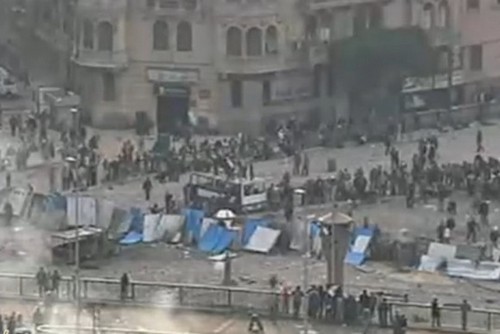 It should be remembered that Egypt’s elite of multi-millionaires has benefited enormously from its set of corrupt bargains with the US and Israel and from the maintenance of a martial law regime that deflects labor demands and pesky human rights critiques. It is no wonder that to defend his billions and those of his cronies, Hosni Mubarak was perfectly willing to order thousands of his security thugs into the Tahrir Square to beat up and expel the demonstrators, leaving 7 dead and over 800 wounded, 200 of them just on Thursday morning.

It might seem surprising that Mubarak was so willing to defy the Obama administration’s clear hint that he sould quickly transition out of power. In fact, Mubarak’s slap in the face of President Obama will not be punished and it is nothing new. It shows again American toothlessness and weakness in the Middle East, and will encourage the enemies of the US to treat it with similar disdain.

The tail has long wagged the dog in American Middle East policy. The rotten order of the modern Middle East has been based on wily local elites stealing their way to billions while they took all the aid they could from the United States, even as they bit the hand that fed them. First the justification was the putative threat of International Communism (which however actually only managed to gather up for itself the dust of Hadramawt in South Yemen and the mangy goats milling around broken-down Afghan villages). More recently the cover story has been the supposed threat of radical Islam, which is a tiny fringe phenomenon in most of the Middle East that in some large part was sowed by US support for the extremists in the Cold War as a foil to the phantom of International Communism. And then there is the set of myths around Israel, that it is necessary for the well-being of the world’s Jews, that it is an asset to US security, that it is a great ethical enterprise– all of which are patently false.

On such altars are the labor activists, youthful idealists, human rights workers, and democracy proponents in Egypt being sacrificed with the silver dagger of filthy lucre.

Mubarak is taking his cues for impudence from the far rightwing government of Israeli Prime Minister Binyamin Netanyahu, which began the Middle Eastern custom of humiliating President Barack Obama with impunity. Obama came into office pledging finally to move smartly to a two-state solution of the Israeli-Palestinian conflict. The Netanyahu government did not have the slightest intention of allowing a Palestinian state to come into existence. Israel was founded on the primal sin of expelling hundreds of thousands of Palestinians from their homes in what is now Israel, and then conniving at keeping them stateless, helpless and weak ever after. Those who fled the machine guns of the Irgun terrorist group to the West Bank and Gaza, where they dwelt in squalid refugee camps, were dismayed to see the Israelis come after them in 1967 and occupy them and further dispossess them. This slow genocide against a people that had been recognized as a Class A Mandate by the League of Nations and scheduled once upon a time for independent statehood is among the worst ongoing crimes of one people against another in the world. Many governments are greedy to rule over people reluctant to be so ruled. But no other government but Israel keeps millions of people stateless while stealing their land and resources or maintaining them in a state of economic blockade and food insecurity.

The policy of the United States has been for the most part to accommodate this Israeli policy and to collaborate in the maltreatment of the Palestinians. Those states and groups that refuse to acquiesce in this egregious policy of epochal injustice are targeted by the US Congress for sanctions and branded terrorists and aggressors. As a sop to all the hundreds of millions of critics of the serial rape of the Palestinians, the US at most occasionally makes noises about achieving a “state” for them, which, however, would have no real sovereignty over its borders, its land, its air or its water. The price of such a eunuch state would be for the Palestinians to renounce their birthright and acquiesce in their expropriation and reduction to the flotsam of the earth.

And the Netanyahu government even disdained the tepid proposals of the Obama administration, for such an emasculated Palestinian “state”, which had to be willing to recognize Israel as a “Jewish” state, thus implicitly denaturalizing the 20% of the population that is Palestinian Christians and Muslims.

Because Israel’s enterprise in denying Palestinian statehood is so unnatural and so, at its fundament, immoral, it can only be pursued by the exercise of main force and by the infusion of billions of dollars a year into a poverty-stricken region. The US has in one way or another transferred over $100 billion to Israel so as to ensure it can remain a tenuous fortress on the edge of the Mediterranean, serving some US interests while keeping the millions of Palestinians in thrall.

US military aid to Israel allowed that country to prevail over Egypt in 1967 and 1973, and forced the Egyptian elite to seek an exit from ruinous wars. Anwar El Sadat decided ultimately to betray the hapless Palestinians and seek a separate peace. For removing all pressure on Israel by the biggest Arab nation with the best Arab military, Egypt has been rewarded with roughly $2 billion in US aid every year, not to mention favorable terms for importation of sophisticated weaponry and other perquisites. This move allowed the Israelis to invade and occupy part of Lebanon in 1982-2000, and then to launch massively destructive wars on virtually defenseless Lebanese and Gaza Palestinians more recently. Cairo under Mubarak is as opposed to Shiite Hizbullah in Lebanon and fundamentalist Hamas in Gaza as is Tel Aviv. The regime of Hosni Mubarak appears to have taken some sort of bribe to send substantial natural gas supplies to Israel at a deep discount. It has joined in the blockade against the civilians of Gaza. It acts as Israel’s handmaid in oppressing the Palestinians, and is bribed to do so by the US.

The US-backed military dictatorship in Egypt has become, amusingly enough, a Bonapartist state. It exercises power on behalf of both a state elite and a new wealthy business class, some members of which gained their wealth from government connections and corruption. The Egypt of the Separate Peace, the Egypt of tourism and joint military exercises with the United States, is also an Egypt ruled by the few for the benefit of the few.

The whole system is rotten, deeply dependent on exploiting the little people, on taking bribes from the sole superpower to pursue self-defeating or greedy policies virtually no one wants or would vote for in the region.

So the Palestinians objected to Obama’s plan to start back up direct negotiations with the Israelis in 2009, on the grounds that the Israelis were rapidly colonizing the Palestinian West Bank and were taking off the table the very territory over which negotiations were supposedly being conducted. Even the corrupt and timid Mahmoud Abbas, whose term as president has actually ended but who stayed on in the absence of new elections, demanded an end to new Israeli colonies in Palestinian territory (including lands unilaterally annexed to the Israeli district of Jerusalem in contravention of international law).

The Obama administration thought it had an agreement from Netanyahu to freeze settlements, and sent Joe Biden out to inaugurate the new peace promise. But when Biden came to Israel, he was humiliated by an Israeli announcement that it would build a new colony outside Jerusalem on land that Palestinians claimed. Then when the ‘settlement freeze’ in the West Bank proper came to an end during negotiations, Netanyahu announced that it would not be extended.

In other words, Netanyahu has since early 2009 taken billions in American money but told the US government to jump in a lake. The Obama administration did nothing, nothing whatsoever to punish this outrageous behavior.

So it can come as no surprise that Obama, Biden and Secretary of State Hillary Clinton have been humiliated by Hosni Mubarak of Egypt. They told him to transition out of power. Instead, he on Wednesday and Thursday initiated the Massacre of Liberation Square, which has wounded nearly 1,000 people, most of them peaceful protesters.

Just as Netanyahu takes Washington’s billions but then pisses all over American policy objectives with regard to erecting a Palestinian State Lite, so Mubarak has stuffed tens of billions of dollars from Washington into his government’s pockets but has humiliated and endangered the United States.

When Netanyahu steals Palestinian property or deprives Gaza Palestinians of their livelihoods, and when Mubarak uses American military aid to crush a popular demonstration, they underline to the peoples of the Middle East that their corrupt and unacceptable situation is underwritten by Washington. That message generates fury at the United States.

As long as the president and the Congress are willing to lie down and serve as doormats for America’s supposed allies in the Middle East– out of a conviction of the usefulness of their clients and the inexpensiveness of putting them on retainer– there will be anti-Americanism and security threats that force us to subject ourselves to humiliating patdowns and scans at the airport and an erosion of our civil liberties every day. We are only one step away of being treated, with “protest zones” and “Patriot Acts” just as badly as the peaceful Egyptian protesters have been.