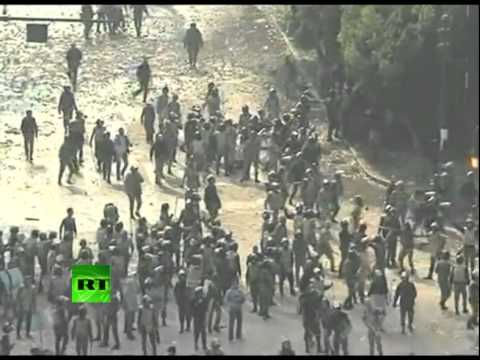 Demonstrations and clashes continued in downtown Cairo for the third day on Sunday, as protesters rallied against the police crackdown on Saturday, which entailed use of live ammunition and left 10 dead of 500 wounded. They demanded that the Egyptian military immediately step down, and continued to reject the appointment of a Mubarak-era prime minister, economist Kamal al-Ganzouri, as caretaker PM.

Emotions ran high in the wake of attack of police on women, including beatings and tearing off their clothes in public. The Cairo protests appear to be dominated by leftist youth groups. The demonstrators are also demanding presidential elections be moved up from June to January. In downtown Cairo, the Brotherhood is alleged to have declined to attend the rallies. (It has been focusing on winning parliamentary elections).

RT has published the disturbing video footage of extreme police brutality against the protesters, including their assault on a women in black modest clothing, who was exposed and stomped on.

A phalanx of women volunteers sought on Sunday to form a buffer between police and demonstrators.

Demonstrations were also held elsewhere in provincial cities, and these were sponsored by the Muslim Brotherhood or the Salafis, the religious forces that have done best in the elections for the ower house of parliament, now being held in three rounds. al-Masry al-Yawm writes, “In Sharqiya, thousands of protesters accused the military council and the government of conniving with the former regime against the interest of the people.” In Alexandria, both the Muslim Brotherhood and the Coptic Church demanded that compensation be paid the victims of police brutality.

The Egyptian military is probably attempting to split the general population from the revolutionary, left-leaning youth. They likely deliberately put al-Ganzouri in, knowing that he is generally popular in Egypt but would be completely unacceptable to the revolutionaries.

Then they probably tried to provoke the peaceful protesters in front of the cabinet building to violence with their use of extreme brutality, so as to depict them as the trouble-makers. They may also have hoped to hang the Egyptian bad economy on the disruptions of the protesters (who are blamed for keeping tourists away and interfering the return of a normal economy.

If the military can keep the youth lefists from allying with the Muslim Brotherhood, and can depict them as wild men to the Egyptian middle classes, then the officers think they might be able to remain in power, with a fig leaf of an elected parliament.

Meanwhile, the early results coming in from the second round of elections show that religious forces continue to dominate, with the Muslim Brotherhood’s Freedom and Justice Party pulling in about 40% of the vote and the hard line Salafi fundamentalists gaining as much as 30%.