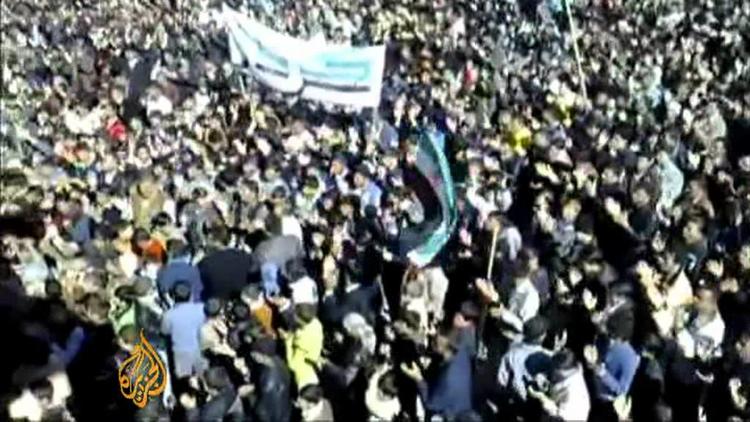 The world condemned the Syria regime’s brutal crackdown on its own people at the UN General Assembly on Thursday. What would be the response of the ruling Baath Party? We didn’t have to wait long to find out.

On Friday morning, the Syrian armed forces subjected Baba Amr in Homs to one of the fiercest bombardments yet in the 14-day-old regime attempt to take back control of the rebellious city. Some observers allege that at the same time the regime’s hold on the north of the country has weakened. Revolutionaries appear also to have taken control of much of the city of Idlib.

At the UN, the Arab League presented a Saudi Arabian-crafted statement on Syria to the General Assembly. It condemned the state’s crackdown, which has cost thousands of civilian lives Of 193 nations, 137 voted in favor the resolution condemning the ruling Baath regime. Only 12 opposed, including Russia, China, Iran and Latin American friends of Iran, including Venezuela and Ecuador. (Venezuela is pledged to deliver oil to Syria at a time that it is facing economic sanctions and boycotts in other quarters.). The rest of the nations were absent or abstained.

The General Assembly vote was pursued by the Arab League out of knowledge that Russia and China would veto any strong censure at the level of the Security Council, as happened recently. Russia and China have trade interests in Baathist Syria, and also dislike the very idea of outside interference when putting down a popular revolt.

Unfortunately, the UNGA vote has no direct legal consequences. Unlike the UNSC, it cannot authorize the use of forces. It cannot refer cases to the International Criminal Court. The vote is symbolic more than anything else, and the Syrian opposition used it to advantage in video made after the resolution.

The world body’s vote came a day after Syrian President Bashar al-Assad pledged a February 26 vote in a referendum on a new constitution that would end Syria’s one-party state. Much of the opposition has decided to boycott the polls, believing that the whole thing is a stunt.

Meanwhile, on Thursday Pulitzer-prize winning journalist Anthony Shadid died in Syria of an asthma attack. He had sneaked in from Lebanon to find out more about the military wing of the opposition. Lebanese-American Shadid made his mark with his belief in the dignity of the Arab citizen, his searching and humane intelligence, and his knowledge of Arabic, gained initially as a student in university Arabic classes. He set a high bar indeed for younger journalists who will come after him.