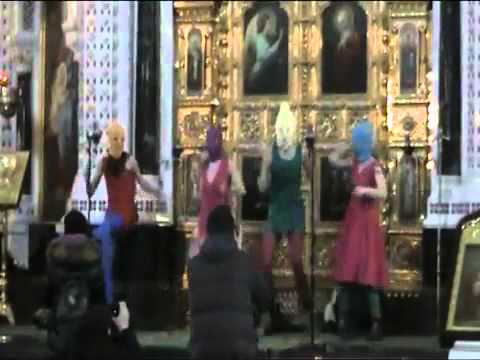 The sentencing of members of the Russian punk rock band, Pussy Riot, to two years in prison for a protest song they sang in an Eastern Orthodox cathedral against Vladimir Putin, now president of the Russian Federation, has blackened the name of the second Russian republic abroad in a way its support for the murderous regime of Bashar al-Assad ought to have done.

The lack of public support in Russia for the band members, Nadezhda Tolokonnikova, 22, Marina Alyokhina, 24, and Yekaterina Samutsevich, 30, mirrors the Russian public’s lack of support for revolutionaries in Libya and Syria. Outsiders, especially on the British and American fringe left, have sometimes suggested that Russia fears that religious fundamentalism in the Middle East will overthrow secular, modernizing regimes like those of Qaddafi and Bashar al-Assad.

But the prosecution of the band members on behalf of the Russian Orthodox Church and in the name of protecting the reputation of the increasingly authoritarian president underline the reactionary roots of Russia’s contrarianism. This stance is not that of a progressive afraid of religious obscurantism, but rather of an almost nineteenth-century conservatism. That is, Bashar al-Assad is playing Tolstoy’s Hadji Murad, and Putin reveals himself terrified of the passions that might be unleashed by a punk version of the Kreutzer Sonata.

Repression at home and repression abroad, however incommensurate they may be, involve a fight against “hooliganism.”

“ Hooligan” is a relatively recent coinage, appearing first in a British newspaper in the summer of 1898. It likely was a corruption of the Irish name Houlihan, and perhaps a reference to a character in a comedic music hall song.

Communists, who rather liked rowdiness when capitalists were in power but disdained it once they had captured the offices of state, adopted the term into Russian as khuligan, referring to people insufficiently respectful of the law and of social discipline.

The Baath Party in Syria is sufficiently influenced by Soviet Marxism that it translated the phrase ‘hooliganism’ into Arabic, and uses it routinely to refer to the Syrian rebels.

Hooliganism deserves to have its murky etymology, since it is a term of inherently bad faith. Vandalism is rightly categorized as a crime, but it is a crime clearly visible to all.

Hooliganism, in contrast, is virtually undefined and might well simply be regime code word for ‘having a bad attitude.”

Many of the first revolutionaries in Syria, in spring-summer 2011, actually bore some resemblance to Pussy Riot. Fadwa Sulaiman, an Alawite film star, launched a hunger strike to protest the imprisonment of dissidents.

Or there is the “Freedom Generation” band in Homs, one of whose members explained its goal as:

“to make the world see, and make the regime’s leaders realize, that we are not ignorant and we know what we want. They try to portray us as ignorant, but all we lack as Syrians is freedom and dignity.”

Only when the protesting youth and artists were viciously repressed and tank turrets turned on them did elements of the population turn to violence and create the Free Syrian army.

The Russian Federation should have been a gift to a globalizing world in the early 21st century. A highly educated population, a sophisticated scientific establishment, a population grateful to have escaped the clutches of totalitarianism but clear-eyed about the predatory character of much of late capitalism, should have contributed a new, progressive vision.

Instead, Russia’s Vladimir Putin seems intent on making his country a dreary reactionary state, authoritarian, supportive of a national church (much of the ‘hooliganism’ attributed to Pussy Riot was a protest performance in a cathedral; they may as well have been convicted of blasphemy). And putting it that way makes it clear how Putin is unwittingly drawing close to the reactionary governments of the old Middle East as a social and political model– hydrocarbon cartel state and conventional social repression.

The verdict, in other words, is a Salafi verdict, a verdict of the sort Putin says he is afraid will become common in Syria if the rebels win. He is a hypocrite.

That the Pussy Riot members and the Syrian revolutionaries are both being described with a Soviet term of opprobrium drawn from British anti-Irish racist stereotypes points to the staid, conventional banality of evil that lurks in Vladimir Putin’s notion of order.

Here’s a video of Pussy Riot’s piece of hooliganism: