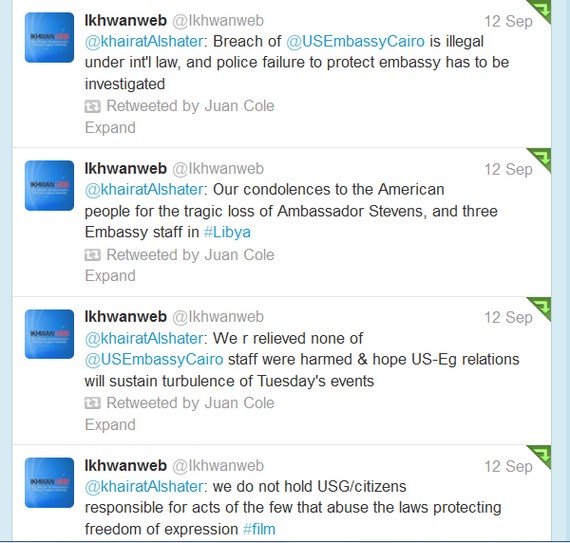 The attack on the US consulate in Benghazi happened because the Libyan government is still weak, rebuilding after its revolution against Muammar Qaddafi. But there was no doubt that the new government was a friend of the US ambassador who was killed, Chris Stevens, or that it would mobilize to deal with the cells of the Ansar al-Shariah extremists that launched the attack. Pro-America demonstrations regretting the attack on the consulate have been held all over Libya.

The puzzle comes in Egypt, where the government and security forces are strong, but were not deployed in force to protect the US embassy (unlike in the past), and where newly elected president Mohammad Morsi, of the Muslim Brotherhood’s Freedom and Justice Party, did not explicitly condemn the small crowd that tried to invade the embassy grounds on Tuesday and which tore down the American flag.

Morsi was no doubt himself offended by the trailer on Youtube of a movie villifying the Prophet Muhammad, and he was probably concerned to not be outflanked by Muslim forces to his right, the Salafi Nour Party or the Gama’ah Islamiya (formerly a terrorist organization that has given up violence). But his declining to make a firm statement in defense of the sanctity of foreign embassies annoyed the Obama administration mightily.

In an interview with Telemundo, President Barack Obama showed his annoyance with Morsi:

“I think that we are going to have to see how they respond to this incident,” Obama said.

“Certainly in this situation, what we’re going to expect is that they are responsive to our insistence that our embassy is protected, our personnel is protected,” Obama said.

Egypt is among about 14 countries designated at “major non-NATO allies” by US presidents. This status recognizes that they do joint military exercises with the US, and gives them special access to advanced US weaponry. However, some of them are not allies in the precise legal sense. That is, there is no obligation of mutual defense. A true ally, as with NATO states, is one that the allied country is pledged to defend from attack. Still, US officials typically have referred to Egypt as an ally, and the State Department made clear that it continues to do so.

So Obama was technically correct that Egypt is not an ally in the sense that Britain or even Turkey is. But unlike what some media outlets wrote, this statement was no gaffe. Rather, Obama was playing hardball with Morsi, trying to impress upon him that the status of ‘major non-NATO ally’ is not automatic now that the Muslim Brotherhood is in control. It will have to be re-earned, at least from Obama’s point of view. And the lack of response on the embassy attack is not consistent with ally status. Non-NATO ally status is bestowed by a stroke of the presidential pen, so Obama could take it away.

White House spokesman Jay Carney added on Thursday that “Obama spoke with President Mohamed Morsi, the first Islamist leader following an uprising which toppled Mubarak last year, on Wednesday and impressed upon him the need to protect US diplomats…”

Under Obama’s pressure, Morsi, in Brussels seeking European aid, finally explicitly condemned Tuesday’s attack on the US embassy in Egypt:

“we don’t accept, condone, or approve at all for there to be attacks on embassies, consulates or people, or killing in any way.”

“We want to cooperate with the entire world and we are cooperating now with the E.U. and the European people and with the American people and others and the U.S. administration to prevent such practices in the future. Also, we insist on the protection of persons, properties and embassies. The Egyptian people are very civilized and could not ever express their rejection of such practices with an attack on an embassy or person or consulate.”

Some of Morsi’s sudden willingness to say all this was fueled by Obama’s pressure. In addition, Morsi revealed some of his other motives:

“Muslims and Christians in Egypt are equal citizens and have the same rights… We are cautious about those principles and human values, also respecting visitors and respecting tourists… and respecting and protecting diplomatic delegations and private and public properties, and not attacking them.”

That is, somebody told Morsi he had to say something if he wanted to keep the tourist trade, much less the American alliance!

Morsi was also upstaged before his Brussels statement by the number two man in the Muslim Brotherhood, Khairat al-Shater, who tweeted his condemnation of the embassy attacks, and his tweets were picked up by the Brotherhood twitter account, @Ikhwanweb. Al-Shater, a wealthy businessman, may be as much Morsi’s rival as his colleague.

Since the Muslim Brotherhood was at the same time whipping up anger over the so-called ‘film’ (which is a hoax) smearing the Prophet Muhammad, and pledging big anti-American demonstrations for today, Friday, the freewheeling US embassy twitter account in Cairo objected. Thanking @Ikhwanweb for the al-Shater statements, the embassy suggested the Brotherhood check out its Arabic feed. “I hope you know we read those, too,” it said.

Under all this pressure, and given the continued violent but small demonstration in front of the US embassy on Thursday and into Friday morning, the Secretary General of the Muslim Brotherhood, Ahmad Hussein, appeared to back off calls for a big demonstration on Friday. Ironically, the Salafi fundamentalists who are to the right of the Muslim Brotherhood had already said that any demonstrations should be held far from the US embassy. Its spokesman said, that it “strongly condemns using violence and vandalism to express our objections to this offensive work, especially if protesting involves attacking embassies and terrorising diplomatic missions.” When the Salafis are the adults in the room, the Brotherhood is looking pretty bad. Even worse, the former terrorist organization, now a civil society association, the al-Gama’ah al-Islamiya or Islamic Bloc, called the tearing down of the American flag on Tuesday “illegal and against Islamic Law.” That is still more than Morsi has said.

By Friday morning, a couple hundred protesters at the US embassy had been at least slightly injured by the advance on them of riot police, and three dozen had been arrested. Police and armored vehicles pushed the protesters away from the embassy toward Tahrir Square.

In Libya, the just-installed government of Prime Minister Mustafa Abushagur arrested several suspects from the Ansar al-Shariah (‘supporters of the holy law’) group as suspects in Tuesday’s attack on the US consulate. The Ministry of Defense announced that it was determined to dismantle the Ansar. The group is denying involvement in the consulate attack, and its leader, hard line fundamentalist Ismail Salabi, is denying a report that he went on the radio and approved of the attack. Obama sent two war ships to Libya, though the gesture is symbolic.

In Yemen, where the US is involved in a dirty, secret drone war against Sunni fundamentalists, some 4000 protesters assaulted the US embassy. An expeditionary force of Marines is on their way to Sanaa to protect it. Elsewhere in the Muslim world, the demonstrations on Thursday against the so-called film (apparently made by an Egyptian, and with which the US government has nothing to do) were tiny, just a few hundred in each place. We’ll see about Friday. My guess is that this whole controversy will die down soon, without much long-term impact on US foreign policy or foreign relations.

As for why people in the region should be so touchy, Abdel Bari Atwan of al-Quds al-Arabi wrote, according to the translation of the USG Open Source Center:

US interferences in Arab and Muslim affairs in favor of Israel, its occupation, and Judaization of the holy places, and the US’s embrace of groups hostile to Islam and Muslims are the main reason for the current scourge and instability, and even wars in our countries. This provocation must immediately cease if the United States wants to secure its interests and the security of its embassies and citizens.”

Al-Atwan is wrong that the US government could have done anything about that Youtube trailer, but that there is a pre-existent store of ill-will toward the US for the reasons he suggests would be hard to deny.

Still, Obama has enough assets in his contest with Morsi to influence the Egypt situation– loan reduction, civilian and military aid, and the danger that a US State Department travel warning could devastate Egypt’s tourist industry, which is worth billions a year. Even Obama’s willingness to play a politics of reputation with Morsi’s Egypt seems to have had some effect. It wasn’t a ‘gaffe.’