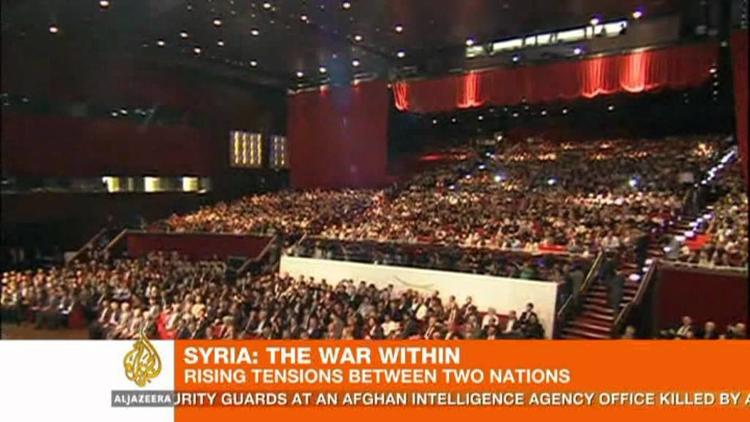 Tensions between Turkey and Syria are at an all-time high, with the two countries trading occasional light artillery barrages at the border and massing tanks on either side of it.

In the midst of this military posturing, on Saturday Prime Minister Tayyip Erdogan addressed the Istanbul World Forum (kind of a small Middle Eastern version of the Davos conference) and criticized the UN and implicitly the Russian Federation for inaction on the Syrian civil war, in which as many as 150 persons a day are dying.

Erdogan recalled the Bosnia genocide by far rightwing Serb nationalists in the 1990s, when the UN Security council was also paralyzed. Erdogan did not mention Russia, but it was clear that he was slamming Moscow for obstructionism then and now. The reference to the Balkan crisis in the Clinton era also served implicitly as a call to NATO to step up to its responsibilities (Turkey is a NATO member and has asked for moral support in the face of occasional Syrian artillery barrages that landed on a Turkish village to the north of Syria and harmed locals).

NATO and Europe seem unlikely to pay more than lip service to Turkey’s calls for support in its confrontation with Damascus.

The prime minister also called for the expansion of the UN Security Council (now comprised of the victors of WW II – the US, Russia, France, Britain, and China) to include rising powers such as Brazil and South Africa and other members of the G20 (perhaps implying that Turkey itself, now the world’s 18th largest economy [in nominal terms], deserves a seat).

Agence France Presse reports that Syria has banned Turkish passenger flights from Syrian airports, as part of a sharp deterioration in relations between Damascus and Ankara. This past week, Turkey forced a Russian passenger plane flying through Turkish air space on its way to Syria to land, and claimed it found military cargo aboard.

Aljazeera English reports on the tensions and on Erdogan’s speech:

On Saturday, rebel fights claim to have shot down a Syrian fighter jet in the north of the country, and as fighting raged in Aleppo, part of that city’s historic Umayyad mosque was said to have been burning.