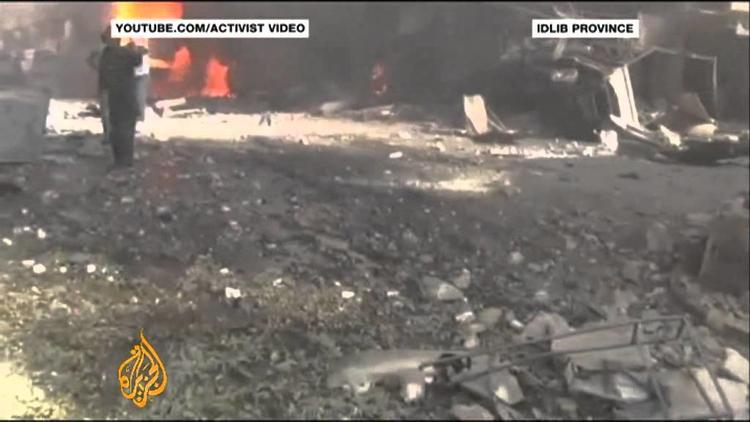 American politics is mainly about domestic issues, and the presidential election season has caused a sort of black out of international news on US networks for the most part. But the planet is still out there, even if inhabitants of the large island that is the United States may find it difficult to believer (or difficult to take interest in). Whoever wins the presidency will have to deal with a whole passel of crises that have worsened in the past month.

1. The Syrian revolution/ civil war is lurching from violent to more violent. On Monday, AFP reports two car bombings an air raid, and other fighting. A car bomb in the Mazzeh district killed 11. That neighborhood is largely Alawi Shiite, but it also has some embassies. Some 11 bystanders were killed. President Bashar al-Assad and the elite of the ruling Baath Party belong to the Alawi sect, though the regime still has significant Sunni support. In Hama, a big bomb killed 50 Syrian soldiers, according to opposition sources in Britain, though the regime contested this body count, saying only 2 were killed. The Hama bombing was thought to be the work of al-Nusra Front, a radical Sunni Muslim group. The regime also bombed rebel positions in Idlib province from the air, killing 20 rebel fighters in one town, and killing 14 civilians in another. Fighting continued in Aleppo, the country’s largest single city.

The Baath regime seems to me to control marginally less territory every day, and seems to be in very slow motion collapse.

2. The Bahrain version of the Arab Spring continues to boil along, with the Shiite majority and its Sunni dissident allies demanding more democracy and fairer policies from the authoritarian Sunni monarchy. On Monday, five small homemade bombs were set off in the capital, Manama, killing two South Asian guest workers and wounding a third. The violence comes after the government banned all protests. Anti-government rallies have gone on being held, especially in Shiite towns and villages outside the capital.

Only when the Sunni king offers more genuine democracy for his majority-Shiite population will this violence die down. Since the ruling family cannot see the dangers here, it is up to the US president to try to resolve the dispute. The HQ of the US Fifth Fleet is at Manama, the capital of Bahrain.

3. Although most Americans don’t seem to realize, or want to know, that we are fighting a fairly major and ongoing war in Afghanistan, it is still there. The country suffers from an erratic president, a resurgent Taliban movement, and truly impressive levels of corruption. The US plan, of training up a 400,000-man army and security force that could successfully repress the neo-Taliban, is probably unrealistic. But with a December 2014 deadline for the withdrawal of US troops, The plan is going to be sorely tested over the next few months.

4. Iran is still out there, and says it is willing to hold talks with the US over what it says is a civilian nuclear enrichment program. Diplomacy is likely the only way effectively to resolve the Iran crisis, and the US and its allies should get Iran back to the bargaining table.

Although the Obama administration says it wants to ‘rebalance’ toward the Pacific rim nations, the Middle East continues to be a strategic concern of the US. The next president will have to decide almost immediately how to react to these crises.