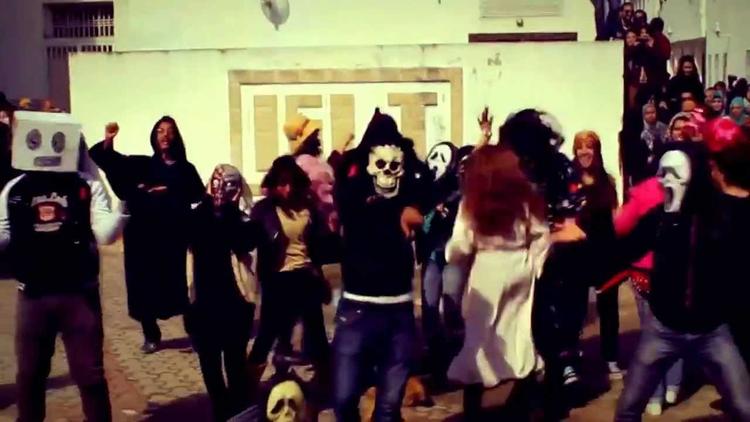 Hard line Salafi fundamentalists (who are small fringe in Tunis) showed up at a language school in Tunisia’s capital on Wednesday to attempt to stop the filming of a video clip of the Harlem Shake, electronic-music performer Baauer’s internet sensation in the Trap genre. One of the Salafis had on military khakis and carried a molotov cocktail, which he did not use. They shouted at the students that their brothers in Palestine were suffering and they were dancing. The students at the language school drove off the Salafis and went on with their filming.

The Minister of Education, however, appears to agree that the filming of the dance at the school was inappropriate, and is making noises about expelling the students involved. In turn, that threat has provoked calls for a public demonstration against the government in downtown Tunis that will involve mass performance of the Harlem Shake.

This is the kind of thing the Salafis were trying to stop (filmed at the Superior Institute of Languages in Tunis):

A section of the Tunisian Salafis have adopted essentially al-Qaeda tactics. Since they are small and fanatical and powerless, terrorizing people appeals to them as a form of social control. They attacked the US embassy and an international school in Tunis last September, and before that had made trouble at an art gallery in upscale La Marsa. The Tunisian government has blamed them for the assassination on February 6 of secular politician Chokri Belaid, which threw the country into political crisis and caused the fall of the Hamadi Jebali government. The cabinet is dominated by the Ennahda Party, a party of the religious Right, but which is substantially to the left of the Salafis. Some secular Tunisians have alleged to me that Ennahda uses the Salafis as shock troops, while others simply accuse the Ennahda government of not being interested in cracking down on any movement of the religious Right.

The Tunisian Revolution of 2011 was a mass movement that began in poor, small provincial towns influenced by the religious Right, but which eventually caught up many in the urban middle classes of a more secular bent. The revolution was coterminous with a set of youth movements. Once the revolution succeeded in overthrowing the dictator Zine El Abidine Ben Ali, and high politics went into the hands of older former dissidents, the revolutionary youth– many of them leftists, secularists and connected to world youth culture– were often marginalized and their desire for greater personal liberty and political and cultural openness disregarded. The Ennahda Party played only a minor role in the revolution, but its minister of culture promptly, on taking power, uninvited Lebanese pop music icons Nancy Ajram and Elissa from the 2012 Carthage Festival, apparently on the grounds that their performances are not PG enough. Most Tunis youth greeted that decree with derision. (I can’t personally understand the religious Right’s targeting of Nancy Ajram, who seems to me pretty wholesome, and probably is looked upon as superficial by the devotees in Tunis of Trap music).

A conflict between religious-right puritanism and Tunisia’s secular youth culture is an on-going feature of the post-revolutionary process. While a crackdown on the Harlem Shake is not earthshaking in itself, it is significant if it is part of the same yearning for social control and imposed conservatism that animated the Salafis to attack an embassy and assassinate a secular politician. In essence, unless the Harlem Shake wins, Tunisia loses.