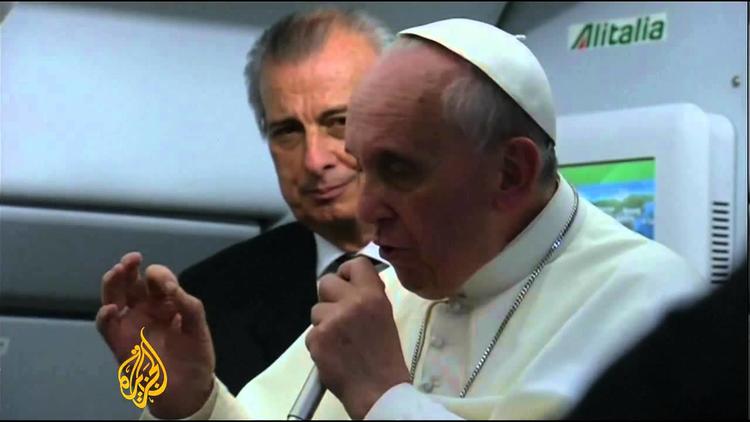 Pope Francis comes across in the media as a person who cares for others, and his genial personality, it seems to me, allows him to restate conservative principles in ways that inspire hope in or do not alienate liberals. But liberals need to listen to him carefully to hear the unyielding steel in his voice. There won’t be any women priests, he says, and the Church isn’t doing a good enough job explaining the theological reasons for that. Feminist nuns, he is implying, are just theologically illiterate.

He made some off the cuff remarks on the plane back from Rio to Rome, among them that gays could be priests as long as they weren’t part of a “gay lobby” and that it wasn’t up to him to judge [celibate] gays in the priesthood:

Pope Francis had earlier complained about a “gay lobby” among priests in the Vatican, and here he refers to the “lobby” again, saying all lobbies are bad.

So it seems to me that Pope Francis is just saying what many evangelicals say– hate the sin, love the sinner, celibate gays are welcome in the congregation, etc. And he’s putting a further precondition on acceptance, that gays not band together as a pressure group. So they have to be celibate and seen but not heard, sort of like children.

This sentiment is more charitable than that of his predecessor, Pope Benedict, who said that gays of any sort weren’t fit for the priesthood. But only by neglecting to attend to nuance and context could what the Pope said be seen as a win for gays (and lets face it, it is only gay men that are even being talked about because their presence in the priesthood is what is at stake).

Pope Francis is perhaps just being realistic. There is a severe shortage of priests in the world, since hetero young men are increasingly difficult to attract into that life. Some Catholics feel this lack of priests deeply. By being less judgmental toward gay men in the priesthood, Pope Francis is slightly expanding the recruitment pool. The tendency in the West to accept gays and to allow gay marriage now, though, may mean that priestly celibacy is increasingly no more appealing now to gays than to heteros.

There is a lot to like about Pope Francis. He wants to see the church serve the poor instead of primarily the elite (though again, he is no liberation theologian and isn’t interested in practical steps that would change class relationships– he is just interested in doing charity). It is also true that the evangelicals have poached the poor Catholics in Brazil. I visited a favela or slum in Rio once and asked about people’s religious practices there. My host was taken aback that I didn’t know, saying they were all evangelical Protestants as far as the eye could see. The church in Latin America has traditionally served the Establishment, and Pope Benedict wanted to keep it that way. But then Benedict said he wanted a smaller, more disciplined church. (He got a smaller one, not sure if it is more disciplined).

In my view Pope Francis’s really interesting comments in Brazil were on the issue of the poor and on Amazon conservation (which also has to do with how indigenous people are treated). If the churches would develop a green theology it would help us in the struggle against global climate change.

American culture displaces its severe class struggle away from economic issues onto identity politics. We avoid talking about how the working and middle classes are being screwed over by an increasingly wealthy and aristocratic 1% or about how the business classes are destroying the environment of the planet, by obsessing about race and gender instead. So Pope Francis’s tame remarks about silent, inoffensive, celibate gays being all right in the priesthood will generate a lot of comment.

His more challenging remarks, his focus on the needs of the poor and on preserving the environment– the messages well-off Americans need to hear– will be largely ignored in the corporate US media.