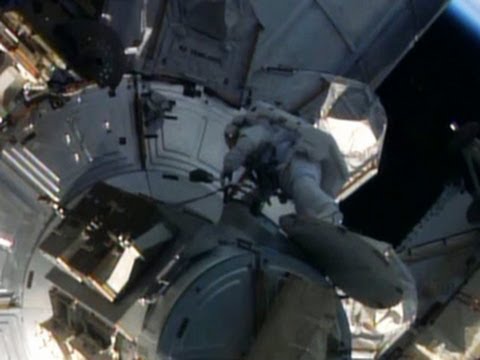 CBS reports on today’s space walk by astronauts to repair the cooling system at the International Space Station:

The National Aeronautics and Space Administration reports on its achievements and breakthroughs in space and on earth in 2013.

And here is the NASA press release covering these developments:

In 2013, NASA helped U.S. commercial companies transform access to low-Earth orbit and the International Space Station even as one of the agency’s venerable spacecraft was confirmed to have reached interstellar space, and engineers moved ahead on technologies that will help carry out the first astronaut mission to an asteroid and eventually Mars.

“Even in a time of great change and transition, NASA employees stayed focused on what it takes to get the job done — returning space station resupply launches and the jobs they support back to the United States, developing cutting-edge technologies that will help us send American astronauts to an asteroid and Mars, uncovering new knowledge about our home planet and the universe and helping develop cleaner and quieter airplanes,” NASA Administrator Charles Bolden said. “It’s all the hard work and dedication from the NASA folks on the frontlines that keep the United States the world’s leader in space exploration.”

The following are some of NASA’s top stories this year:

Commercial Space Progress
A little more than two years after the end of the Space Shuttle Program, NASA has returned the International Space Station resupply missions to the United States in a powerful partnership with U.S. companies SpaceX and Orbital Sciences, who are investing here and creating good-paying jobs for American workers.

Enabling Deep Space Exploration
The primary destination of these commercial launches, the International Space Station, celebrated 15 years in orbit in November, and crew members have lived and worked aboard the station non-stop since October 2000.

2013 was a year of progress toward new capabilities as the agency’s new Space Launch System (SLS) heavy lift rocket completed its preliminary design review and the Orion multipurpose crew vehicle reached many milestones on its path to undertake its first flight test in 2014. The heat shield that will protect Orion on that mission’s re-entry next year was delivered to the Kennedy Space Center for installation; NASA reached an agreement with the European Space Agency (ESA) to partner on the spacecraft’s service module; and Orion itself underwent loads testing, a water recovery test, and full power-up.

NASA and 12 of its international partners released a Global Exploration Roadmap, sending a clear signal that the global community is committed to a unified strategy of deep space exploration, with robotic and human missions to destinations that include near-Earth asteroids, the moon and Mars.

Asteroid Mission
The public imagination has been captured by the mission NASA announced in April to redirect an asteroid into a stable retrograde orbit in the vicinity of the moon using cutting-edge space technology, such as solar electric propulsion. This will allow astronauts to visit the asteroid, study its characteristics and bring samples home. In November, NASA held a workshop to discuss about 100 of the best ideas the agency has received from around the world about both identifying asteroids and figuring out what to do about those that are a threat, as well as how to best carry out the asteroid redirect mission. The mission formulation review has been completed, and NASA will move into mission baseline discussions in 2014.

The Wide-field Infrared Survey Explorer (WISE) spacecraft, having completed its original mission, was reactivated this year to hunt for asteroids. OSIRIS-REx, NASA’s robotic mission to return samples from an asteroid, moved from formulation to the development phase in 2013.

NASA also announced an Asteroid Grand Challenge to find and characterize asteroid threats and gather ideas for capturing and redirecting an asteroid for human exploration. The public is incredibly interested in asteroids, and the agency expects strong participation in this initiative.

Amazing Science
NASA science this year uncovered new knowledge about our home planet and the farthest reaches of the galaxy. Analysis showed the Voyager 1 spacecraft has entered interstellar space and, at 12 billion miles away, is the most distant man-made object ever created.

The Lunar Atmosphere and Dust Environment Explorer (LADEE) launched in September to study lunar dust and help us better understand other planetary bodies and their formation. It also carried the Lunar Laser Communication Demonstration (LLCD) — breakthrough new technology to improve communication with deep space missions that the agency will continue to refine and advance.

The Landsat Data Continuity Mission (LDCM) was launched in February for the U.S. Geological Survey (USGS) to maintain one of the longest-term imagery data sets about our Earth ever — more than 40 years.

Earth Science continues to be a high priority, and our amazing fleet of Earth-observing satellites helped us see how an amplified greenhouse effect is shifting the northern latitudes’ growing season. A study this year of Landsat data yielded the best view to date of global forest losses and gains during this century.

One of the International Space Station’s most prominent scientific experiments produced its first results in April. The Alpha Magnetic Spectrometer (AMS) is a state-of-the-art cosmic ray particle physics detector located on the exterior of the orbiting laboratory. Scientists hope that by measuring cosmic rays, AMS will provide new data about the formation of the universe, antimatter, and evidence of the mysterious dark matter believed to make up most of the universe.

The Kepler mission awed scientists and the public with new exoplanet findings, including discovery of numerous planets in the habitable zone. NASA will be evaluating Kepler data for years to come, as well as exploring the possibility of doing new science investigations with the spacecraft.

The James Webb Space Telescope, NASA’s successor to the Hubble Space Telescope, continued to move toward its 2018 launch. In November, the telescope’s primary mirror backplane support structure, essentially the spine of the massive telescope, completed a rigorous testing regime. The final three of Webb’s 18 primary mirrors arrived at NASA’s Goddard Space Flight Center in Greenbelt, Md., this month for integration. Once in orbit, the 18 hexagonal mirror segments will work together as one 21.3-foot (6.5-meter) primary mirror, the largest ever flown and the first to deploy in space.

Elsewhere in astrophysics, scientists saw one of the brightest gamma-ray bursts ever with the Fermi, Swift and NuSTAR telescopes and learned more about the black hole at the center of the Milky Way using the agency’s Chandra X-ray Observatory. Fermi celebrated five years in orbit and NASA’s Spitzer Space Telescope celebrated 10 years of incredible science.

Mars
Mars is the centerpiece of NASA’s planetary exploration. The Curiosity rover continues to explore the planet, and in its first year already has accomplished its primary goal of determining that Mars could indeed have supported life in the past, possibly much later than originally thought. Curiosity’s Radiation Assessment Detector instrument is helping scientists assess round-trip radiation doses for a human mission to Mars.

NASA also launched in November its next mission to the Red Planet, the Mars Atmosphere and Volatile Evolution (MAVEN) spacecraft, which will study the Martian upper atmosphere from orbit. NASA’s 2016 InSight mission narrowed its landing sites for Mars while the Mars 2020 team outlined its goals for our next rover to the planet.

Aeronautics – the First ‘A’ in NASA
Here on Earth, NASA continued to mark progress in developing the next generation of air transportation systems (NextGen).

A new computer software tool developed by NASA’s aeronautical innovators — the Precision Departure Release Capability (PDRC) — allows commercial aircraft to be sequenced for takeoff so that they are able to climb directly to their enroute travel altitudes instead of being required to make multiple intermediate level-offs as in the past. NASA officially presented this innovative software to the Federal Aviation Administration (FAA) during a ceremony at the FAA’s headquarters in Washington on Aug. 6. With PDRC, controllers will be able to improve the overall efficiency of air traffic management by reducing missed or delayed departures and allowing more aircraft to depart within a given timeframe.

Developing Technologies for the Future
This year, NASA created a Space Technology Mission Directorate to help advance the cutting-edge technologies it will need for future missions. The agency completed testing on a prototype composite cryogenic propellant tank with a 25 percent reduction in cost and 30 percent reduction in weight, resulting in increased payload capacity.

The agency began the next chapter in NASA’s improved entry, descent and landing capabilities through the completion of a test of a full-scale supersonic inflatable decelerator. The test successfully demonstrated the ability to deploy and pull a large parachute through the dynamic loads it would experience at Mars, using a helicopter to drop the ringsail parachute and a rocket sled to pull the parachute with 90,000 pounds of force. This technology will increase the current capability to land heavy payloads on Mars by as much as 25 percent.

In April and November, NASA sent three Cubesats — two early designs and one more mature — to space as part of the agency’s Small Spacecraft Technology Program. The first three PhoneSats successfully orbited Earth for a week, sending back pictures and demonstrating that an off-the-shelf commercial smart phone can serve as a spacecraft operating computer. The fourth PhoneSat launched in November and is expected to be in space for a year, proving the longevity of a smart phone cubesat in space, powered by solar panels.

NASA strengthened its early stage pipeline with the nation’s brightest and best by engaging in more than 400 activities with 75 accredited U.S. universities to enable future missions and our continued leadership in space. For the third consecutive year, NASA awarded competitive technology fellowships for graduate research on the agency’s most difficult space technology challenges. Sixty-five new fellowships were awarded this year, bringing to 193 the total number of graduate student space technology development efforts funded to-date. Several fellowship graduates already are making an impact in the nation’s aerospace and innovation workforce.

Public Engagement, Economic and Societal Benefits
NASA also continued to transfer the benefits of exploration to improving life on Earth. NASA and Homeland Security, for instance, collaborated on the Finding Individuals for Disaster and Emergency Response (FINDER) prototype to detect life signs in piles of rubble after a disaster. The portable device is based on radar technology NASA uses for planetary exploration.

NASA continues to effectively engage the public, and this year, the International Space Apps Challenge drew more than 9,000 hackers, designers and explorers in 83 cities around the world to contribute their ideas to space exploration missions. The agency’s Minority University Research and Education Program (MUREP) funded 148 interns and continued to help draw minority students into science, technology, engineering and mathematics (STEM) careers.

NASA launched the Exploration Design Challenge (EDC) to teach students about radiation and the challenges it presents for human space exploration. A cooperative effort with Lockheed Martin, the EDC allows students to become virtual crew members on the maiden Exploration Test Flight of the Orion multipurpose crew vehicle, currently scheduled for September 2014. More than 112,000 students are current participants in the EDC, which aligns with the agency’s STEM education priorities.

NASA’s Twitter account, with 5.5 million followers, is the most followed in government while millions also engage with the space program through Facebook, Google+ and other platforms, and the agency’s new Instagram profile drew more than 400,000 followers. NASA’s website had its second-busiest year on record with 115 million visits.

NASA will build on the achievements of 2013 as it looks ahead to a busy new year where the agency is already preparing for more milestones in commercial space, the first flight test of the Orion spacecraft, five Earth Science launches, and many more accomplishments.

For more about NASA’s missions, research and discoveries, visit: