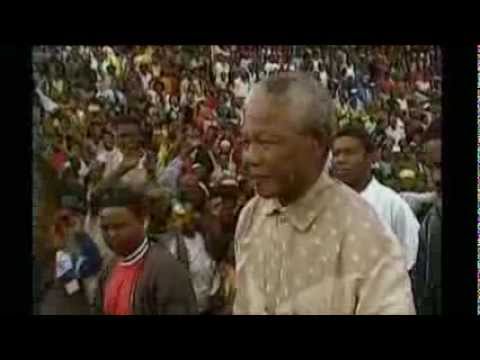 The attempt to make Nelson Mandela respectable is an ongoing effort of Western government spokesmen and the Western media.

I visited Soweto in 2012 and went to Mandela’s old house. It was a moving experience. I don’t want him to be reduced to a commercialized icon on this day of all days.

We should remember that for much of the West in the Cold War, South Africa’s thriving capitalist economy was what was important. Its resources were important. Its government, solely staffed by Afrikaners and solely for Afrikaners, was seen as a counter-weight to Soviet and Communist influence in Africa. Washington in the 1980s obsessed about Cuba’s relationship to Angola (yes).

That the Afrikaners treated black Africans like dirt and discriminated against them viciously, denying them the franchise or any hint of equality, was considered in Western capitals at most an unfortunate idiosyncrasy that could not be allowed to interfere with the West’s dependence on Pretoria in fighting the international Left.

The African National Congress had attempted nonviolent protest in the 1950s, but the white Afrikaaner government outlawed all those techniques and replied with deadly force. In the early 1960s when Nelson Mandela turned to sabotage, the United States was a nakedly capitalist country engaged in an attempt to ensure that peasants and workers did not come to power. It was a deeply racist society that practiced Apartheid, a.k.a. Jim Crow in its own South.

The US considered the African National Congress to be a form of Communism, and sided with the racist Prime Ministers Hendrik Verwoerd and P.W. Botha against Mandela.

Decades later, in the 1980s, the United States was still supporting the white Apartheid government of South Africa, where a tiny minority of Afrikaaners dominated the economy and refused to allow black Africans to shop in their shops or fraternize with them, though they were happy to employ them in the mines. Ronald Reagan declared Nelson Mandela, then still in jail, a terrorist, and the US did not get around to removing him from the list until 2008! Reagan, while delivering pro forma denunciations of Apartheid or enforced black separation and subjugation, nevertheless opposed sanctions with teeth on Pretoria. Reagan let the racist authoritarian P.W. Botha come to Washington and met with him.

Likewise British PM Margaret Thatcher befriended Botha and castigated Mandela’s ANC as terrorists. As if the Afrikaners weren’t terrorizing the black majority! She may have suggested to Botha that he release Mandela for PR purposes, but there is not any doubt on whose side she stood.

The Israeli government had extremely warm relations with Apartheid South Africa, to the point where Tel Aviv offered the Afrikaners a nuclear weapon (presumably for brandishing at the leftist states of black Africa). That the Israelis accuse Iran of being a nuclear proliferator is actually hilarious if you know the history. Iran doesn’t appear ever to have attempted to construct a nuclear weapon, whereas Israel has hundreds and seems entirely willing to share.

In the US, the vehemently anti-Palestinian Anti-Defamation League in San Francisco spied on American anti-Apartheid activists on behalf of the Apartheid state. If the ADL ever calls you a racist, you can revel in the irony.

Ronald Reagan imagined that there were “moderates” in the Botha government. There weren’t. He wanted “constructive engagement” with them. It failed. The Afrikaners imposed martial law. Reagan tried to veto Congressional sanctions on Pretoria in 1986 but Congress over-rode him.

Nelson Mandela was a socialist who believed in the ideal of economic equality or at least of a decent life for everyone in society. He was also a believer in parliamentary government. So, he was a democratic socialist.

The current Republican Party is implementing Apartheid policies of making it difficult for minorities to exercise their right to vote. And they are changing tax laws to throw ever more of society’s wealth to the top 1%. And they just threw millions of Americans off food stamps, including children and Veterans. The US House of Representatives still stands against everything Mandela stood for.

President Obama first became interested in politics at Occidental College in California and attended anti-Apartheid demonstrations. It was then that fellow activists informed him that Barack would be a better name for such an activist than “Barry.” In many ways Mandela’s cause started Obama on his path to the White House.

In the meantime the UK also has a right wing government that is punishing students and the poor on behalf of the rich. And the Likud Foreign Minister in Israel, Avigdor Lieberman, wants to take away the citizenship of Palestinian-Israelis (20% of the population) just as the Afrikaners took citizenship away from blacks and pushed them into Bantustans. Mandela said, ““We know too well that our freedom is incomplete without the freedom of the Palestinians.”

The world will celebrate Nelson Mandela. But for most of those global leaders, it is only lip service. With the partial exception of President Obama, they don’t share his actual ideals and wouldn’t approve of him when he was at his most active, in the early 1960s, trying to figure out how to sabotage the Afrikaner establishment. (I say partial in Obama’s case because obviously he admires the struggle against Apartheid, but on economic issues he is an Eisenhower Republican and Mandela wouldn’t approve). In the 1990s on his release from prison Mandela did stand out for his belief in peace and reconciliation. But that was only because the Afrikaners had lost and he could afford to be magnanimous in victory. He was not a pacifist. He did not believe in taking lives as part of his struggle, but he was willing to resort to violence. He was not a capitalist. He wanted uplift for the workers. He could not overlook racism the way Reagan, Thatcher and Shamir did.

South Africa itself, for all its economic and social dynamism, has also not fully attained Mandela’s ideals. Its poor are becoming worse off. Labor relations are roiled. And the ANC leadership is in disarray.

Mandela is not a birthday cake to be celebrated. The funeral with its hypocritical heads of state won’t honor him. He is a pioneer to be emulated. We honor him by standing up for justice even in the face of enormous opposition from the rich and powerful, by taking risks for high ideals. We won’t meet his standards. But if all of us tried, we’d make the world better. As he did.

The BBC “Story of Nelson Mandela”