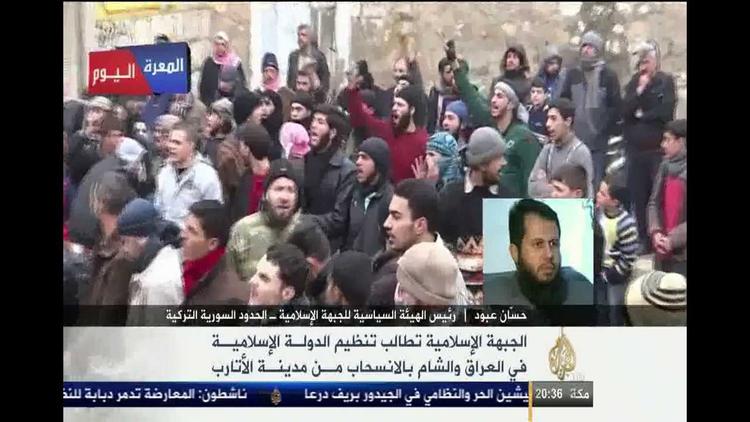 (By Joshua Landis with A.J.N.)

A major confrontation has broken out between the Islamic State in Iraq and Syria (ISIS) and Syria’s other rebel militias. It is being led by two newly organized coalitions, called Jaysh al Mujahidiin and the Front of Syrian Revolutionaries. But many other militias have also declared war on ISIS, insisting that it must abandon its attempt to establish a state and that its fighters must either integrate into Syria’s other militias or quit the country altogether. Fighting between Free Syria Army militias and ISIS has been widespread in the countryside of Aleppo and Idlib.

Clashes & protests that have taken place against ISIS by January 3, 2014

The reasons given for the current war on ISIS are numerous as are the reactions of different segments of Syrian society.

The Syrian opposition Coalition claims that ISIS is a regime inspired organization, designed to undermine the principles of the revolution and pervert the meaning of Islam. Chants of “Assad and D`ASH are one” have been repeated at many recent demonstrations against ISIS. (DA`ASH is the acronym in Arabic for ISIS or Dawla al-Islamiyya fi-l `Iraq wa Sham). The Coalition told AP that:

The Syrian National Coalition believes that ISIS is closely linked to the terrorist regime and serves the interests of the clique of President Bashar Al-Assad…. The murder of Syrians by this group leaves no doubt about the intentions behind their creation, their objectives, and the agendas they service, which is confirmed by the nature of their terrorist actions that are hostile to the Syrian revolution.

Hassan Aboud of the Islamic Front and head of its political bureau blamed ISIS for bringing this war on itself. Hassan Aboud explained in an interview with aljazerra:

All this fighting [between rebel forces] will only weaken the revolution and help the regime. We, in the Islamic Front, did not take the decision to fight ISIS, but whoever did it had his reasons because of the way ISIS treats other groups. ISIS denies reality, refusing to recognize that it is simply another group. It refuses to go to independent courts; it attacked many other groups, stole their weapons, occupied their headquarters, and arbitrarily apprehended numerous activists, journalists and rebels. It has been torturing its prisoners. These transgressions accumulated, and people got fed up with ISIS. Some of those people have attacked ISIS’s positions, but ISIS was first to attack in other places, bringing this on itself.

Regime supporters are naturally overjoyed at seeing their opponents fighting among themselves, underlined by this cartoon.

Regime soldier telephones for assistance.
He then replies to interlocutor: “No, not ammo, send metteh and sunflower seeds. We are watching the Free Syrian Army and Da`ash.”

A long series of ISIS attacks on competing rebel militias, preceded this war, but for the Islamic Front and Hassan Aboud in particular, the spark was the kidnapping and killing of Dr. Hussein al-Suleiman, a physician who was also a commander in the Ahrar al-Sham militia. Dr. Hussein was put in charge of the Bab al-Hawa border-crossing after Ahrar al-Sham troops, fighting under the name of the Islamic Front, took control of it in December 2013. Photos of his mutilated body, showing that an ear had been cut off, teeth knocked out, along with the top of his head shot off, went viral on twitter, provoking widespread horror and outrage.

ISIS had been trying to take control of the supply lines from Turkey to the rebel groups in Aleppo and the surrounding towns by capturing the towns between the Bab al-Hawa crossing and Aleppo. This effort came to a crescendo with the ISIS raid on the Supreme Millitary Command’s Head Quarters in Bab al-Hawa earlier this month, when Chief of Staff Suleiman Idriss was expelled from Syria. Islamic Front militias swept to the rescue, when they were called by Idriss to help. According to Free Syria Army officers who were at the headquarters, Ahrar al-Sham soldiers took the SMC HQ at Bab al-Hawa by force in the name of saving it from ISIS, plundering FSA weapons, cloths and personal belonging. The showdown at Bab al-Hawa, the strategic boarder-town with Turkey, set all parties on a collision course that exploded in the last couple of days, following the ISIS killing of I.F.’s Dr Hussein and Bab al-Hawa commander.

Hassan Aboud has been trying to moderate and limit the confrontation between rebel groups. During his al-Jazeera interview, he added

We tell our brothers on the inside that this is not a fight against Islamists because Islamisms are on both sides. We ask that our muhajiriin brothers be treated well and not harmed. We tell our brethren the muhajiriin and ISIS to fear God when dealing with the people you came to liberate. Aren’t they the ones that liberated Maskana and Atarib and the western countryside of Aleppo? Don’t live in the illusion that all people against you are sahwa (reference to the Iraqi “Awakening” movement that was armed by the US government. Sunni tribes that defeated al-Qaida in Iraq.)
….The infighting serves no one; oppressing fellow rebels serves no one save the regime, thus we call on the groups on the ground to keep their unity and not to get bogged down in internal infighting especially before Geneva II. Because we see that the Syrian situation is being portrayed as a civil war that has no solution but a political one. This is a portrayal that serves the regime and takes us back to the situation that existed before the Syrian revolution broke out, but with a destroyed infrastructure and a population made homeless……
You are fighting the regime. So is ISIS. How will in-fighting effect the future of groups fighting the regime? We would like these [ISIS] brothers to join their brethren in the Syrian revolution. We see them as nothing but another group. They see themselves as a State. They need to drop this illusion that they have come to believe as an established fact. It causes them to treat allies as opponents. Nusra doesn’t differ in ideology and authority from ISIS, but they have been able to work hand in glove with the other militias because they have followed the rule that no objective has a higher priority then pushing back the enemy. So we call on ISIS to follow Nusra’s lead. In this way, we will save the blood of our fighters and bullets of our guns for the front lines.

Aboud makes clear that he views ISIS as a potential partner. He is careful to pave the way for its return to the fold. He explains that ISIS’s goal of an Islamic state is not substantially different than that of the Islamic Front or the many other militias fighting in Syria. Where it does differ is that it sees itself as the unique heir to the state and has begun setting up mini-states wherever it rules, pushing aside fellow militias and refusing to submit to the common Sharia court system that the Islamic Front militias and Nusra have constructed and administer together. He points out how Nusra has agreed to cooperate and defer questions of permanent state-building and ultimate governance until after Assad is defeated. This is a way of putting aside what may be fairly substantial ideological differences between militias despite their common goal of an Islamic state and perhaps more importantly, it defers any contest over ultimate executive power. The Emir of ISIS, Abu Bakr al Baghdadi, hopes to assert himself as the Caliph and force the others to give him bay`a or allegiance. He has also imposed rather draconian sharia punishments and forbidden smoking, music, and other simple pleasures that many find intolerable. This underlines the great problems that remain for the militias in determining what form and style an eventual Islamic state will take, not to mention who among the militia leaders will ultimately rule.
Islamic Front leaders have been very skilful about finessing questions on governance. The standard answer they give to those who ask what kind of government they intend is that they will call on an assembly of Ulema to decide on the correct form of Islamic government when the time comes.

Timeline of the events of the month.

For more, including a translation of an important Arabic newspaper article on the subject, see Syria Comment