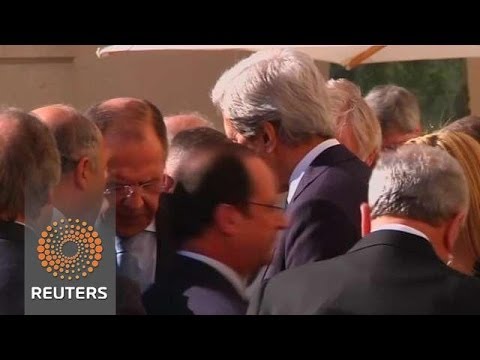 Cold War times are back in Europe. Russian troops are standing in Crimea. The peninsula in southern Ukraine is known for its sparkling wine and the conference of Yalta in 1945, where Roosevelt, Churchill and Stalin agreed on the division of Germany and the post-war reorganization of Europe.

Russian President Putin, with his moves in the Ukraine, shows again what a resurgent Russia looks like. In 2014, the country is almost back to its old Soviet form: economically strong but vulnerable on the inside, militarily powerful on the outside. In the 20 years of Russia’s weakness, the Baltic states had become members of NATO and many former iron curtain states had joined the European Union. Losing Ukraine to the West was a no go for Putin. He had to act. The buck stops here.

While the Cold War remained mostly cold in Europe, it always was hotter elsewhere. The Middle East was no exception. In 1953, a CIA-assisted coup deposed Iranian prime minister Mosadegh, perceived of being too close to communism, and replaced him with US-friendly Mohammed Reza Pahlavi. He would later become the Shah.

In 1956, the Suez crisis saw a Warsaw Pact backed Egypt fight the UK, France and Israel over the control of the Suez Canal. In 1979, the Soviet Union intervened in Afghanistan to help a communist government pressured by Mujahedins and monarchists and to secure the USSR’s southern flank.

Looking back with some nostalgia, the Cold War seems to be the good old times. The world was bipolar, with the United States (often acting in tandem with Western Europe) and the Soviet Union making sure that no conflict would get too much out of hand. A mutual assured destruction was the guarantee that no nuclear bombs were launched during this period. However, for the people of the Middle East, the situation was less rosy.

The Cold War in the Middle East meant that autocrats and dictators were allowed to govern as they pleased. These rulers were encouraged and supported by their sponsors in Washington or Moscow. Hafez al-Assad was the Soviet’s man no matter how hard he pushed his agenda in Syria. The Shah of Iran could do no wrong as long as he kept hammer and sickle out of his country. Egypt finally shifted its alliance from the USSR during the early days of the Cold War to being a United States follower under Sadat. Ultimately this led to a peace agreement with Israel.

“With Russia in the Crimea and possibly in Kiev, will the United States dare to teach Assad a lesson

Whoever the godfathers of their rulers were, for the people of the Middle East it meant that liberal democracies Western style never had a chance to see the light of an election day. Democracy by definition implies instability and insecurity. During Cold War times, the superpowers were not ready to accept this risk. The Middle East was too precious a region for the Americans to have it voted away to the Soviets.

When the Berlin Wall fell and the Soviet Union crumbled, the Cold War came to an end. The Unites States finally had free reins. For Middle Easterners, their fate didn’t turn into luck. An unipolar world was no better as the people of Iraq found out in 2003. Unchecked by an equivalent Soviet Union, the United States’ war machine invaded Iraq to topple Saddam – no tears for him – and to achieve a strategic position in the region. 100,000s of Iraqis were killed in the process.

A window of opportunity opened up three years ago for Middle Eastern people. In hindsight, the Arab Spring was the consequence of the near end of the American hegemony and Russia not yet ready to start a new Cold War cycle. Taking advantage of this historic constellation, people in Egypt, Syria and Yemen demanded that the old guards, remnants of the Cold War, had to go. Their aspirations were high, but their hopes were soon cut short.

This is 2014 and we are back to a Cold War of a new sort. The United States’ military budget is about to be reduced considerably and thanks to Putin’s determined actions, Russia has found a second breath. How will this new equilibrium play out in the conflict zones of the Middle East? Here is a prediction.

In Egypt, General Sisi will be happy to learn that now two weapons suppliers are at his disposal to hedge his grip. Already Egypt has signed new defense deals with Moscow. The Egyptian people can just forget to get rid of the Mubarak era anytime soon. Maybe this is for the better. The alternative that was tried was the Muslim Brotherhood and they turned out to be a bad investment.

In Syria, Bashar al-Assad, Russia’s pivot in the Arab world, and his jihadist opponents, at least indirectly supported by the United States, may have gotten an extended life line with this new Cold War. However Syria as a whole – the people, the country – will be wasted completely as a result of this protracted war.

Al-Assad almost got bombed last year if not for a last minute chemical weapons deal brokered by Russia. That the regime of Bashar al-Assad will be hit by American or NATO bombs at one point in time is a near given and has been announced by this writer already last September on Twitter. But then again: with Russia in the Crimea and possibly in Kiev, will the United States dare to teach Assad a lesson?

This leaves us with Iran who is set be the winner of this round of Cold War. Iran is the much coveted prize in any future gamble in the Middle East. With its well-established institutions, Iran is a rock compared to the sand dunes the rest of the Middle Eastern countries are built on.

In a not too distant future, Putin may cut off Europe from Russia’s oil and gas supplies to pressure Merkel et al. into some kind of a bargain. But luckily a nuclear deal with Iran had been signed in a hurry and thanks to Europe’s new best friends in Tehran, the German chancellor will not suffer from a cold winter. And for everything else there are nuclear power plants as the Mullahs have argued for a long time.

Of course the Iranians will be more inclined to help Europe out when they promise to be nice with their friend Assad. If not, Iran always has the Russians to partner with – and they have a proven record of having a soft spot for the al-Assads.