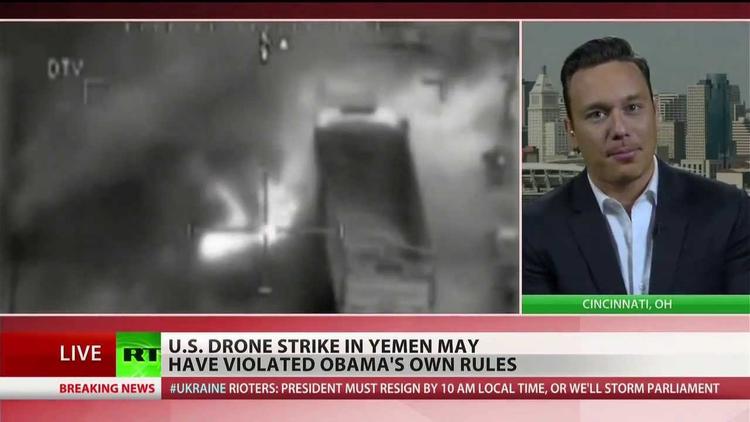 As the United States steps up covert drone strikes on Yemen, with three suspected U.S. drone attacks killing at least four people in Yemen early this week, campaigners on the ground say the accumulated years spent living under constant threat of death from above are sowing tragedy, "psychological torture," and resistance across the country.

"Entire communities are being killed off and families are being torn apart," said Rooj Alwazir, an anti-drone organizer based in Yemen, in an interview with Common Dreams. "Many people are living in constant fear because they could be next, creating widespread and long-term psychological torture. Many young boys are afraid to gather and children stop going to school and families stop gathering."

"As a result," she added, "the drone program fails to achieve their purpose. Instead of keeping the U.S. and Yemenis safe they end up breeding animosity and tearing apart the social fabric of some of the poorest and marginalized communities in the world."

While the U.S. government conceals information about its drone campaign from the public, data from The Bureau of Investigative Journalism shows that drone strikes in Yemen have overall increased since the first recorded attack in 2002, with a drastic spike in 2012. This trend was confirmed by Robert Naiman, Policy Director for Just Foreign Policy, who told Common Dreams, "Recently, drone strikes have been tapering off in Pakistan and increasing in Yemen. It has gone up and down, but the trend, since the drone strikes started, has increased."

Entire communities are being killed off and families are being torn apart. Many people are living in constant fear because they could be next, creating widespread and long-term psychological torture. —Rooj Alwazir, anti-drone organizer

This is partially due to the strong backing of the Yemeni government for attacks allegedly targeting al Qaeda in the Arabian Peninsula (AQAP), which is believed to be active in Yemen. Yet, Alwazir says, "Yemenis, like Americans, do not want al Qaeda; they too terrorize their communities. But fighting terrorism with terrorism will only further hurt Yemeni civilians living in between al Qaeda and the state and it will backfire on the U.S. and Yemeni government. Drones terrorize and kill; they are in no way a solution to fighting terrorism."

According to Naiman, "The central government is making a deal with the Americans, giving permission to carry out drone strikes in certain areas. People in these areas don't have any say in the government signing off on this."

The regions most targeted by drones strikes are often those in dire need of public services. "Areas where drones have struck are usually areas that are severely impoverished," said Alwazir. "No schools, no hospitals, no roads. A Hellfire missile costs $60,000 and four are usually launched at the same time. Instead of spending it on killing, the money should be spent fixing roads and building schools."

While the Obama administration has refused to publicly identify the people killed in drone attacks, it has repeated the unverified claim that civilian deaths have been minimal. A "modest" initiative in the U.S. Senate that would have forced the U.S. government to publicly report those killed by U.S. drone strikes overseas and identify the civilians and alleged combatants killed failed last November.

According to Alwazir, the official government breakdown between "civilian" and "militant" is suspect. "Those killed are forced into a militant/civilian binary that only reinforces a common misunderstanding of 'militant' to begin with. And because to the U.S. government, a male 16 years and older is a potential suspect, it allows the U.S. and Yemeni government to continue launching missiles and get away with 'mistakes' a little bit easier," she said. "Unfortunately, both governments refuse to acknowledge their mistakes and apologize, further alienating, angering and aggravating Yemeni society."

A December 2013 U.S. drone strike on a recent wedding procession in Yemen near the city of Rad’a left 12 people dead and at least 15 wounded. While U.S. and Yemeni officials were quick to claim that the attack killed "militants," eye-witnesses and relatives of the deceased contradicted these claims. A 28-page report by Human Rights Watch traces chilling accounts of slaughter of civilians, for which victims and their survivors have still received no answers from the U.S. government.

Opponents of U.S.-led military aggression say that the heavy toll from U.S. drone strikes is only going to grow as this form of warfare expands. "Drone warfare is on the rise. Governments have found a way of not putting human troops in the line of fire and instead of sending remote controlled robots to kill people," said Jerry Goralnick, member of the War Resisters League and organizer of protsts against defense contractor L3 Communications, which is involved in U.S. drone production. "This is going to happen more and more, and direct action to stop it is really important."

According to Alwazir, civilian casualties are sparking public opposition that could force change at the policy level. "The National Dialogue, the body appointed to create a new constitution, has also recommended a law that would make a criminal offense of extra-judicial killing," said Alwazir. "The recommendation was issue by the National Issues and Transitional Justice Working Group, which would outlaw the US drone strikes that have killed and injured hundreds of people in Yemen, including the brutal wedding attack that killed 12 and injured 15."

And then there are the everyday acts of resistance that "come in all forms," according to Alwazir. "You have the protests that happen in front of the U.S. Embassy and then you have people like Mohammed al Qawli who lost his brother to a drone strike in January 2013 and took the lead in street outreach and educating everyday Yemenis on the impact of drones. Qawli started a "Drone victims support network" and visits families impacted and empowers them to speak up. Abeer Omar bakes and visits her neighbors as a way to break barriers of fear. Her baking is her resistance."

RT “Obama violated his own rules with Yemen drone strike”