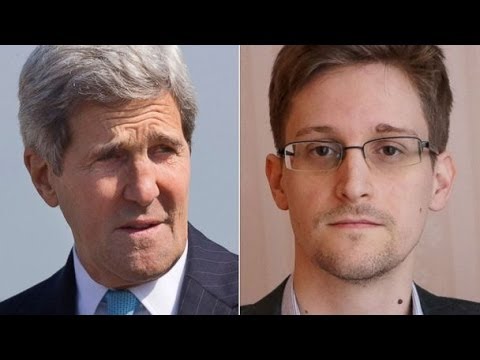 U.S. Secretary of State John Kerry is facing widespread criticism for his comment that NSA whistleblower Edward Snowden—increasingly seen by the American public as a heroic figure for exposing government surveillance—should "man up" by returning home to face criminal charges.

U.S. Secretary of State John Kerry’s attempt to bully Edward Snowden with “faux-machismo rantings” appear to have backfired. (File) “This is a man who has betrayed his country,” Kerry told CBS News on Wednesday, just hours before the airing of highly anticipated interview between Snowden and NBC News' Brian Williams. “He should man up and come back to the US.”

Seen widely as an attempt by Kerry and the Obama administration to turn public opinion against the 30-year-old former intelligence contractor, for many it had the opposite effect: making the Secretary look both petty and misogynistic—not to mention "wrong"—by characterizing Snowden as "less than a man" for his actions.

Responding to Kerry's remarks on his website, Peter Van Buren, a former government employee and whistleblower himself said that the Secretary of State—who at this point sounds "more like Grandpa Simpson than America’s Senior Diplomat"—has apparently been "relegated within the Obama administration to the role of mumbling bully-boy statements, faux-machismo rantings whose intended audience and purpose are very, very unclear."

On Twitter, some turned the tables on Kerry's comments, by saying that to the extent the term is cultural code for "courage or bravery" it is the Secretary of State and the government he represents who should "man up" by admitting their short-sighted and mistaken approach to the Snowden affair and foreign policy and surveillance issues more broadly:

Actually, it's Sec. Kerry who needs to "man up" and admit that the Espionage Act is unconstitutional: http://t.co/vUnlq2Fovs #Snowden

John Kerry's comments on hero Edward Snowden are pathetic.Mr.Kerry why don't u "man up" and admit ur complicit in police state spying on us?

'Man up and come home' says Kerry to Snowden, presumably home is where 'men' like Kerry blow men, women n children to pieces via a joystick.

Others, however, put their entire focus on the conceit of Kerry's use of the phrase "man up" itself, widely described as both misogynistic, petty and "obnoxious."

The US State Dept deplores the treatment of women and girls; Kerry recommends that Snowden "man up." Fighting misogyny around the globe.

@ksdknews #johnkerry said Snowden should man up Does Kerry think women can't do the right thing? man-up is a hating comment??

Does John Kerry believe that a woman in Snowden's situation wouldn't have the same obligation to return home? http://t.co/6RLcW0ttrX

Writing for VICE, journalist and commentator Natasha Lennard characterized Kerry's comments as equal parts "moronic, offensive, and dangerous." She argued that Kerry's use of "man up" was a "misogyny-soaked problem" large enough for its own column but also took issue with other troubling undertones of Kerry's remarks:

The underlying logic of his comment conflates "America" with the "American justice system." But if US justice is an avatar for America, it stands not as a representative but rather as an opponent to millions of Americans. And herein, I believe, lies a fundamental difference between those who see Snowden as hero and those who see him as an enemy.

It's a question of allegiance. The sort of care Snowden has exhibited towards the US is a care for its citizens: their rights, freedoms and access to knowledge about how their lives are watched and policed. His, one might say, is an allegiance to that old myth, "America the free." Kerry, meanwhile, shows his colors in aligning uncritically with "America the state."

Unlike Snowden, I'm no patriot. But the secretary of state's assumption that one cannot be patriotic while challenging the misdeeds of state institutions misreads care for a country's purported ideals with its institutional representatives. It's a dangerous logic that opens the door to any number of abuses and oppressions.

Journalist Glenn Greenwald, with a comment that was re-tweeted more than 250 times overnight, responded to Kerry's 'man up' comment on Wednesday by focusing on its practical implications:

Kerry's macho bravado ("man up") is not just obnoxious but deceitful, since he'd be barred from arguing justification http://t.co/SCKTNgJO7e

And that's a key point, according to Van Buren, who explains:

Trials under the Espionage Act, which the U.S. says is how Snowden will be charged, quite specifically prohibit discussion of anything except proof or rebuttal that the accused did leak classified information. A jury is not allowed to rule on, or even hear about, motive and intent.

John Kiriakou, the former CIA officer who was the first to go on-the-record with the media about waterboarding, pled guilty in his Espionage Act case last year partially because a judge ruled he couldn’t tell the jury about his lack of intent to harm the United States. In the case of State Department official Stephen Kim, the judge ruled the prosecution “need not show that the information he allegedly leaked could damage U.S. national security or benefit a foreign power, even potentially.” In the Espionage Act case against NSA whistleblower Thomas Drake, the government filed motions to make sure the words “whistleblowing” or “overclassification” would never be uttered at trial. In Chelsea Manning’s trial, Manning’s defense wanted to argue she intended to inform the public, that the military was afflicted with a deep and unnecessary addiction to overclassification, and that the government’s own internal assessments showed she caused no real damage to U.S. interests. All this information was ruled inadmissible.

A SuperMax cell is not a very good bully pulpit.

Kerry is either lying, or his hopelessly ignorant.

In his interview with Brian Williams, asked why he won't just return to the U.S. to "face the music," Snowden himself called it a valid concern people have, but echoed Van Buren's argument with this response:

It's a fair question… But it's also uninformed, because what has been lain against me are not normal charges. They're extraordinary charges. We've seen more charges under the Espionage Act in the last administration than we have in all other administrations in — in Americans history. The Espionage Act provides — anyone accused of it of no chance to make a public defense. You can't argue to the jury that what you did was in the public interest. You're not even allowed to make that case. They can't hear it. You are not allowed to argue — based on all the evidence in your favor because that evidence may be classified, even if it's exculpatory. And so when people say — "Why don't you go home and face the music?" I say you have to understand that the music is not an open court and a fair trial.

And Snowden's lawyer, Ben Wizner at the ACLU, told the Guardian that “the laws under which Snowden is charged don’t distinguish between sharing information with the press in the public interest, and selling secrets to a foreign enemy.”

He continued: “The laws would not provide him any opportunity to say that the information never should have been withheld from the public in the first place. And the fact that the disclosures have led to the highest journalism rewards, have led to historic reforms in the US and around the world – all of that would be irrelevant in a prosecution under the espionage laws in the United States.”

For his part, Van Buren offered this as an idea for a fair compromise on holding people accountable for their actions:

When the Department of Justice agrees to charge James Clapper, national director of intelligence, for lying under oath to Congress about the surveillance of Americans, Snowden will know American justice is fair and equally applied, and come home for a trial. Better yet Kerry, promise that both trials will be televised live with no sealed documents or secret sessions. Deal?

Likely no one—least of all Edward Snowden—is holding their breath for Kerry to sign that piece of paper, however.