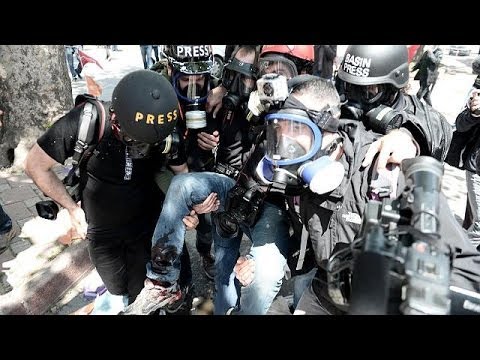 With a reported 39,000 police officers and 50 water cannon vehicles, plentiful supplies of teargas, and a complete shutdown of the public transport system in the city, the Turkish government succeeded once again in banning the celebration of May 1 in Istanbul’s Taksim Square.

With streets leading to the square blocked, most people couldn’t get there. Police dispersed members of the trade union federation DİSK gathered peacefully near their union headquarters with water cannons and teargas. As one cartoon circulating on Twitter pointed out, May 1 had become the policeman’s holiday, not the workers’.

Governments in Turkey have tried to prevent May 1 Taksim protests on and off for years. In the past they felt the need to supply excuses. A favorite was unspecified intelligence reports pointing to “provocation by illegal groups.” For the past two years the prime minister and other ministers have simply made it known that they don’t want demonstrations in Taksim or any other city center location and are ready to provide spaces they judge appropriate.

What they refuse to acknowledge is that the very point of a demonstration is to disrupt the flow of daily life, to draw attention to issues, and to champion rights in public. Being relegated to a place where you are out of sight and not bothering anyone defeats that purpose.

Another important motivation for demonstrators is to hold protests in places of symbolic and historical importance. Taksim Square occupies such a place for Turkey’s labor movement. In the huge May 1 gathering in 1977, unidentified gunmen killed at least five demonstrators, and at least 30 others died in the stampede to flee.

The result of this year’s heavy-handed ban and dispersal of non-violent protesters has once again been running street battles with the police. Turkish media websites and Twitter show images of children overcome by teargas, of a man shot at close range with a teargas canister, and of a woman holding up her citizen’s ID in protest as she is sprayed by water cannon. The police have already conducted mass arrests. By day’s end many people will be injured, including police officers.

Those involved in the street battles are not greying middle-aged trade unionists but mostly poor, angry inner-city youth. Absolute bans and heavy policing have helped perpetuate this subaltern youth culture inspired by radical leftist groups: they are up for a fight.

In 2011-12, when the government allowed May 1 assemblies in Taksim, the atmosphere was peaceful and celebratory, and arrests were minimal. The officials should seriously ask themselves who is really responsible for bringing a city of 14 million people to a halt and for the scenes of prolonged street fighting we have seen once again.