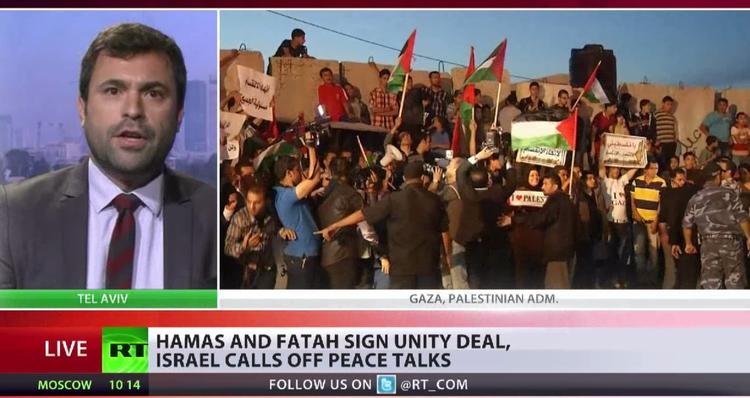 Aside from the occasional cross-border violence between Gaza and Israel, Hamas, which governs the coastal strip, has received little attention in the press over the last few years. Because of their recent agreement with Palestinian president Mahmoud Abbas’s government in the West Bank, the subject is receiving increased treatment. The story, however, has more to do with the core features of the Palestine-Israel conflict and little to do with Hamas.

On April 23, Fatah, the leading faction in the PLO, and Hamas announced reconciliation along with plans to form a unity government and elections to follow. Upon news of the agreement, Israel immediately became indignant, canceling future talks on account of its refusal to negotiate with Hamas or those allied with them. In addition, Israeli prime minister Benjamin Netanyahu presented Abbas with an either/or option of peace with Hamas or peace with Israel, insisting “You can have one but not the other.”

While less apoplectic, the US State Department intoned its disappointment, while members of Congress – closer to Israel’s thinking – began looking to curtail aid to the Palestinian Authority as a form of rebuke.

The negative responses, on the surface, are due to projected US-Israeli revulsion toward Hamas. Beneath the surface, Washington and Tel Aviv simply expect the Palestinians to remain compliant under occupation and deferential to authority.

Hamas, or the Islamic Resistance Movement, emerged in Gaza in 1988, an offshoot of the Muslim Brotherhood in Egypt. Its original objective was to liberate all of former Palestine through violent jihadist means and, in its place, produce an Islamic state. The group was also involved in building schools, running medical facilities, and doing social work, and for a time intrigued the leadership in Israel, which saw it as a viable PLO replacement.

Over three consecutive years – 2005, 2006, 2007 – Hamas would come to be a key player in the overall conflict. In 2005, Israel “disengaged” from Gaza, shifting the occupation to the outside of the territory. In 2006, Hamas won a large percentage of seats in the parliamentary elections that January. The following summer, Israel commenced Operation Summer Rains, subjecting Gaza to physical devastation while killing hundreds. In 2007, tensions in Gaza between Fatah and Hamas came to a head. With firefights breaking out, the United States began arming and financing Fatah in hopes of the West Bank government overpowering Hamas. In what can be viewed as a preemptive coup, Hamas defeated Fatah and took control of the strip. Ever since, Gaza has been subjected to a blockade and turned into a virtual penal colony.

Immediately after Hamas assumed control of Gaza, the United States, the EU, and the UN imposed three oft-repeated international demands on Hamas: renunciation of violence, recognition of Israel, and acceptance of previous agreements. Though rarely reported, Hamas has adhered to ceasefires, voiced willingness to work toward a two-state solution based on the 1967 boundaries, and has stated that it would accept prior agreements deemed in Palestine’s best interest, along with agreements approved by referendum or an elected government. Despite its charter’s aggressive language and the organization’s involvement in terrorism, Hamas has softened its positions and evolved into more of a political organization.

Complete or partial satisfaction by Hamas of the three international criteria, however, has been ignored by Washington. Also paid no heed, it is only fair to note, is Israel’s persistent breach of the three demands: Tel Aviv has not renounced violence, has rejected Palestine’s existence for 47 years, and is every bit as guilty of dismissing previous agreements.

At the time the blockade started, various Israeli intelligence and military officials began expressing concern over their country’s policy toward Hamas. Major General (ret.) Shlomo Gazit, a former military intelligence chief, dismissed the three demands as “ridiculous, or an excuse not to negotiate.” Ephraim Halevy, a former Mossad chief and adviser to former prime ministers Yitzhak Shamir and Ariel Sharon, acknowledged diplomacy with Hamas “may not work, but aren’t we strong enough to be able to try it?” Halevy added: “They’re not very pleasant people, but they are very, very credible.” [For quotes, see Forward, Feb. 2007.]

For that matter, former president Jimmy Carter met with Hamas officials around the same time, made diplomatic headway, and reported the results in a New York Times op-ed (Apr. 28, 2008).

Since 2007, there has been a split system in Palestine: the Palestinian Authority in the West Bank and Hamas in Gaza. By voting the latter into government in free and fair elections, the people of Gaza have been punished for it. This fact gets to the heart of the matter. What arouses disgust in Washington and Tel Aviv is when people who are under a form of imperial control attempt to steer their own path. This response is not unique to the United States and Israel, of course; in general and throughout world history, power reflexively becomes irate when those below act with autonomy, threatening the stability of the prevailing system.

Like any state in a position of hegemony, Israel knows that there will be certain consequences. If you humiliate or make desperate a large number of people, a few will let you know about it in a violent way. Hamas’s very existence is an expression of Palestinian resentment and frustration. Were there no occupation, there would be no Hamas. Were Gaza not put through isolation, economic ruin, water shortages, fuel shortages, fishing restrictions, blackouts, sonic booms, bombings, and targeted killings from the sky claiming bystanders, it is unlikely homemade rockets would be fired into southern Israel. The cause and effect relationship is clear and evidently acceptable to the prime minister’s office.

The language used to describe Hamas by Israel is not new. The policy platform of former Israeli prime minister Menachem Begin referred to the PLO in 1977 as an “organization of assassins” seeking to “liquidate the State of Israel.” (Also common throughout history is for power to describe the people its grinding down as posing an existential threat.) Ever since the Palestinian Authority was created after the Oslo Accords, its presidents have essentially functioned as occupation governors. With Hamas in the equation, the occupied are now divided. Moreover, Israel has a built-in excuse to mete out to Gaza reminders of where they stand – to say nothing of the opportunities to test new military equipment and technology.

The Fatah-Hamas reconciliation agreement is part of the ongoing ballet that is the peace process. Whether the reconciliation is genuine or whether it will last, time will tell. What is new here is the White House’s early and sustained efforts at negotiations. Secretary John Kerry’s numerous trips to the region and continued diplomacy signal a possible seriousness in the Obama administration.

Naturally, the White House knows (as an author) how the game is played and that Israel will be the real source of diplomatic resistance. And when the White House wants something, it is not shy about jerking Israel’s leash – a precedented reality seldom acknowledged. On more than one occasion, Kerry has apparently needed to get Netanyahu’s attention: (1) mentioning to waiting US embassy officials in Algiers that “I had a phone call [with Netanyahu], and it was one of those calls where you can’t get the other person to realize the call is over; (2) a reprimand over settlements in the form of Kerry’s famous “poof” comment, blaming the Israelis for undercutting negotiations; and (3) Kerry’s recent use of the word “apartheid” in the context of Israel’s future.

As for the Fatah-Hamas agreement, the White House seems calm on the matter. Obama’s Middle East adviser Philip Gordon recently indicated the White House remains unruffled. Aaron David Miller, a longtime former State Department adviser and negotiator, told Reuters (Apr. 27), “This will probably slow things down, but it will resume at some point … There is no need for the United States to walk away from this, and it would be stupid, frankly.”

It should also be kept in mind that, if Obama and company are indeed serious about possibly resolving the Palestine-Israel conflict, they will very likely stretch the current chapter to the end of the president’s term in office. That being the case, there is plenty more theater in store.

Gregory Harms is an independent scholar focusing on the Middle East