(By Shalom Goldman via IslamiCommentary)

After weeks-long elections in India, the Hindu nationalist BJP party, with Narendra Modi as prime-minister elect, has emerged as the overwhelming victor in a hotly contested campaign. The election results were both an affirmation of the BJP’s policies and ideologies and a resounding defeat for the Congress Party, which has led India’s government for most of the nation’s modern history, and which is now perceived by the electorate as riddled with corruption and inefficiency.

Out of the 543 seats in the Indian parliament, the BJP won 282, but the Congress Party won only 44 —the lowest number ever for a party that had grown accustomed to power over many decades.

What might this seismic shift in Indian politics portend for Israel, a small state thousands of miles away whose population of seven million is one hundred and fiftieth of the size of India’s 1.2 billion ?

One of the first heads of state to congratulate Modi after his triumph was Israeli Prime Minister Benjamin Netanyahu. And in a statement about his call to Modi, Netanyahu noted that “the Prime Minister-designate has expressed his desire to deepen and develop ties with Israel.”

The ties that Netanyahu was referring to — primarily economic and military (linked areas, of course) — have been developing since 1992, when India and Israel established full diplomatic relations. But the real push for making the two countries primary partners came during the BJP years of 1998 to 2004.

Today, a decade on, Israel arms sales to India amount to close to ten billion dollars. In fact, India is now Israel’s largest defense market ; over half of its arm sales are to the Indian military. In addition to the arms deals, there is a 5 billion dollar bilateral trade relationship between the two countries that includes solar power, hi-tech research and agricultural development — areas in which Israel is a technical and economic force.

That said, Congress party leaders who succeeded the BJP government in 2004 were by no means averse to deepening ties with Israel. Just six months ago, the Indian government, under Congress control, concluded a ten billion dollar deal with the Israeli company Tower Electronics to build two semiconductor plants in India.

In addition to the military-industrial aspects of the budding Netanyahu-Modi bromance, there are the ideological factors that bind them together. For decades both leaders have been pushing an ethnic nationalist agenda in their respective countries, though India and Israel are democracies in which the Muslim minority (15% in India, and 17% in Israel) has the right to vote. And the liberal secular forces within both countries have attempted (though imperfectly) to stop this progression to an ethnic nationalist state. But those attempts are failing.

While in previous elections India’s 180 million Muslims always had to be taken into account, the Muslim electorate appears not to have mattered in the BJP’s latest victory. Exit polls showed that only 1 in 10 Muslim voters nationwide picked the BJP.

Muslim voters were wooed by the Congress Party and by parties on the Left, including the Communists, but the BJP basically by-passed them. The BJP put forward 482 candidates for parliamentary seats, only seven of which were Muslim, and none of those seven secured a seat in parliament. And the party won 71 of 80 seats in Uttar Pradesh, India’s most populous state that has more Muslims than any other.

The present moment is not the BJP’s first taste of political power. A coalition headed by the BJP ruled India from 1998 to 2004. But at that point the party had not achieved the great popularity it now has, and its ability to change India’s neo-liberal social and economic policies was quite limited.

For the past twelve years Modi was the Chief Minister of the state of Gujarat. In Gujarat he is perceived as being the architect of that state’s great economic success. And to make the picture even more complex, many Muslims in Gujarat also benefitted from Modi’s economic policies. And it is that success that India’s large middle class would like to see replicated throughout the whole country.

But it was because of a conflict in Gujarat, rather than an economic boom, that Modi gained his popularity among Hindu nationalists (Hindus are 80% of the population) and his notoriety among Muslims and secular liberals. In 2002, soon after Modi became Chief Minister, Hindu-Muslim riots broke out. Muslims were the primary victims of the riots (of pillage, murder and terror) and Modi was blamed by many for favoring Hindus and not protecting Muslims during the hostilities. Even as some members of his government are now facing trial, Modi was exonerated of any wrongdoing by the Supreme Court of India and has repeatedly refused to accept any responsibility.

In 2005 the US government, wanting to distance itself from the BJP’s role in the Gujarat riots, even turned down Modi’s request for a visa to visit the US.

More recently, an open letter from Salman Rushdie and other prominent Indian intellectuals, published a few weeks before the elections, sought to remind observers in the West of Modi’s complicity in the Gujarat riots.

Though the letter did get some attention in the West it did not have any effect on the outcome of the Indian elections. The Indian electorate was focused on promises of economic development, and on affirmations of the nation’s Hindu 0character.

A few days after the BJP’s electoral triumph Modi made a pilgrimage to the Hindu holy city of Varanasi (Benares). On the banks of the sacred river he paid tribute to “mother Ganges.” And at a prayer service in a Varanasi temple Modi joined worshippers of the god Shiva.

In an emotional speech to parliament yesterday Modi urged his colleagues to dedicate themselves to serving their nation of all 1.25 billion Indians whose “hopes and aspirations are embedded in this temple of democracy.”

It remains to be seen how far this dedication extends to serving the country’s Muslim minority, and you can be sure Israel will be watching.

The Likud party in Israel, from which Netanyahu emerged, a party that successfully challenged the Labor Party hegemony of the first three decades of Israeli statehood, has long made the case that Israel needs to be more ‘Jewish.’ To the uninitiated this might seem like a strange case to make. Considering that Israel already has a majority Jewish population, this would seem to make such a campaign redundant at best.

But for Netanyahu’s ideological forerunners, including his father, Cornell University Professor Benzion Netanyahu, Labor Party ideology was tainted with Western liberalism and moral relativism. And it was hostile to traditional Jewish religious practice. Likud leaders, foremost among them Menachem Begin, countered this liberalism with a synthesis of religion and politics that radically changed the Israeli political and physical landscape. The West Bank Settler movement, which flourished under the Begin government (1977-83), grew out of that powerful synthesis between religion and politics.

It was Begin’s protege Ariel Sharon, great champion of the Settlement project in the 1970s and 80s and Prime Minister from 2001 to 2006 who saw the great potential of links to India and made a state visit there in 2003. The BJP, then in power, welcomed him enthusiastically. Leftist and Muslims were, of course, hostile to the visit and to the deepening of Indian ties to Israel. Sharon was perceived in the Muslim world as the devil incarnate, and was seen by Indian Leftists as the architect of an illegal occupation. Modi and other BJP leaders visited Israel during the early 2000s and were very warmly received.

In 2003, with the 9/11 attacks only two years in the background, both Sharon and his hosts invoked the scepter of “Islamic terrorism” as a force that both countries had to fight.

The Israeli Right and India’s Hindu right — in light of recent elections in both countries, now major forces in their respective countries — have much in common.

Soon after the BJP victory this past weekend, there were rumors in Delhi of a Modi trip to Tel Aviv. Denied a visa to the US and shunned during his Gujarat Chief Minister years by the Obama administration, Modi may be reluctant to visit the US. But just this week Obama extended an invitation, which the Prime Minister-designate will have to respond to.

Modi may be the first Indian head of state to visit Israel — where his brand of ethnic nationalism will find sympathetic ears.

Shalom Goldman is Professor of Religion and Middle Eastern Studies at Duke University, and core faculty of the Duke Islamic Studies Center. His most recent book is Zeal for Zion: Christians, Jews, and the Idea of the Promised Land (UNC Press, January, 2010). He is also a regular contributor to ISLAMiCommentary. The above post was written for “Sacred Matters,” a web magazine of “religious currents in culture” based at Emory University. 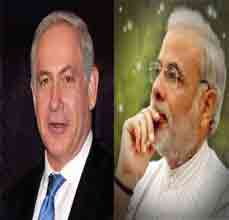