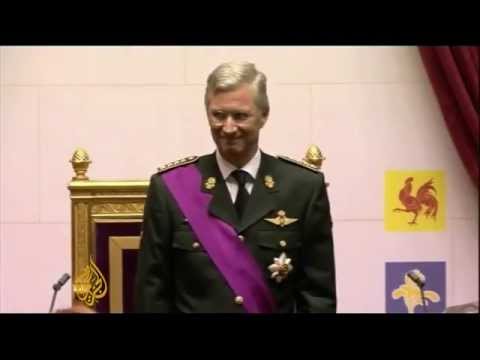 Binyamin Netanyahu is again beating the “Israel is a Jewish state” drum, and now wants to have it legislated into Israeli organic law.

“They want a Palestinian national homeland to be established here next to us, and that Israel be gradually turned into a bi-national Jewish-Arab state within our reduced borders…”

“You cannot say we want to break away from the Palestinians to prevent a bi-national state — something which has a certain logic — and at the same time give your blessing to a bi-national, Jewish-Arab state within Israel’s permanent borders…”

“Israel gives full equal rights to all of its citizens but it is the national homeland of just one people – the Jewish people.”

The point for Netanyahu of declaring Israel a “Jewish state” is therefore to prevent it from being described as a “bi-national” state, i.e. as being made up of both Jews and Palestinians (not to mention some 300,000 non-Jewish Russians and Ukrainians who are not allowed to convert to Judaism by the Grand Rabbi). Palestinian-Israelis are nearly 22% of the Israeli citizen population, and they will be 33% in 15-20 years if they aren’t gotten rid of. If one takes all the people ruled by the Israeli state (I.e. including the Occupied Territories), the population is 12.6 million, of whom about half are Palestinians; 4.4 million of them are under military rule, kept stateless, and without basic human rights.

Nor is Netanyahu characterizing the Palestinian position on the West Bank correctly. Saeb Erekat, for instance, has argued that Jews who want to take Palestinian citizenship should be allowed to remain in an independent Palestine. Palestine will be multi-ethnic, including Muslims and Christians, Arabs and Circassians, Armenians and other minorities, as well as likely at least some Jews. So Netanyahu’s contrast of a monolithic “Palestinian nation” to a “binational Israel” is a blatant falsity. And Israel would not be diminished by giving up the West Bank to Palestine! The West Bank was not awarded to Israel by the UN General Assembly in 1947 in the first place, and Israel has only been an occupying power since 1967 (and increasingly a lawless one breaking all the international corpus of laws pertaining to military occupations!) Netanyahu’s view of the situation shows him to be living in a Jabotinskyan fantasy-land that bears no relation to reality.

Binational states are rare. Canada has some elements of it, given the prerogatives of French-speaking Quebec, but it is better seen as federal. Iraq is clearly a binational state.

Belgium likewise is [pdf] genuinely a binational state, as between the Flemish Dutch-speakers and Walloon French-speakers (there is also an accommodation for the small German-speaking community). It has both a territorial federalism and a linguistic-ethnic federalism.

If we put Netanyahu’s words into the mouth of a Belgian prime minister, this is what they would look like:

“They want a Dutch national homeland to be established here next to us, and that Belgium be gradually turned into a bi-national Walloon-Flemish state within our reduced borders…”

“You cannot say we want to break away from the Dutch to prevent a bi-national state — something which has a certain logic — and at the same time give your blessing to a bi-national, Walloon-Flanders state within Belgium’s permanent borders…”

“Belgium gives full equal rights to all of its citizens but it is the national homeland of just one people – the Walloon people.”

You could actually imagine a Catholic Party (French-Walloon) leader saying something like this in 1830 when the country made its revolution and seceded from the Netherlands. But in the past 100 years, and especially in the last couple of decades, Belgium has moved toward being a multicultural, binational state as a way of healing tensions between the Walloons and the Flemish Dutch-speakers. In other words, Netanyahu wants to take Israel and Palestine back to the bad old days of race-based nationalism characteristic of central Europe in the mid-19th century– the kind of Romantic nationalism that gave us Aryan race theory.

Or let’s listen to Netanyahu in a 1960s South African accent:

“They want Bantu national homelands to be established here next to us, and that South Africa be gradually turned into a bi-national Afrikaner-Black African state within our reduced borders…”

“You cannot say we want to break away from Bantustans to prevent a bi-national state — something which has a certain logic — and at the same time give your blessing to a bi-national, Afrikaner-Black state within South Africa’s permanent borders…”

“South Africa gives full equal rights to all of its citizens but it is the national homeland of just one people – the white Afrikaner people.”

I think the racism and offensiveness of what Netanyahu is proposing is obvious if it is considered in the context of other multi-ethnic states.

Defenders of Netanyahu often point to other countries have a state religion. Anglicanism, for instance, is the state religion of Britain, and Lutheranism that of Sweden. But Netanyahu isn’t speaking in religious terms here. He is talking about a national grouping, i.e. a racial one, having a special connection to the soil. In other words, he is hearkening back to Ernst Moritz Arndt’s (d. 1860) notion of “blood and soil.” It is an extremely pernicious form of nationalism, from which Jews suffered horribly.

Netanyahu is also moving in the opposite direction from the more positive developments in the Middle East itself. Iraq’s old Baathist Arab nationalism (qawmiya) had racialized Arabness (which is really just a linguistic group) and had excluded the Kurds, who speak an Indo-European language, from full membership in the Iraqi nation. Interestingly, many Arabic-language news items on Netanyahus speech translate his use of “national” by the Arabic qawmiya, which has overtones of extremist nationalism of a racist sort. The new Iraqi constitution rejects that kind of racist nationalism. It recognizes Kurdish as a national official language (and Turkmen and Aramaic as provincial ones). Without denying the Arab or Muslim identity of the majority, it recognizes the right of the minorities to their own ethnic identities within the nation. It doesn’t say that Iraq is only a homeland for the Arab-Shiite majority.

And Morocco suffered deep political divisions between its Arab majority and Berber/ Amazigh minority in earlier decades. But its new constitution finally recognizes Berber/ Amazigh as an official language and celebrates Amazigh identity as one of the key heritages of all Moroccans, including Arabic speakers. The constitution does say that Islam is the religion of state, while guaranteeing freedom of belief and religion to the country’s Jews and adds:

… the Kingdom of Morocco intends to preserve, in its plenitude and its diversity, its one and indivisible national identity. Its unity, is forged by the melting together of its Arab-Islamic, Berber [amazigh] and Saharan-Hassanic components, nourished and enriched by its African, Andalusian, Hebraic and Mediterranean influences.”

So could we really expect Netanyahu to say that Judaism is the religion of the Israeli state and that:

… Israel intends to preserve, in its plenitude and its diversity, its one and indivisible national identity. Its unity is forged by the melting together of its Jewish and Palestinian components, nourished and enriched by its Hebraic, Arab and Mediterranean influences.”

No. Netanyahu is talking of an indivisible national identity, but its unity is achieved by exclusion, not by melting and inclusion. He does not celebrate Israel’s Arab heritage, but wants to exclude it from any claim on the national homeland, wants to make it lesser. (Arabic is an official language of Israel, but Netanyahu’s rejection of the idea of a binational state makes it clear he thinks it is very much a de facto and unfortunate component of Israel, not something to be celebrated).

“Yesterday Prime Minister Binyamin Netanyahu explained why he is promoting a new Basic Law: ‘The Nation State of the Jewish People’: ‘Israel’s status as the nation-state of the Jewish people is not given sufficient expression in our Basic Laws, and this is what the proposed Basic Law is meant to do’… For 66 years now ‘Israeliness’ has attempted to gain recognition and win independence, and has been rejected repeatedly by the establishment. It has been described as the ‘slivers of people-hood’ whose existence has not been proven, while at the same time, no one seeks to enact a law that will define and protect it. Again and again it is forced to bow before its ‘big sister’, the Jewish state… The creation of Israeli literature, Israeli art, Israeli music, Israeli theatre, Israeli humour, Israeli politics, Israeli sports, an Israeli accent, Israeli grief – are these not enough to speak of an ‘Israeli people’…?” [From [Hebrew language] editorial of left-of-centre, independent broadsheet Ha’aretz]. – [Trans. via BBC Monitoring]

On the other hand, Netanyahu’s project of Greater Israel and annexing the West Bank has made other Israelis less proud of that identity. Hemi Shalev wrote yesterday:

“At a road junction, I bought a flag yesterday. I fixed it to the car window and drove off. A friend who saw the flag asked: What is this flag? He looked at me with amazement and said he did not dream of hoisting the flag this year. He went on to say that the flag had become a symbol of the occupation and repression of the rightists and hilltop youths who wave it in defiance each time they pass through Palestinians villages after committing pogroms in them… With such a symbol, I cannot identify, he said and went away… It is true, he who wanders in Tel Aviv will find that the number of flags on cars has plummeted and so has the number of flags on balconies… It is only the occupation that managed to rob us of the flag and also of Independence Day… And now, the prime minister has also expropriated from us Holocaust Day and turned it into his main propaganda instrument…” [From [Hebrew-language] commentary by Hemi Shalev in left-of-centre, independent broadsheet Ha’aretz ]

And that sense of shame in being colonialists and oppressors is where Netanyahu is taking Israelis in the future, and likely many Jews who identify with Israel, as well.

This won’t end well. It will be in some large part the Likud Party’s fault that they destroyed Israel by being greedy for the West Bank and by keeping the Palestinians stateless and without rights for decades to come. That kind of colonial Apartheid isn’t an enterprise a moral person would want to be associated with.