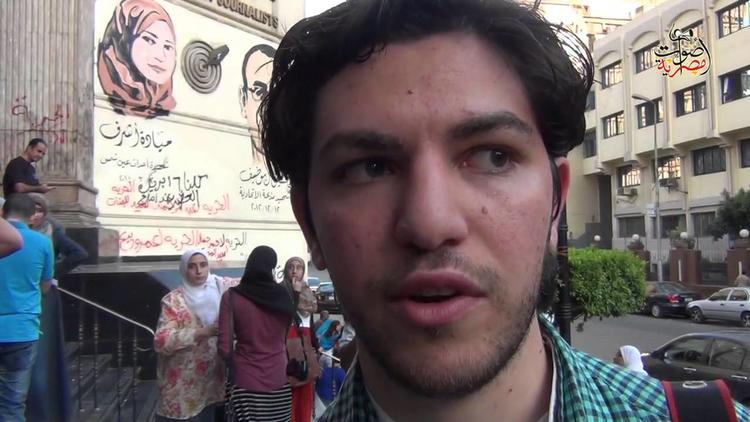 As Abdel Fattah el-Sissi assumes his new role as Egypt’s president, enforced disappearances are on the rise in the Middle East’s most populous country, according to a recent press release by Amnesty International.

Dozens of civilians have been kidnapped by police in plainclothes and detained at military camps since the 2011 uprising, the report said, adding that it often takes days, weeks or even months for the families of the disappeared to figure out where they are held.

One example mentioned in the report is that of Amru Rabea, an engineering student at Cairo University. Rabea — a prominent member of the Ahrar movement, which was founded after the January 25 uprising — was arrested on March 11 at Ramsis Square.

For more than two months after his arrest, Rabea’s family had no idea where he was. The authorities denied his detention. When Rabea finally appeared at the Abassseya court in eastern Cairo on May 22, he told his sister that he was blindfolded for almost the entire time he was kidnapped. Rabea’s shoulder was also dislocated from torture, his sister said, adding that he was first held in Al-Azouly military prison and later taken to Al-Aqrab prison.

“In their last visit to Amru, where they got to speak to him through a glass window, he told his friends that the torture gets so bad sometimes that he would be willing to sign anything, but he doesn’t,” claimed one of Amru’s friends. “There are full days of his life he does not remember.”

No warrant or official records

Hussein Abd El Salam, a researcher at the Egyptian Commission for Rights and Freedom, which documents human rights violations, said that enforced disappearance is a tactic widely used by authoritarian states.

“It is on the rise and especially now, where the police and military have moved from targeting leaders to the random kidnapping of activists,” Abd El Salam said. “While we don’t have an exact number, we estimate it to be in the low thousands.”

Hazem Tarek, the spokesperson for the Students Against the Coup movement, was also kidnapped from a protest on May 19. As an ambulance drove up next to him, police in civilian clothing pulled Tarek into the vehicle, according to another opposition student and friend of Tarek who preferred to stay anonymous. Tarek’s family still knows nothing of his whereabouts.

“The first thing they did was ask police stations and prisons, but all denied holding him,” the opposition student said. “Since then, there haven’t been any major updates. It’s been a week or more and we’re still trying to find him. He’s just gone, literally.”

Abd El Salam explained that there are no prison or security records of disappeared persons, which makes it easier to hide the exact number of political detainees in Egypt. In the case of normal arrests, the police are responsible for protecting the defendants and can face bad publicity or criminal charges if deliberate death or torture could be proven.

Nasser Amin, a leading figure at the National Council for Human Rights, a government-backed body, stated that they “did not receive any information about the Ministry of Interior kidnapping youth from the streets, and if this does take place then it is against the law and against human rights. The new constitution states clearly that any detainee has the right to have clear charges made against him and has the right to immediate access to lawyers.”

“In Egypt, the Ministry of Interior [the police] and the military use disappearance as a weapon to coerce the opposition, break its spirit and extract testimonies,” said Abd El Salam. “Usually there are no official criminal charges against the disappeared persons.”

The victims are usually taken to military prisons in the Ismailia and Suez governorates or to a state security prison in Lazoghly. The most prominent prisons are Al-Aqrab and Al-Azouly prisons inside the Al-Galaa military camp in Ismailia, the Amnesty report stated. Activists often refer to these military prisons as the “Guantánamo Bay of Egypt.”

“The main goal, of course, is to install terror in the opposition or dissenters by telling them that they can simply disappear in a moment’s notice,” said Abd El Salam. “The other goal is to put that person outside the protection of the law.”

He explained that those who are kidnapped are then subjected to extreme torture — including whipping, burning, hanging, electrocuting, water boarding, beating and rape — to forcefully extract testimonies before being moved to ordinary prisons. Many have reportedly died from this torture.

“The idea is that the state abuses its monopoly over the use of power to arrest activists and to create false charges against them,” said Ahmed Ezzat, a lawyer for the independent Association for Freedom of Thought and Expression. By disappearing its critics, the government “ignores the right of the community and the family to know the whereabouts of the victim. This makes it very difficult for lawyers to defend the detainees since they are not even allowed visits.”

The tactic is not a new one. According to Abd El Salam, security forces in Egypt have been utilizing this tactic since 1952. During the Nasser era, the tactic was so widespread that people simply knew any politically active person who disappeared was in a military or state security prison. The most prominent user of this tactic has always been the State Security Agency, which is now known as National Security.

“During Mubarak’s rule, it was most prominently used against Islamist opponents,” said Abd El Salam. “There was even a term for State Security kidnappers: visitors of the night.”

In Sinai, especially, the military is notoriously known for disappearing anyone whom it identifies as “terrorists,” he said, adding that usually detainees are charged with killing officers or soldiers.

“Every day we wake up to something new in this country,” said Hazem Tarek’s friend. “Now it has come to the point that a person you know could end up lost in a couple of hours. It makes you really scared.”