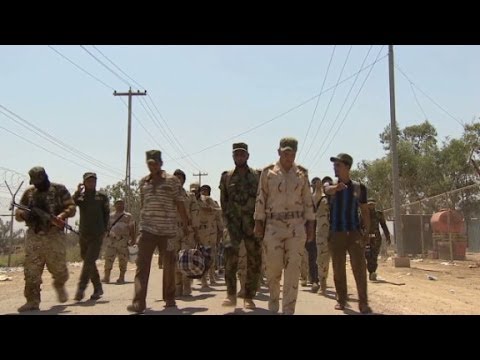 Volunteers on the streets of Baghdad who have responded to the call to defend Iraq.

Thousands of Shiites have volunteered to fight Sunni extremists in Iraq. But in the clashes between extremist groups and volunteers, the illegal Shiite militia groups are proving by far the best fighters – while hapless volunteers are getting shot going to pick up drinking water.

“Army helicopters were flying over our heads and they were dropping bottles of drinking water in an uninhabited area south of Tikrit,” says a young Iraqi man, Hassan Munir, who volunteered for the Iraqi army recently to help fight Sunni Muslim extremists; Munir recently returned to Baghdad after a tour of duty. “We thought we were about to die of thirst.”

Munir, who is 20, was lucky enough to return from this tour of duty. But many others have not. Since one of the country’s leading religious authorities, the Grand Ayatollah Ali al-Sistani, called upon all Iraqis to fight against the extremists by joining the Iraqi army, thousands of young men – some even say, millions – have come from central and southern Iraq to do so.

Authorities in provinces in southern Iraq have said that, on average around 10,000 volunteers have come from each state while Iraqi Deputy Prime Minister Hussein al-Shahristani has said that there are around 2 million volunteers.

Once volunteers have enrolled, they undergo a quick round of intensive training before they are sent to participate in on-going military operations.

However despite the large number of volunteers, there are serious problems about how to benefit from them all. According to sources within the armed forces, the biggest issue is how to integrate the volunteers into the trained military units.

A lot of the volunteers have been dispatched to guard holy sites and shrines. Recent photographs and videos show hundreds of them being taken to the central Iraqi city of Samarra, in the Salahaddin province, the site of one of Shiite Islam’s most sacred shrines. But in those pictures and films, the volunteers look bedraggled, as though they had travelled far longer distances in the sun and in the heat before reaching the area, than they actually have. It is summer in Iraq and daily temperatures can go up to 45 degrees C.

All of the volunteers are excited and inspired about defending the shrines and fighting the IS group, the recently returned Munir said. But conditions are very difficult, he admitted.

“Some officers are reluctant to have volunteers participate in battles and so they only give them guard duties and put them in the back lines when the army gets into actual fighting against the militants,” Munir recalled.

A source within the Iraqi army, who did not wish to be named, said that there was a need for more manpower because the fighters from the IS group were moving very quickly. “Everyone is rushing to engage the volunteers in fighting in the hopes that they will make a difference,” the source said.

Not all of the volunteers are cause for concern. Some volunteers come from, or are comprised of, Shiite Muslim militia groups that already exist. And they have a far more influential role to play in fighting groups like the IS militia, possibly because they come from similar, more extremist backgrounds as well as street fighting experiences.

Some analysts are now suggesting the certain areas in Samarra and in the Diyala province are controlled by members of Shiite militias like the League of the Righteous and the Badr movement as well as the formerly disbanded Mahdi army.

The same source told NIQASH that the road between Baghdad and Samarra had come under the control of Shiite Muslim militias who had conducted “high quality and successful operations” there.

“The Iraqi army depends on us because we are better at guerrilla warfare,” Sijad Abdul-Hussein, a member of one of these groups, said, adding that their current role was all about clearing roads to Shiite Muslim centres.

Operations around Baghdad, Diyala and Samarra now seem split between Iraqi army elite units and the Shiite Muslim militias, who have grown stronger as their own experienced fighters have returned to Iraq from the civil war in Syria.