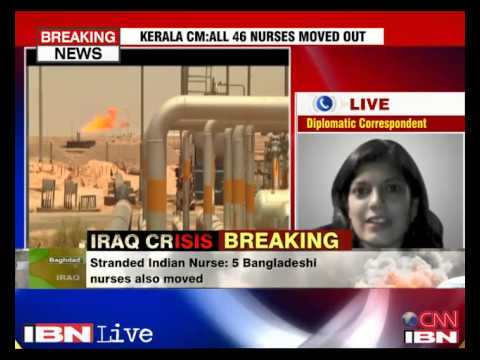 It has been several weeks since Sunni Muslim extremists took over the northern Iraqi city of Mosul. Locals continue to adapt to their new circumstances; tensions are rising because of fighting outside the city, fuel and food stocks continue to dwindle and the Sunni militia are starting to enforce their more extreme rules.

All traces of the Iraqi state are being erased in Mosul. Just over two weeks after gunmen from Sunni extremist militias took over the northern Iraqi city, there are no other flags here anymore – just black flags of different sizes fluttering on various rooftops. The flags are similar to those placed around the city every year during the sacred Islamic month of Muharram but the difference is that all of the extremists’ flags are black while the festival flags were coloured.

The first sign of the fact that the Iraqi state has left comes at Mosul’s main court buildings. Only a few days after fighters from the extremist group formerly known as the Islamic State of Iraq and Syria, which recently changed its name to the Islamic State, or IS, took over the city, local man Muyasar al-Hattab went to the city courts. He had worked at the court and he wanted to know what was going to happen to him and his colleagues now.

A bearded man with a gun was guarding the court buildings and he told al-Hattab that the former court, in its previous incarnation, was illegal because it operated using laws created by humans, rather than laws created by God. “Our new law is the Koran and Sunnah [the Sunni Muslim version of Islam],” the bearded gunman told him.

Al-Hattab left the place where he had worked for 25 years – he had never seen the court buildings as quiet as they were that day – taking his memories of the place with him, knowing he was unlikely to ever return while the city was controlled by the IS group.

The people of Mosul have gossiped about the courts and their application of Sharia law – laws based upon the Islamic religion; they say that every court is now headed by a cleric, who was chosen by the IS group, and that cleric gives the verdict, no matter what kind of case he is presiding over and whether he has any knowledge of the subject matter or not.

In practice though, a lot of locals are turning to the emirs, or leaders, in the different sectors of the city whenever they have a problem.

The IS group has also started to apply the “spoils of war” law, that’s stipulated in Sharia code and which is about 1,400 years old. This says that the Islamic state is allowed to take over goods and property left behind by those who fled their Islamic fighters. And the IS group has already started confiscating assets of senior officials and Iraqi officers who fled Mosul, with some taking over their houses to live in.

In the first few days after Mosul fell to the Sunni Muslim extremists, the people of the city had been allowed to move around relatively freely. The gunmen tended not to stop cars at checkpoints and simply let them pass through with a wave of their hands.

On the day I came into Mosul, a masked gunman just waved us through. But this time when I left Mosul, in order to go shopping in parts of the countryside that were better supplied than the city, things had changed. I left the city together with a group of young people and as we were going, a gunman approached us.

He asked for our identification and what we did for a living. “Are you sure there are no police or soldiers among your group?,” he asked. We denied that there were but he continued to stare at us suspiciously for a long time. Eventually he let us go.

As our taxi driver then told us, rather enthusiastically: “They’re now looking for police and military men who are trying to leave Mosul. The IS group have accurate numbers on how many there were in the city and they know that the number of people who repented are far lower than the real number in the city. So they have decided it is time to hunt for them,” the driver explained.

The extremist group had said that any former police or soldiers could repent for their jobs at designated mosques and then be pardoned.

In terms of our shopping mission, a lot of the people of Mosul have done the same thing; their fear of ongoing shortages has forced them to leave the city and go and buy supplies from elsewhere. Previously their best bet was to enter the semi-autonomous state of Iraqi Kurdistan to get supplies. However more recently the two sides – the IS group and the Iraqi Kurdish military – have been clashing and this makes it harder for Mosul locals to return home.

We had this problem. We had to wait for hours to get back into Mosul because of fighting between IS militants and the Iraqi Kurdish military. We passed through large numbers of Iraqi Kurdish troops and saw scenes of destruction. Only 300 meters away from the Iraqi Kurdish checkpoint we were met by crowds of IS fighters carrying the distinctive black flag. As we drove forward, we began to see their faces clearly in our car headlights.

However before we got to them, they pointed their guns at us and told us to turn back. Our driver got out and tried to talk to them but they fired their guns over his head. So we had to retreat. And we only managed to get back into Mosul the next day, after spending the night at a friend’s house in Bashiqua, and along another road. There were dozens of other cars carrying Mosul families who were in a similar predicament. Situations like this has meant that many locals now prefer to shop for supplies in Hasaka, in Syria, just over the border. The roads into this area are open and they can get gas there too, which is becoming harder and harder to get inside Mosul.

In fact, as the days go by, there are fewer and fewer cars on Mosul’s roads. Queues of cars waiting for petrol stretching several kilometres have become a common sight.

One man, Mahmoud al-Houri, spent two days in one such queue – just to get 20 litres of gasoline. He took a mattress, a pillow, some food and water and even a football so he could entertain himself.

In a nearby open space, the young people waiting in the queue had set up a makeshift football pitch, with big stones to show where the goals are.

“It’s the World Cup of getting gas,” one of the people waiting in the petrol station queue joked.

There are other changes in Mosul too as the locals adapt. Fashions have changed there as the outfits favoured by the IS fighters become increasingly popular with locals, especially young people. The knee-length, long-sleeved shirt and baggy pants are becoming fashionable and Mosul’s tailors and clothing manufacturers have started making the look for the fighters and the locals.

Another change is in the IS group’s attitude toward local minorities. They have tried to make it clear that Christians in Mosul are safe but recently the group also sent out an official letter to some service-related departments – such as that pertaining to water and sewage – saying that Christians were banned from working there.

Amid all of these small changes, there was one large change that couldn’t be ignored – the Syrian government’s air force has started shelling the nearby border district of Biaj where the IS fighters have their camps.

The people of Mosul can only continue to adapt to their new circumstances. And wait, endlessly wait.