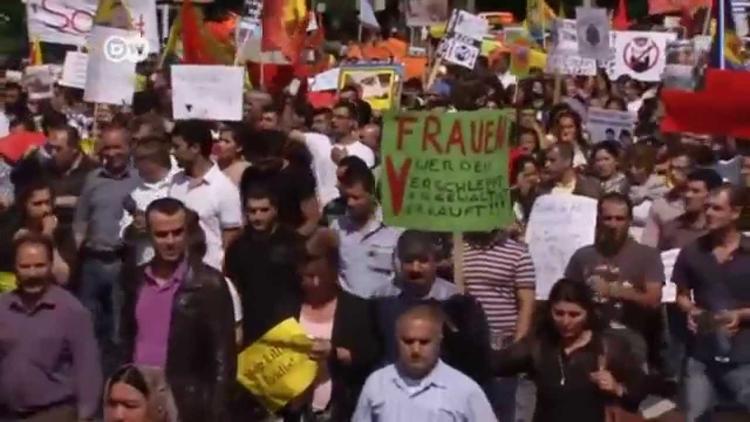 By Petr Kubalek via RFE/RL

Islamic militants this week encircled thousands of members of the Yazidi minority in northern Iraq, prompting the Obama administration to carry out humanitarian air drops to the refugees who fled their homes to Mount Sinjar. Here are answers to six questions about the Yazidi people, religion, and history.

Who Are The Yazidis?

The Yazidis are socio-religious group that is traditionally rural — namely farmers or shepherds — and whose members are primarily native Kurdish speakers. Their numbers worldwide likely do not exceed 1 million.

The traditional community leader, who carries the title “mir,” or “prince,” resides in the town of Ain Sifni, east of the city of Mosul in northern Iraq. The main Yazidi temple is nearby in the valley of Lalish, considered a holy site among the Yazidis. The famous British mystery writer Agatha Christie once described the temple as one of the most beautiful places she had ever seen.

Are They Exclusive To Iraq?

Most Yazidis live in Iraq, where their numbers are estimated at between 500,000 and 700,000. Most of the population lives in the Sinjar Mountains west of Mosul. The political and intellectual centers of Yazidism lie in the Sheikhan district just east of Mosul. Tens of thousands of Yazidis live in other countries, including Syria, Armenia, Georgia, Germany, and Russia. A Yazidi population was also documented in Iran in the early 20th century.

What Is Their Religion?

The origins of Yazidism are linked to Sheikh Adi (ca. 1073-1163 AD), a Muslim preacher born in present-day Lebanon who gathered disciples in the mountains east of Mosul city and ultimately settled in Lalish.

Initially an Islamic mystical fellowship, Adi’s followers developed a strong cult of personality around their leader, and pre-Islamic beliefs gradually prevailed in their faith.

The Yazidis expanded through tribal alliances and conversions, especially by Christians. Conversions to and from Yazidism were later banned. The community is divided into two priestly castes and one lay caste. These castes can mix freely but cannot intermarry.

The priestly castes are responsible for rituals in Yazidism, whose central belief is reincarnation and the existence of one God who can assume angelic and human incarnations.

Religious texts are in the Kurmanji dialect of Kurdish and are memorized orally by some members of the clerical classes. The lack of a unified written canon has led to the absence of a systemized theology. Yazidi beliefs integrate numerous aspects of Islamic mysticism (Sufism) and the ancient Iranian religion pre-dating Zoroastrianism, as well as Gnosticism, Greek mythology, Judaism, and Christianity.

Yazidis believe that they were conceived from Adam’s semen and that, unlike the rest of humanity, they have no relation to Eve.

Have They Historically Suffered Persecution?

Persecution of the Yazidis dates back to the community’s earliest years, when they were attacked by the local rulers of Mosul and the nearby Kurdish principalities on suspicion that they were Islamic heretics. These attacks between 1254 and 1415 solidified the development of Yazidism as a religion separate from Islam and led to the militarization of the Yazidis.

Later the Yazidis found a place in Kurdish power structures that crumbled in 19th century, in part due to Ottoman centralization efforts. They subsequently faced increasing attacks from local rulers and tribal chiefs, prompting a Yazidi exodus to the Russian Empire from what is now Turkey.

An 1892 expedition led by the Ottoman governor of Mosul massacred Yazidis and forced their leaders to convert to Islam. The Yazidi temple in Lalish was then turned into mosque until 1904.

In modern times, the weakened Yazidi community became ensnared in fighting between Kurdish liberation groups and government forces. In Turkey, this led to virtually all of the country’s Yazidis to seek refuge in Germany.

In Iraq, the once-flourishing agriculture in the Sinjar Mountains was destroyed and the population moved to compounds in the desert. After the fall of Iraqi dictator Saddam Hussein, the Yazidis were increasingly targeted by Islamic militants. A wave of suicide truck bombings on August 14, 2007, claimed the lives of some 800 Yazidis in Sinjar and remains the deadliest terrorist attack in Iraq to date.

The Yazidis currently have a quota for seats in the Iraqi parliament, Kurdistan’s regional parliament, and some provincial councils in both Kurdistan and the rest of Iraq.

On the one hand, Yazidis are often viewed with suspicion by their Muslim neighbors. The name of their group misleadingly suggests ties to the Caliph Yazid I, a 7th-century figure of the Christian era who is remembered as a profligate by Sunni Muslims and hated by Shiite Muslims for killing their leader, Imam Husayn.

The term “Yazidi” is actually an arabicized version of the group’s original Kurdish name, “Ezidi,” and appears to overemphasize the role of the caliph in the group’s mythology.

Adherents of Islam and other religions have also labeled them “devil worshippers” due to a misunderstanding of Yazidi theology. The joint participation of Yazidi men and women in festivities has also sparked rumors of illicit sexual practices. The massacres of the 19th century only served to deepen the Yazidis’ suspicion of Muslims.

On the other hand, the social tradition of the “kiriv,” a man selected to sponsor a boy’s circumcision party, has become a mechanism of establishing friendly bonds between Yazidis, Muslims, and Christians in and around Mosul.

Yazidis have enjoyed friendly relations with other minorities in the region, especially Christians. The Yazidis of Sinjar sheltered Armenians who escaped from mass killings by the Ottoman Empire in 1915, and some Yazidis in what is now Turkey converted to Christianity in the 19th and 20th centuries.

Yazidis Are Said To Shun Lettuce. Why?

Yazidi culture has featured numerous bans related to speech, behavior, and food. The most universal of these is a ban on pronouncing the name of Satan. Most other taboos have been specific to certain places, times, or social groups.

The case of lettuce offers several interpretations of the ban on its consumption. First of all, there is a linguistic similarity between the Kurdish word for lettuce (“khass”) and the name the Yazidis used to describe saints (“khaass”).

Yazidi tradition also speaks of the killing of one of its saints, Sheikh Hasan, in an incident involving lettuce. Others said the ban stems from the massacre of Yazidis by the Ottoman Empire in the lettuce fields of what is now northern Iraq.

Lettuce also features prominently in Greek mythology, elements of which Yazidis have infused in their religion. In one myth, the Greek god Adonis is said to have been killed by a wild boar in a field of lettuce.