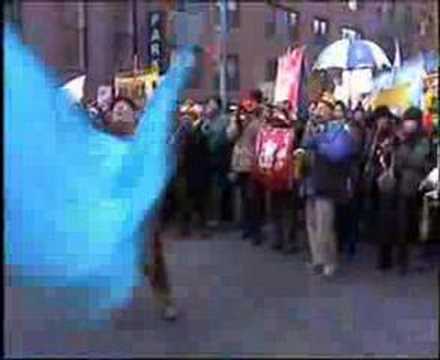 Don’t get me wrong. I am all for demonstrating and admire everyone who came out in New York City on Sunday (some 400,000 according to Time magazine) to demand that world leaders deal urgently with climate change.

But I just do have to point out that holding large rallies doesn’t always result in political change. It is by organizing at the district level, walking neighborhoods, and putting pressure on those running for Congress that we would get real legislative change. Some activists are such purists that they sniff at giving political contributions. Likewise, disinvestment from oil and gas companies is a great symbolic gesture but it doesn’t stop global warming.

More actual carbon would be taken out of the atmosphere if all homeowners put solar panels on their roofs and get an electric car.

In the end, a single-issue Climate PAC, if well-funded, would make far more difference than standing in the street. Much climate action will have to be done or coordinated by politicians, and at the moment most of those in Washington are owned by Big Oil, including by the Koch brothers.

Here are some very large rallies that were ignored for all practical purposes:

1. On February 15, 2003, several hundred thousand demonstrated in New York and London against the building Iraq War. The police chief of NYC played them down as only 100,000. The Bush administration invaded and occupied Iraq a little over a month later.

2. Nov. 15, 1969 half a million people gathered in Washington DC to protest the Vietnam War. Nixon and Kissinger deliberately prolonged it until 1973.

3. On January 27, 1991, some 75,000 protesters rallied in Washington, DC, against the Gulf War. The Gulf War nevertheless continued to be prosecuted, ending on 28 February after Iraqi tanks fled the capital (many were massacred from the air by the US Air Force as they tried to flee.)

4. Some 100,000 demonstrated in Madison, Wisconsin, against the plan of Gov. Scott Walker to remove bargaining rights from public sector workers. Walker’s actions were upheld this summer.

5. On Nov. 18, 2011, thousands of Occupy Wall Street protesters gathered in NYC and other cities to protest the lack of accountability for big banks and investment firms who had caused the 2008-2009 economic meltdown. It is still the case that almost no one was prosecuted despite clear signs of illegality, and fines have been a slap on the wrist.

Having marches and promoting divestment are great activities and build esprit de corps in the movement. But if people hold a big demonstration and go home, it has no effect. The next stage has to be competing for our Congress representatives and senators against entrenched and very wealthy hydrocarbon industries. The gerrymandering that has produced a structural Republican majority in the House means that climate activists need to find GOP challengers who are deeply concerned about global warming and who are willing to primary the incumbent.

ANTIWAR PROTEST IN NEW YORK : Half a million protesters