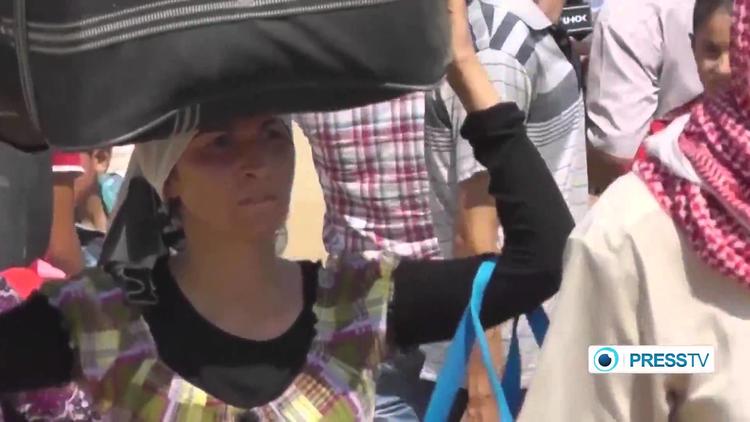 The spectacular conquests by the Islamic State have held much of the world’s attention ever since it took control of Mosul, Iraq’s second largest city. Adding to this attention are the US airstrikes in northern Iraq, where the group targeted minority populations, kidnapping and killing hundreds – maybe thousands – and displacing thousands more.

But these high-profile killings and abductions are only part of the story of the horrendous abuses Iraqi civilians are suffering, including from government troops and Shiite militias. I met in recent days with more than 40 residents of Latifiyya, a town in the area known as the ‘Baghdad Belt’ whose population size, they said, has been reduced from approximately 200,000 to 50,000 in recent months. The town is majority Sunni with a sizeable Shia population.

The town is strategically located at the crossroads connecting four provinces – Baghdad, Babel, Wasit and Anbar. During the US-led occupation of Iraq, US troops named Latifiyya and the neighbouring towns Yousifiyya and Mahmoudiyya the ‘triangle of death’ because of the strong al-Qaeda presence. Though Latifiyya is particularly vulnerable right now, the abuses residents described are very similar to what we’ve been finding in the Baghdad Belt and other parts of Iraq for months.

The area’s majority Sunni population is paying a high price for the town’s location and its reputation for being restive. Residents told me that Shia militias, still operating under the control of former Prime Minister Nuri al-Maliki, are laying siege to the town, especially the Asa’ib Ahl al-Haqq militia. Sunni residents of other towns to the north accused that group and other militias of carrying out summary executions there after the militas took control in the wake of US air strikes against the Islamic State.

The militias, along with federal police and the Iraqi army’s infamous seventeenth division, have kidnapped and killed dozens of residents in Latifiyya, the residents told me – but their stories are falling on deaf ears in Washington.

A taxi driver said he saw a car stop next to two men. The men inside the car ordered the two to sit on the street. “Two men got out of the car, shot them both in the head, got back in their car and made a U-turn,” the taxi driver told me. ”Everyone assumes this is Asa’ib [Ahl al-Haqq], and all of this was just 50 meters from the federal police checkpoint.”

The taxi driver, who has since fled the area, told me that, “These kinds of things are happening all the time.”

Over a dozen other Latifiyya residents told me that militias have destroyed the area with bulldozers and explosions since the beginning of June, with repeated militia attacks against Sunni residents and their property, despite the absence of active combat in the town.

“It is a peaceful neighbourhood,” one resident told me, echoing a number of others. “We always lived side by side. But now militias come to Sunnis’ homes and destroy them.”

On June 11, militiamen took 137 men from the Um Weilha market in Latifiyya, according to residents and local media reports. Police have found the bodies of about 30 of them, but no one has heard any information about the rest.

“We’re sure many of them are dead by now,” said a man whose two teenage sons are among the missing. “But there has been no investigation at all. Whether we ask investigation judges from the Interior Ministry or at police stations, no one gives us any information.” He doesn’t know whether his sons are dead or alive.

I heard dozens of stories like this in Latifiyya and other ‘Baghdad Belt’ towns. In many areas most men have either been killed or fled, the residents said. The killings are causing a broader humanitarian crisis. Without a breadwinner and with their neighbourhoods under siege, many of the women and children who remain there don’t have access to food or desalinated water.

These allegations echo atrocities we have documented in recent months by militias backed by Maliki’s government and security forces, underscoring the urgent need for Washington and its allies to pay attention to what’s happening in parts of Iraq that are largely hidden from view , including the Baghdad Belt, Diyala, Hilla and Anbar.

With a new government in Iraq, the US has the opportunity to raise the abuses Shia militias and Iraqi security forces have committed and to make sure that US intervention in Iraq does not embolden militias whose crimes remain unnoticed and unpunished. The US and its allies should be aware that if they facilitate abuses by Iraqi forces and militia through military assistance, they risk complicity in crimes.

“Even those who manage to escape are not free,” a Latifiyya man told me. “People like me, in Baghdad, are constantly humiliated. At checkpoints they treat me like a criminal because they see my ID is from Latifiyya and that I am Sunni. I’m afraid to move around the city – I’m trapped with nowhere to go.”

Failure to address the broader effects of international assistance in Iraq’s fight promises to further polarize Iraq’s communities, multiply abuses, and may ultimately undermine the efforts against the Islamic State: it threatens to push Sunnis directly into the Islamic State’s waiting arms.