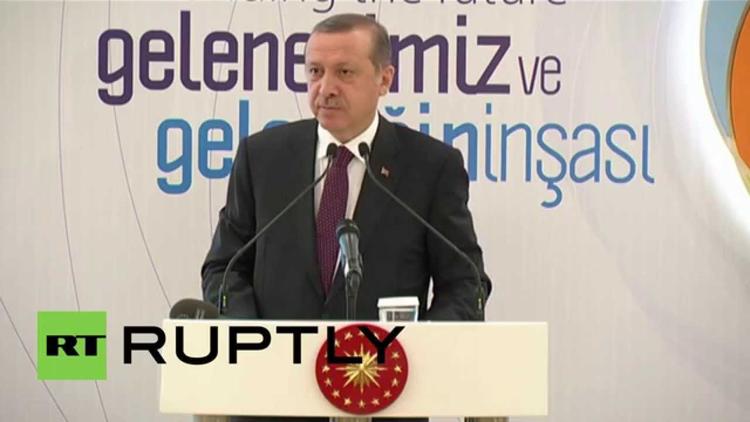 “Recep Tayyip Erdogan, Turkish President (Turkish): ”Two Ottoman ships left Istanbul port to Basra Bay through Cape hope in 1866 but somehow they lost their course in the Atlantic Ocean and reached the city of Rio in Brazil. The wise man of Islam called Ahmed Afandi in the ship stayed in Brazil and wander around the Latin American countries to tell Islam to the Latin American people. I want you to pay attention here, the meeting of the Latin America with Islam goes back to the 12th century.”

Recep Tayyip Erdogan, Turkish President (Turkish): “It is claimed that the Land of America has been discovered by Christopher Columbus in 1492, but Muslim sailors reached the Land of America in 1178, 314 years before Columbus. Moreover it is mentioned in Columbus’ diary that there was a mosque on the top of a hill along the Cuban shore. Me and my Cuban Brother would talk about that a Mosque would look so good on the top of that hill.”
C/U Recep Tayyip Erdogan in audience . . .”

“Turkish President Recep Tayyip Erdogan stated that the Americas had been discovered by Muslims more than three centuries before Christopher Columbus during a summit in Istanbul, Saturday. Addressing an audience of Muslim leaders from South America, Erdogan declared “I want you to pay attention here, the meeting of the Latin America with Islam goes back to the 12th century.” He added that “Muslim sailors reached the Land of America in 1178, 314 years before Columbus.”

The leader of the Justice and Development party’s (AKP) comments relate to controversial research carried out by Turkish scholar Youssef Mroueh, in which the historian refers to a diary entry from Columbus mentioning a mosque in Cuba. Erdogan went on to state Ankara would be happy to build a mosque at the site mentioned by the Columbus.

The claims have been widely disputed by a number of scholars. The quote that Erdogan ascribes to Columbus actually reads as a simile, according to the primary source of the information Bartholome de Casas. “He describes its mountains as lofty and beautiful, like the Pena de las Enamoradas, and one of them has another little hill on its summit, like a graceful mosque,” reads the entry.”