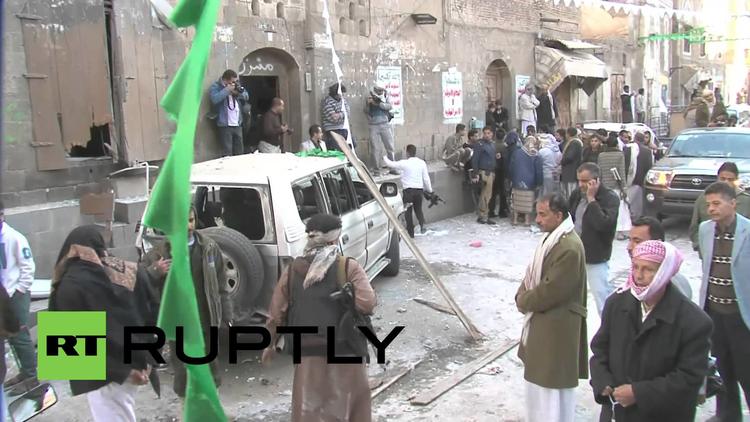 After a negotiated transfer of power agreed in early 2012, the annual death toll dropped to about 1,100 and nearly halved again in 2013 to fewer than 600, according to the International Crisis Group.

The uptick in violence in 2014 is the result of a number of distinct but inter-related internal conflicts, many of which came to a head in 2014. The killings have also raised fresh doubts about whether the Red Sea state’s political transition will succeed.

What is behind the violence?

In 2011 Yemenis took to the streets inspired by other Arab uprisings to call for the resignation of their dictatorial president, Ali Abdallah Saleh, in power since 1978.

In November that year, after 10 months of mounting violence, Saleh agreed – on condition of full legal immunity – to hand over power to his deputy, Abd Rabbu Mansour Hadi, who then won a single-candidate election.

The government immediately deployed ground forces to reclaim territory from Ansar Al Shariah, a newly-formed affiliate of Yemen-based Al Qaeda in the Arabian Peninsula (AQAP), while the US stepped up unmanned drone attacks against Islamist militants.

A national dialogue process aimed to encourage all sides to talk. Yet the talks faltered, and a National Dialogue Conference (NDC) to redraft a failed social contract struggled. In January 2014 the NDC did, however, reach an agreement on the basis of a new constitution and regional autonomy.

Nevertheless, the chaos of 2011 has created a security vacuum which numerous armed groups exploited.

Of these, two in particular have benefited from the breakdown of the state. AQAP, based mostly in the southern and eastern provinces, has grown in influence, while the northern Houthi rebels have also taken the opportunity to claim control of new territory after withdrawing from the NDC.

After a controversial hike in fuel prices, in late September heavily-armed Houthi brigades stormed the capital Sana’a – taking over key ministries and media networks. Sunni Islamist AQAP, which has long been hostile to the Shia-Zaydi Houthis, has reacted to the power play with violence. Attacks on Houthi targets, including a series of car and suicide bombs, has further destabilized the country, with many Houthi casualties.

What has helped AQAP grow?

AQAP announced its formation in January 2009. US State Department estimates of the organization’s size have ranged from “a few hundred members” to “close to a thousand members” while noting that it is difficult to give accurate figures.

The group hit global headlines in December after two of their hostages, US photojournalist Luke Somers and South African teacher Pierre Korkie, were killed during a failed rescue attempt by US Special Forces.

In addition to the Yemeni armed forces trying to take on the militants, the US has been targeting AQAP in Yemen with unmanned drones. The high profile examples of civilian casualties caused by drones have proved controversial.

Investigative journalist Mohammad Al Moayad grew up in Hadhramaut Province which is now a centre of gravity for AQAP and specializes in the group’s workings.

He puts their growth partly down to their lack of willingness to compromise, which has helped increase levels of respect with many Yemenis. “Unlike their predecessors, AQAP and its new generation of leaders have succeeded so well in Yemen due [to] their uncompromising stance against the government,” he said. “AQAP did not negotiate with Saleh and they do not negotiate with Hadi. This discipline is reflected in AQAP’s determination to strike US soil, the Saudi Kingdom and anyone associated with the Yemeni government.”

Are the Houthis seeking to dominate the country?

Many feel the Houthi march on Sana’a has benefited AQAP as they have been able to form new alliances with tribesmen angered by the Houthi attitudes. In recent days the Houthis have claimed control of the country’s central bank and state media organizations.

Yet Adam Baron, a visiting fellow at the European Council on Foreign Relations (ECFR), told IRIN they were not seeking to completely dominate the state. “The Houthis continue to show some respect to government institutions – and regardless of their opponents’ claims to the contrary – do show a general desire to work within the state rather than to completely overthrow it, although there remains the question of how much of this is mere rhetoric,” he said.

“It is generally quite flawed to cast [the Houthis and AQAP] as two sides of the same coin,” he said. “The Houthis are ultimately a mainstream group at this point, and regardless of their alleged ties to Iran, the fact remains that the Houthis and their supporters are motivated by internal dynamics. They are an indigenous group rooted in local issues.”

The territorial gains of the Shia Houthis in Sana’a have also upset Sunni majority Saudi Arabia, a major financial supporter of Yemen, which in recent weeks has put on hold a planned disbursement of US$700 million in military aid.

What does the conflict mean for ordinary Yemenis?

Yemen is the poorest country in the Middle East and is ranked 154 (out of 187) on the 2014 Human Development Report.

According to the UN Office for Coordination of Humanitarian Affairs (OCHA), during 2015 close to 16 million people in Yemen will need humanitarian assistance, of whom eight million are children.

More than 330,000 Yemenis are internally displaced due to pockets of conflict and the country is also hosting some 250,000 refugees, mostly from Somalia and the Horn of Africa, who use Yemen as a route into Saudi Arabia.

Dr Abdulla Radman, deputy medical coordinator for Doctors Without Borders (MSF), said that as well as an uptick in violence, his doctors had noticed increasing cases of psychological trauma among the Yemenis they work with.

“Many people have abandoned their homes for safer places, but these places often have poor infrastructure. Usually, when people flee their homes to other areas, they do not prepare themselves for the trip, and they only have the clothes they are wearing, with no food,” he said.

“They often have difficulty accessing health facilities, especially if the fighting is still ongoing… Some even seek refuge in caves.”

He added that during periods of conflict, “people refrain from going to health facilities even if they are not [displaced] and not part of the fighting.”

Yemen’s complex mosaic of conflicts and the various different actors make aid access hard to navigate and the security risks for humanitarian staff are high.

According to a May 2014 study by Safer Yemen, a Sana’a-based security consultancy, there has been a “dramatic increase in kidnappings” in the past four years, “going from only one incident in 2010 to 19 in 2013, the highest number of incidents recorded in one year since the kidnapping of foreigners started in Yemen in the late-1980s.”

The study also noted that the perpetrators and their motivations had previously fallen into three distinct categories “tribal, political and criminal”, but since the political transition in 2011 these lines had become more blurred.

Members of the international community, including aid workers, have also become greater targets and this has been driven by the payment of high ransoms. However, in contrast to the extremely high incidences of kidnapping in the first six months of 2014, there have been few politically motivated abductions during the second half of the year.

An analyst at Safer Yemen, who preferred to remain anonymous for security reasons*, told IRIN: “Security risks were becoming increasingly difficult to anticipate, mitigate and manage.”

“Social and traditional norms that have previously served to protect NGOs among other actors in the Yemeni society are eroding,” the analyst said.

The rise in kidnapping and unpredictability means many aid organizations are restricted in where they can work.

Fernando Carvajal, a Yemen specialist and NGO consultant at Exeter University, said most organizations operating in the country were doing so “with only essential staff”, which he said was not enough to support the level of crisis.

“Most major aid organizations began reducing foreign staff since early 2013 and since 2013 have had contingency plans for emergency evacuations from Sana`a, Taiz, and Aden,” he said.

“It’s not an easy place to work. Security threats are everywhere. It comes with the territory,” explained the director of an IDP-focused relief organization in northwestern Hajjah Province, who did not want to give his name. “Adapting to fluid conditions is the key to running a successful humanitarian mission in Yemen,” he said. “You work where you can, when you can.”

Yet aid workers are still able to operate in many regions, even those hit by violence. Marie-Claire Feghali, Yemen spokesperson at the International Committee of the Red Cross (ICRC), said they had been able to improve their access in the past year due to better communication with all parties in the conflict.

“We have been able in the past months to reach many areas we could not go to before for various reasons, security being one. This has improved considerably in the past year, thanks first to a long-standing presence of the ICRC in Yemen [since 1962] and a better knowledge and acceptance amongst the population for the ICRC, its mandate and humanitarian mission in conflict areas.”

What next for Yemen?

Unsurprisingly, the deteriorating security situation and the withdrawal of Saudi support means there is little optimism about 2015 either economically or politically. The UN envoy to the country has warned that the state may be unable to pay its civil servants within months.

ECFR’s Baron summarized the scale of the crisis. “It is difficult to overstate the economic challenges facing Yemen: roughly half of all Yemenis are below the poverty line, and the government is on the brink of financial collapse…

“The economy is in tatters, the government’s control over much of the country borders on nonexistent, and planned parliamentary and presidential elections appear to be postponed indefinitely,” he said.

He added that a newly-formed government had shown signs of willingness to tackle corruption and governance failures but “ultimately, as things stand, the conditions that spurred the country’s 2011 uprising have only been exacerbated.”