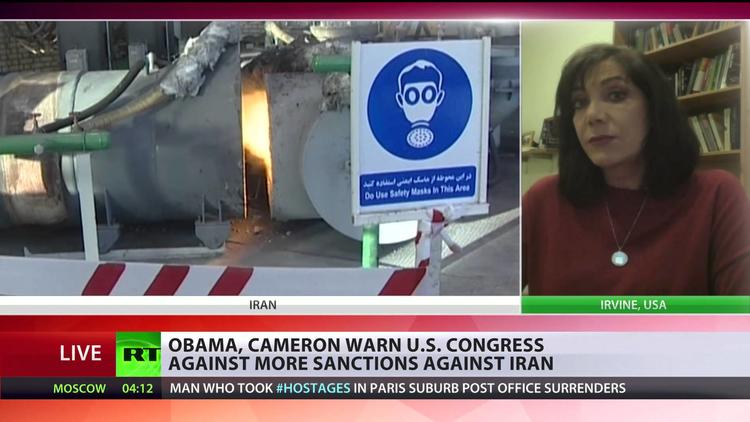 GENEVA — Iranian Foreign Minister Mohammad Javad Zarif says "political will" is needed to make progress in negotiations over Iran's nuclear program but that he believes such progress is "possible."

He told journalists he had also spoken with Russian Deputy Foreign Minister Sergei Ryabkov and that he would speak by telephone on January 17 with British Foreign Secretary Phillip Hammond.

Representatives of Iran and the United States are continuing talks in Geneva on January 17 in the presence of a delegation from the European Union.

Further talks involving all parties are expected on January 18.

U.S. President Barack Obama on January 16 asked Congress to refrain from imposing fresh sanctions against Iran while negotiations on a permanent nuclear deal are under way.

Obama said he will veto a bill on more sanctions against Iran if it comes to his desk while negotiations are continuing between Tehran and six world powers.

But Obama said if Iran ultimately refuses to "say yes" and provide assurance that they are not secretly developing nuclear weapons, he would go to the U.S. Congress and ask them to "tighten the screws."

Speaking at a joint press conference at the White House with British Prime Minister David Cameron, Obama said there is probably less than a 50 percent chance of a diplomatic deal with Iran.

Iran is in talks with the so-called P5+1 group of nations — China, France, Russia, the United Kingdom, and the United States, plus Germany — aimed at limiting Tehran's nuclear program in exchange for an easing of international sanctions.

Iran denies that it is attempting to build nuclear weapons.

Based on reporting by Radio Farda's Hannah Kaviani​

RT: “‘More sanctions on Iran would play against US’