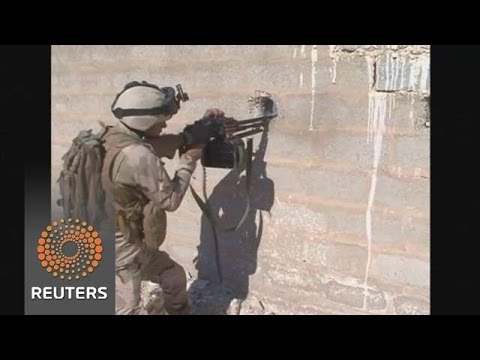 The past year in Iraq is not easy to review. The assorted crises, both in security and politics, are well known around the world and for many Iraqis it’s been one long nightmare. NIQASH went to gather ordinary Iraqis’ opinions on the year gone by and ended up speaking to one local whose life this year was a perfect metaphor for Iraq’s 2014.

There may well be no better local to tell the story of what happened in Iraq in 2014 than Soran Sharif. Sharif is 52 years old, he’s originally from Iraqi Kurdistan but has been living in Baghdad for the past 40 years and he works as a taxi driver. Every month he used to take Iraqis of all kinds, all around the country in his yellow, five-seater car. Sharif regularly meets Sunnis, Shiites, Kurds, Turkmen, Yazidis and Christians as he does his job – and he regularly drives them right around the country, from Baghdad to Basra to Erbil in the north.

Until this year, that is. “This year has been the worst year in the past decade,” Sharif says. “Our country was cursed this year and as a nation, we have become nothing more than a ghost of what we once were.”

“We still all hold Iraqi nationality. But we are no longer able to go to all parts of the country because of the nightmare that was 2014,” Sharif tells me.

I had meant to make Sharif just one of the interviews for this end-of-the-year story about Iraq. But after we spoke, I felt as though his story was the only one I needed to tell.

Sharif told me that he’s visited all 19 of Iraq’s provinces. “My job [as a driver] is really to connect Iraqis, to bring them closer,” Sharif describes his job poetically. “But politicians and terrorists have divided them.” Every day Sharif drives to different parts of the country. One day he might take engineers from Baghdad to work on Basra’s oilfields in the south. On his way back he will bring soldiers from Basra to their barracks in Baghdad. Another day he might take small business owners from Baghdad up to Erbil or Sulaymaniyah in the semi-autonomous region of Iraqi Kurdistan in the north. He will bring back Iraqi Kurdish locals who work in Baghdad.

Barely a month passes by without Sharif making some kind of a visit to almost all of Iraq’s biggest cities. This year that changed when parts of the country began to be controlled by extremists from the group known as the Islamic State, or IS. Now Sharif can no longer go to Salahaddin, Mosul, Diyala or Anbar. Additionally he can’t get to Iraqi Kurdistan easily any more because the main roads pass through extremist-controlled terrain.

At the beginning of 2014, the then-Iraqi Prime Minister Nouri al-Maliki decided to disperse protests organised by the country’s Sunni Muslims against his government. The dispersal was a violent process and started the chain of events that came to dominate Iraq’s political and cultural life during the year. In the ensuing chaos, Sunni Muslim tribes decided to take up arms against the Iraqi government and the IS group took advantage of the conflict to occupy the city of Fallujah in the province of Anbar. Fallujah is only around 40 kilometres away from the Iraqi capital, Baghdad.

On June 10 this year, the IS group managed to expand the terrain they controlled and they took over the cities of Mosul and Tikrit as well as large parts of the provinces of Diyala and Anbar. In most of these areas the Iraqi army simply collapsed. In terms of terrain the sites controlled by the IS group mostly lie between northern Iraq, where the major Iraqi Kurdish cities and towns are, and southern Iraq, where most of the towns and cities dominated by Iraq’s Shiite Muslim population are. The land routes between these two parts of the country have been blocked.

“I’ve met so many different kinds of Iraqis during my work,” Sharif says. “But when we used to discuss politics we were never violent, we were passionate but we were calm. And we often agreed on one thing: That politicians were behind our country’s problems.”

I asked Sharif if maybe, just maybe, his passengers were being polite when they spoke calmly and rationally. Perhaps deep inside, the Iraqis of different sects did actually despise one another.

Sharif wouldn’t agree with that. “No, no, we really love one another,” he argued. “I love the dates of Basra and I love to eat them with the famous Kurdish yoghurt,” he declared, as if this made all the sense in the world.

Sharif says nobody can compete with him for detailed knowledge of the country’s main roads and back streets, and all the different smaller villages and towns of Iraq. His stories about his customers are endless and they’re often associated with historic streets or landmarks.

With land routes blocked by fighting or too dangerous, Sharif and other drivers can now only take their passengers south.

Will things get better next year? I ask Sharif.

In April this year Iraq held general elections. These were some of the most difficult elections for years because of the competition between two fronts – those who supported former Prime Minister Nouri al-Maliki and everyone else who opposed him. Although al-Maliki’s coalition ostensibly managed to gather enough votes to remain in power, local, regional and international opposition to him continuing as Prime Minister was so strong, he was eventually forced out of the top job. His party remains in power and the country has a new Prime Minister from within it: Haider al-Abadi.

Al-Abadi seems to be doing his best to introduce reforms. He really does.

Yet still, many Iraqis would agree that 2014 was the worst year for their country since 2003, when a US-led invasion toppled former leader Saddam Hussein and eventually brought about civil war. In 2014 about a third of the country remains under the control of extremists and there are millions of displaced people as well as thousands dead. In each and every alleyway you will either find a soldier from the regular Iraqi army, a member of a Shiite Muslim militia or a militant from a Sunni Muslim faction.

Despite that though, Sharif remains optimistic. “I wish I could wake up on January 1 to find that the past year has just been a bad dream,” he says. “When I am once again able to drive through all of the provinces of Iraq then I will be certain that this new government is a good one.”