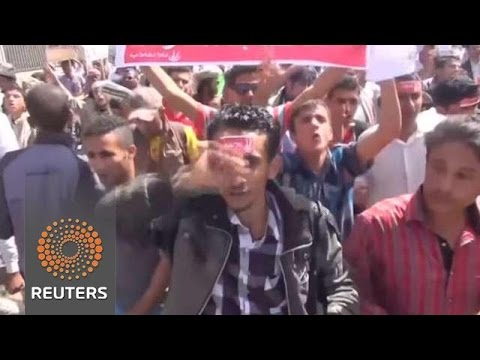 Yemen Voice reports that Wahhabi Saudi Arabia has launched an all out political offensive against the Shiite Houthi rebels who have taken over the north of the country. The Houthis took the capital last September but kept the government in place until recently, when they made a full coup and established a governing council. Saudi Arabia sees the Houthis as cat’s paws of Iran, but this point of view is a vast exaggeration.

Zaidi Shiites in Yemen, about a third of the population, do not belong to the same branch of Shiite Islam as most Iranians, and they are a local Yemeni movement reacting against Sunni and secular dominance of politics. (About two-thirds of Yemenis are Sunni Muslims and they predominate in the south of the country.)

President Abed Rabbo Mansour Hadi, elected in a referendum in February 2012, was forced to resign and was placed under house arrest. This weekend, Mansour Hadi escaped to the southern city of Aden, which is not in Houthi hands. In fact, several southern provinces have announced that they would not take orders from a Houthi government in the capital of Sanaa. The Houthis have subdued some nearby Sunni provinces by main force, but likely cannot forcibly take over the whole country. In the capital of Sanaa on Saturday, crowds demonstrated in favor of President Mansour Hadi.

Even before that happened, Yemen Voice alleges, Saudi Arabia’s new King Salman was trying to put together an anti-Houthi coalition. It would include the secular, nationalist General National Congress Party, which had ruled the country until last September, and its rival, the Islah (Reform) Party, a party of the religious right. Both have been sidelined by the tribal, rural Zaidi Shiites who flooded into the capital and have also taken other cities, including Ta’izz.

The Saudi-backed coalition also included Sunni tribal leaders in Maarib and Baida, oil-producing regions that are dead set against Shiite rule. One problem: some of the regions the Saudis are said to be encouraging to rise up against the Houthis have al-Qaeda cells, and if Yemen falls into civil war, they will reap the consequences.

Mansour Hadi has the support of provincial governors and their bureaucracies in the south, as well as of many in the public. Yemen has just been partitioned into a Shiite-dominated north and a Sunni-dominated south.

Meanwhile, the Yemeni economy continued its collapse, with oil revenues down in the past year by one billion dollars, to $1.6 billion instead of last year’s $2.6 billion. Political unrest and the destruction of pipelines was the major cause of the fall, though the lower oil prices of recent months have also hurt.

Saudi Arabian interference in the domestic affairs of the Zaidi Shiite north of Yemen is widely held to have produced the militant Zaid movement as a local phenomenon. It began clashing with the nationalist government (which was allied with the Saudis) in 2004. After the 2011 revolution, which removed a president for life, the state institutions were weakened, including the Army, allowing the Houthis to take over last fall.

The struggle in Yemen is now joined, with two fairly clear camps. One side is the nationalists of Mansour Hadi and possibly a new alliance between them and the Sunni fundamentalist Islah. The other is the Shiite Houthis. One has the south, the other the north. The future of Yemen depends on whether they go to open war or negotiate, and who ultimately wins.