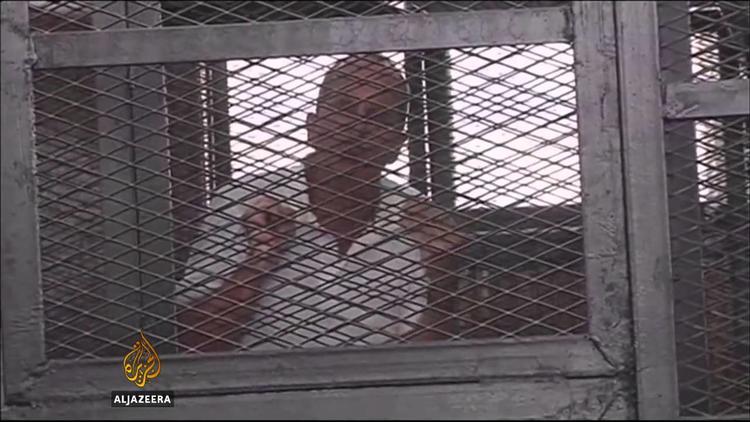 Peter Greste, an Australian journalist working for Aljazeera English, has been released from an Egyptian prison after a 400-day ordeal in which he was jailed merely for reporting the news. Greste was preemptively released by a presidential pardon from Abdel Fattah al-Sisi, the military dictator.

Nothing is more eloquent of the iniquity of the Egyptian ruling class and its entire inability to abide the most basic elements of democracy than this affront to journalists and proponents of free speech everywhere. If the Arab Spring ideals have crashed and burned in most of the countries where brave youth overthrew dictators for life, it is because the very forces that should have taken advantage of this opening– judges, politicians, and younger officers– decided instead to grab power and enrich themselves by putting the genie back in the bottle. Four years later, youth leaders like Ahmad Maher are in prison and the corrupt Mubaraks no longer are.

Greste’s colleagues, bureau chief Canadian-Egyptian Mohamed Fahmy and producer Baher Mohamed, remain in prison for the moment, though their conviction was overturned by an appeals court and they await a new trial. Mohamed Fahmy is rumored to have been stripped of his Egyptian citizenship so that he can be treated as a Canadian national and deported rather than imprisoned for the (false) charges against him. Stripping people of their citizenship is a serious violation of international human rights law. Ironically, hyper-nationalist Sisi-ruled Egypt is more or less admitting that it is better to have foreign citizenship than Egyptian if you want to be treated slightly less brutally.

But logic and evidence are lost on the Egyptian elite in general and the Egyptian judiciary in particular. And that is truly bad for Egypt’s future. Egypt and most Arab countries are economically backward in part because they suffer from large scale and endemic corruption and because their laws are mostly not worth the paper they are printed on and because the judges are (with important exceptions) often regime lackeys or highly biased or poorly trained. Direct Foreign Investment (DFI) is shockingly low in the Arab world and in Egypt, and it holds that country way back. If I were an investor with capital, I would not put it into a country where, if a legal dispute arose, I would go before the judges who railroaded Mr. Greste.

At his trial they showed a hodgepodge of video he had with him from his previous posting in Kenya and from vacation reels, and none of it was relevant in any way to the case. Yet he was initially convicted and spent over a year in an Egyptian jail. I think that is a fate any person would want to avoid in this lifetime. Egyptian jails are nasty and have ruined the health of political prisoners such as my own teacher Saad Eddin Ibrahim.

The kangaroo court that put Greste and his colleagues away, with its irrelevant “evidence,” reminds me of an old Marx brothers routine in “Duck Soup,” set in a courtroom with the brothers as attorney and defendant.

Prosecutor, outraged, leaps to his feet. “Your honor, that’s irrelevant!”

Chico is gleeful. “That’s a right!”

What actually happened was that massive protests broke out in Egypt in May-June of 2013, which brought millions of workers and youth and townspeople into the streets to protest the increasingly autocratic, incompetent and alarmingly theocratic rule of Muhammad Morsi of the Muslim Brotherhood, who was barely elected in a squeaker in 2012. Many Egyptians gave the Brotherhood a chance to behave like, say, the German Christian Democrats. Instead, they proved manipulative and grasping, more like a scheming cult aiming to grab power than a civil political party.

But what the masses in the streets said they wanted was a California-style recall election, and that is what should have been done.

Instead, Gen. Abdel Fattah al-Sisi, the Minister of Defense, took advantage of the vast popular unrest (these were the largest protest crowds in Egyptian history) to make a coup, taking Morsi and 2000 top Muslim Brotherhood leaders abruptly into custody (where most of them remain). When the Brotherhood faithful tried to mount weeks-long sit-in protests, the generals sent in the army and forcibly cleared them, killing several hundred with unnecessary brutality.

The Brotherhood, backer of a successful civil political party in 2011-2012, was late in 2013 abruptly declared a terrorist organization, dissolved, and had all its assets and those of its major leaders seized. It was driven underground. Tens of thousands were arrested for thought crimes.

Al-Sisi and the other generals knew they could only make their brutal coup stick if they could control information. That required them to discredit and disable Aljazeera’s satellite channel (the Arabic service of which admittedly did increasingly in this period become a partisan for the Muslim Brotherhood, rather as Fox Cable News is a partisan for the GOP). But Aljazeera English was more measured, and in any case an editorial line is not a crime.

The arrest of the three journalists was a bald attempt to blackmail Aljazeera into backing off any editorial support for Morsi and into avoiding really scathing coverage of al-Sisi and his coup. At home in Egypt, most editors and journalists meekly fell into line and engaged in extensive self-censorship. Egypt’s brief experiment with a freer press was decisively ended and most of the newspapers and television news magazines now have all the cutting edge of a bowl of porridge.

The blackmail worked. Aljazeera agreed to roll up its fourth channel, devoted to covering Egypt’s military regime critically, ‘Aljazeera Mubasher,’ this fall. Under Saudi and Egyptian pressure, the Qatar government appears to have asked some Muslim Brothers to leave the country and gave assurances it would not forcefully back the Brotherhood in Egyptian and other politics (though it is not clear that this pledge was more than a set of polite intimations).

Saudi Arabia, Kuwait and the United Arab Emirates have decided that if the Muslim Brotherhood could take over Egypt, it could take over their countries. It is seen as populist, popular, conniving, and ambitious– rather as the Communist Party was viewed by the American Cold Warriors. The Gulf states have colluded with the Egyptian officer corps to try to crush the organization by stigmatizing it as terrorist, even though it foreswore violence decades ago.

Everyone knew that there was no Marriott Cell and knew that Peter Greste was not plotting a counter-coup on behalf of Morsi. The arrest of the three journalists was a kidnapping for blackmail, no different in kind from what some unsavory groups do in the Middle East that are not formal governments.

It is only to be hoped that al-Sisi hasn’t released Greste merely in order to get the West off his back, in hopes he can keep other hostages for further leverage on Qatar and Aljazeera (and as an object lesson to journalists who dare criticize the new “elected” dictator; in real presidential campaigns, rival candidates are not intimidated into declining to run and the incumbent doesn’t win 87%).

But it is undeniably good news that Mr. Greste is finally free after his long Kafka-esque misadventure.

They say Egyptian tourism is back up. I can’t imagine why. One might as well go sun-bathing in North Korea.