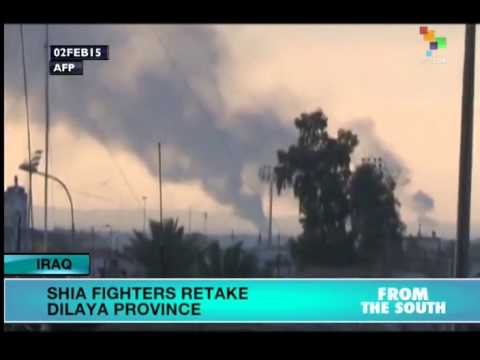 In Latifiyya, a small town 20 miles south of Baghdad, fighting has been raging since long before the armed conflict that erupted when the Islamic State (also known as ISIS) took over Mosul. For at least two years state security forces and government-backed militias have been battling Sunni insurgents here, and also targeting Sunni civilians.

Between the Sunni and Shia extremists, an influential Sunni sheikh believed he could help save his people from both sides. He urged the Sunni majority in Latifiyya not to back ISIS, no matter how many relatives were murdered by Shia militias.

In October Sheikh Qassem al-Janabi invited Human Rights Watch researchers to his compound, an informal community meeting place, so that we could interview local residents about militia killings and other unlawful attacks. Violence and danger surrounds the area and, from inside the compound, we could hear mortar fire and explosions. But at least here residents could tell us their stories in relative safety. We listened to heartbroken men and women tell of their murdered sons, brothers and husbands; one showed us images of his son, perhaps 18, wearing a soccer uniform in one picture, bullet-ridden in another.

One image is seared in my mind from that day: the shy but resolute expression on the face of Qassem’s son, Mohammed, back from completing a Master’s degree in the United Kingdom. “I’m scared to be back in Iraq,” he told me. “But I have to help my country.” We came away impressed by his demeanor, at once graceful and strong.

Yesterday, Qassem and Mohammed paid the ultimate price for their moderation. Their convoy was ambushed, allegedly by Shia militias, as they drove to Baghdad from Latifiyya. Their bodies were found on Friday night, dumped in a Shia neighborhood, a militia calling card.

At first I could not figure out why these killings so affected me. Bodies are found every day, dumped on the outskirts of Iraq’s capital. Every day people die in ISIS suicide and car bomb attacks. Iraq is torn at countless seams, its people in a constant state of mourning, whether Sunni or Shia. But I cannot stop thinking of Qassem pleading for us to get his people’s stories out.

For Sunnis opposed to ISIS, the message of his death is clear: extremists will still target and kill you even if you are a moderate, and no one can protect you.

I cannot write an appropriate tribute to all the Iraqis who have died trying to combat the sectarian atrocities ripping Iraq apart. Perhaps the best homage to Qassem and those like him is to support what appear to be sincere government efforts to hold those responsible to account. Prime Minister Hayder al-Abadi has ordered an investigation into the murder of Qassem and his son, as he did into the massacre of 72 civilians in Barwana last month. The United States and other allies should support efforts to rein in abuses, to build strong and impartial institutions, and to condemn militia brutality as they do other atrocities. These contributions are as important for Iraq’s long-term stability as any military effort.