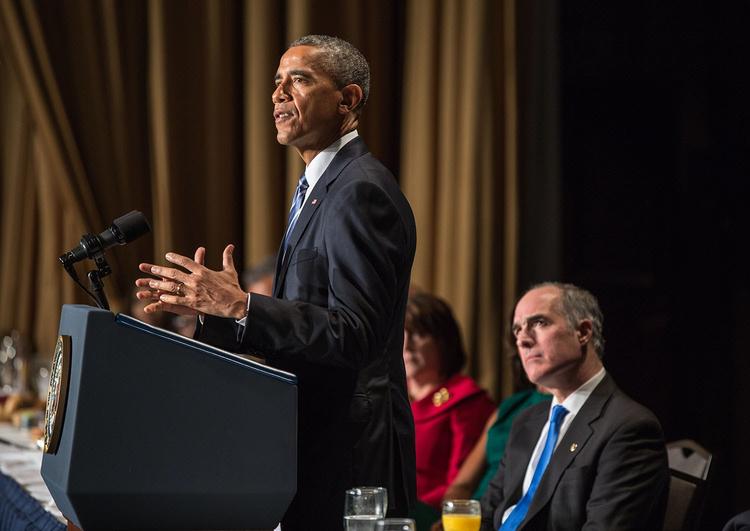 President Obama, speaking on Thursday at the National Prayer Breakfast, condemned religious extremism in the Muslim world, noting that it is the work of twisted individuals rather than being intrinsic to the religion. He then added,

It is actually amazing that Southern Christianity does not get called out more often for its role in slavery and racial discrimination in the United States, especially since its churches are still for the most part segregated! I mean, don’t people know why there is a Southern Baptist denomination in the first place? Why not just “Baptist?” The US History website notes:

“Defenders of slavery noted that in the Bible, Abraham had slaves. They point to the Ten Commandments, noting that “Thou shalt not covet thy neighbor’s house, … nor his manservant, nor his maidservant.” In the New Testament, Paul returned a runaway slave, Philemon, to his master, and, although slavery was widespread throughout the Roman world, Jesus never spoke out against it.”

The southern Christian churches conducted something like a genocide against the slaves. British North America and then the USA kidnapped and enslaved about 500,000 persons from 1600 to 1808. In addition, the North American slavers killed off about 200,000 Africans trying to capture people in Africa or let them die in the unsanitary holds of the Middle Passage across the Atlantic. Once they were on the plantations, the slaves were often worked to death; in 1830-1860 only 10 percent were over 50 years old. Their children were kidnapped from them and sold. Women and men who formed common law unions were separated and sold. Ten to 20 percent of what became over time 4 million slaves had been Muslim but their religion was stolen from them and they were forcibly converted to Christianity. Southern Christian seminaries produced an endless stream of theological writing upholding all these criminal acts. It was done very much in the name of the Bible.

Other Christians worked for abolition, so all this support for enslavement was not intrinsic to Christianity; it was a matter of a particular interpretation of Christianity. Slavery was widespread in the world, but Southern American plantation slavery was called the ‘peculiar institution’ for a reason– much slavery elsewhere was household slavery, as in most of the Muslim world. It was no fun to be someone’s property in a household either, but plantations (and this was true of Brazilian plantations as well) were particularly deadly, often killing the workers by age 40.

As for Jim Crow, the American version of South Africa’s Apartheid wherein African-Americans could not so much as drink from the same fountain as whites, Colin Chapell writes of Carolyn Renée Dupont’s Mississippi Praying:

“Dupont demonstrates that defenders of Mississippi’s segregated society turned early and often to evangelical theology in order to justify their views on race . . . her work unequivocally shows the religious commitment to segregation among white evangelicals. The white evangelical commitment to individualistic theology also led the way for an understanding of the world in which the disadvantages facing African Americans in the South were a result of their own failings rather than any structural stumbling blocks.”

On the order of 2 to 3 African-Americans were lynched every week under Jim Crow segregation, or up to 12,000 or so wantonly murdered by Christians during these 80 years.

But Obama could have mentioned other modern Christian atrocities. Christians often blame Christian violence on secular nationalism so as to dissociate themselves from the some 100 million persons mown down by those of white Christian heritage from Europe and the US in the 20th century. But many of those millions were killed by believing Christians on behalf of explicitly Christian states. I figure that Muslims killed about 2-3 million in the same period, though again, many of those were killed for secular nationalist purposes, not Islam per se.

Take Croatian Catholic nationalism in the 1930s and 1940s. It gave rise to the Ustashe movement. . (In the former Yugoslavia, Croats are largely Catholic, Bosnians mostly Muslim and Serbs for the most part Eastern Orthodox). If Ustashe had merely been a form of secular nationalism, it would not have demanded that Serbs convert to Catholicism from Eastern Orthodoxy, which it did. It was a sectarian Christian movement, not a secular one. Catholicism was just deeply intertwined with Croation identity. Ustashe killed 30,000 Jews, 40,000 Roma and about 500,000 Serbs (hint: Yugoslavia was not very populous– these are massive numbers). While the Catholic Church in Croatia was deeply divided on the movement, many in the lower level clergy actively supported it, and [pdf] and Franciscans provided some of the more enthusiastic executioners in the camps.

Or in Spain in the 1930s, the Catholic Church was closely allied with Gen. Francisco Franco and declared the struggle against the Spanish left in the civil war a “Crusade.” Franco’s Crusade against the Left probably left on the order of 200,000 dead (some historians say twice that). These 200,000 individuals were killed (yes, Rush Limbaugh and Michelle Malkin) in the name of Christ.

I don’t mean to pick on the poor Catholics. The Dutch Reformed Church was not innocent in the imperial wars in what is now Indonesia nor in the Afrikaners’ Apartheid. There is plenty of killing in the name of Christ to go around.

The outrage on the right about Obama’s entirely correct observations derives from a kind of Christian nationalism, in which Christians can do no wrong or are not responsible for the wrongs done by other Christians. The point is, that may be so, but neither are Muslims responsible for the loonier of their coreligionists. Those complaining about a “false equivalency” are just using a meaningless buzzword. Here’s a better one: what’s sauce for the goose is sauce for the gander.