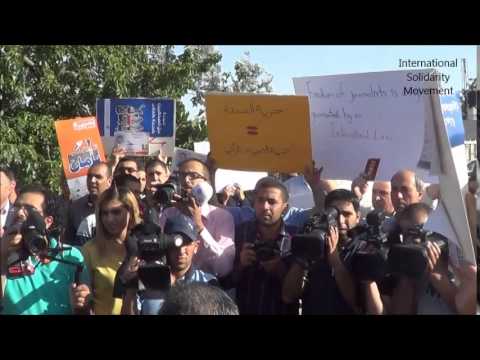 Israeli forces committed a total of 351 violations of press freedoms, 112 of which were recorded in Gaza and 239 in the West Bank.

Based on the figures, Israeli violations increased by 132 percent compared to 2013, while violations by Palestinian security forces in both Gaza and the West Bank increased by 46 percent.

According to MADA’s report, violations by Palestinian security forces in 2014 were at their highest since 2008.

“This increase in violations especially in the West Bank was monitored after the signing of the last reconciliation agreement between Fatah and Hamas last April, while it was suppose to result in a breakthrough in the status of public freedoms, including media freedoms and freedom of expression.”

The group noted that the circulation of newspapers affiliated with both Fatah and Hamas has improved in Gaza and the West Bank since the unity deal.

The main forms of media violations by Palestinian security forces are assaults, threats, arrests and being summoned for investigation, the group said.

MADA said it condemns all violations of media freedoms in Palestine, above all the killing of 17 journalists during the 50-day Gaza war in July-August, including that of an Italian photographer working for Associated Press.