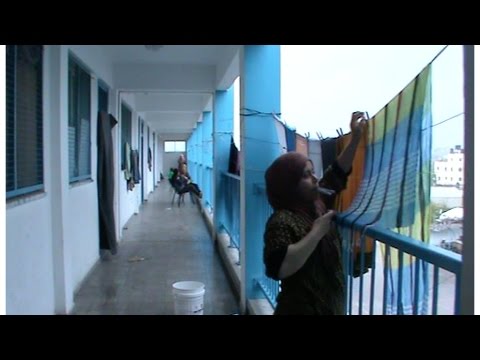 BETHLEHEM (Ma’an) — The unprecedented number of Palestinians killed in the 2014 war in Gaza was linked to changes in the military rules of engagement regarding civilian protection measures by Israel’s army, a London-based NGO said this week.

In a new report entitled ‘Under Fire,’ Action on Armed Violence found that Israel has “gradually relaxed” rules regarding the use of unguided high-explosive weapons in populated areas, greatly increasing the risk to Palestinian civilians.

“Despite a stated commitment by the IDF to civilian protection, and much advertised measures such as pre-strike warnings, when it comes to the use of Israeli artillery on Palestinians there is a wide gap between public rhetoric and the reality on the ground,” the report said.

Over 2,100 Palestinians were killed in the 51-day conflict and 10,000 injured, with 69 percent of the fatalities civilians and at least 501 children, according to the United Nations.

Seventy-one Israelis, the majority soldiers, were also killed during fighting.

Robert Perkins, a senior researcher at AOAV and author of the report, told Ma’an that among the key findings of the study was the increased use of explosive weapons — notably 155 mm artillery shells — on populated civilians areas in the Gaza Strip.

In the 2014 war, Israel launched 34,000 unguided shells into Gaza, including 19,000 high-explosive artillery shells, the highest use of such weaponry since the 2006 war in Lebanon eight years ago, the report said.

The number of shells fired into Gaza last summer represents a 533 percent increase in the use of artillery explosives compared to Operation Cast Lead, averaging around 680 shells landing in the Gaza Strip each day of the conflict.

Each 155 mm shell has a “kill radius” of 150 meters from the point of detonation and a secondary “injury radius” of 300 meters, with over 2,000 jagged metal fragments projected from each blast.

An Israeli army artillery expert interviewed by AOAV noted that during the conflict soldiers would routinely fire up to three of four shells for each individual target due to the inaccuracy of the weapon, with a “hit” officially recognized if a shell lands within 50 yards of the target.

A senior Israeli official told AOAV that the cost of ammunition used in Operation Protective Edge amounted to over $300 million, in part because “troops fired more ammunition than was planned.”

During heavy shelling of the al-Shujaiyeh neighborhood — after Israeli ground forces came under attack and 13 were killed — over 600 artillery shells were fired into the densely populated neighborhood, killing at least 65 civilians as bodies were pulled from the rubble for days afterwards.

“Errors occur with this type of shell, it is fundamental to the way it works, but there is no margin for error in Gaza because you will hit markets, houses, and civilians, and that is what happened,” Perkins said.

Iain Overton, AOAV’s Director of Policy said that the unguided artillery shells are a “relic of a bygone day,” yet the report found that Israel’s army is more reliant on them now than they were 10 years ago.

Despite being inherently inaccurate and requiring particularly strict guidelines on their use, artillery shells were fired in unprecedented numbers during the conflict in Gaza.

Unlike tanks, which fire down a direct line of sight, artillery shells are fired in high arches from as far as 18 kilometers away based on coordinates given by observers, with operators technically unable to see the target.

As an army conscripted from the civilian population, Israel’s military is under added public pressure to prevent fatalities, and artillery fire is one strategy to minimize the risk of death for their soldiers.

The tactic, however, had a devastating impact on Palestinians in Gaza, as the “deployment of heavy unguided artillery shells, or the dropping of bombs with a large explosive yield, in populated areas puts civilians at great risk of unintended death or injury.”

In addition to the frequency and quantity of use, safety zones to limit the damage of artillery shells were woefully lacking.

The safety distance for firing artillery shells near civilian infrastructure was reduced from 300 to 100 meters in 2006, and AOAV says there was no evidence to suggest it was increased again during the 2014 war.

In one of the most high profile cases of indiscriminate shelling during the conflict, at least 21 Palestinians were killed as they sheltered in a UN school in Jabaliya on July 30.

A preliminary review by the UN found that shrapnel at the site most likely came from 155 mm artillery shells fired from units positioned northeast of Gaza’s border.

Israel’s army said it was responding to alleged militant fire from the area, highlighting the inaccuracy inherent to the artillery shells.

In 46 separate incidents of shelling recorded by AOAV in Gaza, over 94 percent were in or near a populated civilian area.

“These are weapons which by the way they work inherently affect a large area. They can’t be targeted to hit one person in a crowd and no one else. It is always civilians who bear the brunt when these weapons are used,” Perkins says.

Military experts say that even specifically designated “precision weapons” utilizing the best target planning have a 5-10 percent possibility of hitting the wrong target in an urban environment.

Given the density of Gaza’s infrastructure it is almost certain that unguided shells fired at distance into civilian populated areas will result in high fatalities.

AOAV called for an immediate end to heavy unguided artillery in populated areas, binding national legislation to enforce it, and full cooperation from Israel in external investigations into the conduct of its military during the war.

“All armed actors should end the use of these weapons in highly populated areas,” Perkins said. “All of these shells have to fall somewhere, and the current rules are not strong enough to protect civilians.”