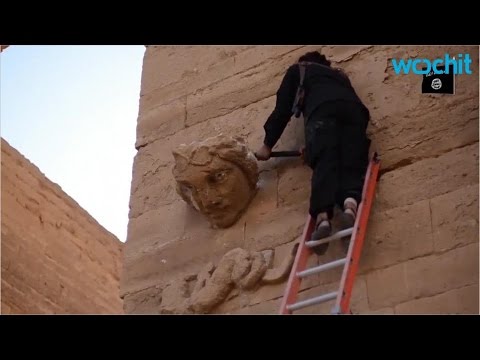 While much of the world stands by as the militant Islamic State group takes a sledgehammer to the Middle East’s cultural legacy, a team of Czech scholars is working feverishly to try and save one Iraqi town’s architectural heritage.

All across the large swaths of Syria and Iraq that IS controls, many monuments, buildings, and works of art have been destroyed by the extremist group on the grounds that they were “idolatrous.”

Nowhere is this more apparent than in Mosul, where much of its architectural legacy has already been obliterated by IS as it seeks to remold the northern Iraqi city in its own image.

“Unfortunately, the Islamic State’s actions have all the hallmarks of systematic destruction [in Mosul],” says Karel Novacek from the University of West Bohemia, who is part of the Czech archaeological mission to northern Iraq. “It seems like a targeted attack on the town’s historical memory, its roots, and traditions — everything that connects Mosul’s inhabitants with their past.”

Novacek has become so concerned with the “cultural genocide” that he and some other Czech archaeologists have decided to do something about it.

In conjunction with the Oriental Institute of the Czech Academy of Sciences, they have embarked on a project aimed at comprehensively mapping the impact of Islamic State’s activities in Mosul.

Using existing scholarly research, archive sources, photographs, reports from local people, and satellite imagery, Novacek and his colleagues have set about compiling as much data as they can on IS’s destructive efforts.

Novacek hopes to compile a comprehensive list of all the damage that has been done that could eventually be used by the Iraqi authorities and the international community as part of a coordinated effort to help preserve and restore what is left of the city’s architectural heritage.

Located on the Tigris, 400 kilometers from Baghdad, the city’s strategic location near many trade routes saw it develop rapidly in the Middle Ages as it became a meeting point for several civilizations and creeds, including Muslims, Christians, and Jews.

This cultural diversity was reflected in Mosul’s architecture, which gradually turned the city into a living museum of historic buildings that Novacek says “has no similar counterpart anywhere else in the world.”

Under the rule of Islamic State, unique structures such as the tomb of the Prophet Jonah and the ancient Mosque of Seth have now been reduced to rubble.

In February, Islamic State posted a video of militants gleefully smashing statues to dust in a Mosul museum.

From the information they have gleaned, the Czech academics fear that things in Mosul have gotten even worse.

“The town has taken a terrible hit,” says Novacek, who has ascertained that at least 36 of Mosul’s most important monuments have been destroyed. “A lot of [the damage] is irreversible. It is hard to find many historical examples where a city was so systematically deprived of its heritage. Monuments from the 12th-13th century have disappeared without trace and are irreplaceable. We don’t even have complete documentation about them. There are some photographs, but that’s about all we have. Unfortunately, in many cases the damage cannot be undone and these buildings can no longer be reconstituted in any way.”

Besides the destruction of many of the city’s rare archaeological structures, Novacek says there is also evidence that priceless artifacts and works of art have been plundered from Mosul’s museums and churches. He suggests that many of these will be sold on the black market to help finance IS.

However, the Czech scholars’ research has also shown that all may not be lost. Novacek is particularly hopeful about the Great Nur al-Din Mosque, whose leaning minaret is arguably Mosul’s most famous landmark.

“I am not sure about what can be saved, but it is interesting that Mosul’s most important mosque with the Al-Hadba minaret is still standing,” he says. “It’s a minaret from the 12th century, which is one of the most significant structures in Iraq. Apparently, it was prepared for destruction by Islamic State in July last year. However, according to reports, local people spontaneously occupied and surrounded it, thereby preventing it from being leveled. Allegedly, it is still primed for demolition, but the Islamic State ideologists are hesitating for some reason. This is very surprising because this structure is really a symbol of Iraq and even features on the country’s banknotes.”

“They have been damaged and looted, with their interiors destroyed and furnishings removed, but architecturally they are still standing,” Novacek says, adding that these buildings may still be razed, but that they seem to be a low priority for IS at the moment as the militants concentrate on purging Mosul of Muslim structures that don’t conform to their own vision of Islam.

According to Novacek, the final results of the Czech archaeologists’ work should be made available within a matter of months.

By that time, he hopes, Islamic State will have been driven from the city.

Nonetheless, he admits that Mosul will be changed utterly as a result of Islamic State’s actions, a tragedy compounded by the fact that most scholarly work on the medieval city is based on German research that was conducted before World War I.

As a result, modern archaeologists have relatively little information about many of Mosul’s ancient structures, and this is a shortcoming that sadly may never be rectified.

“We have never had adequate knowledge about many of these buildings,” says Novacek. “We are unable to say what it is we have lost exactly and to a large degree we’ll now probably never know.”