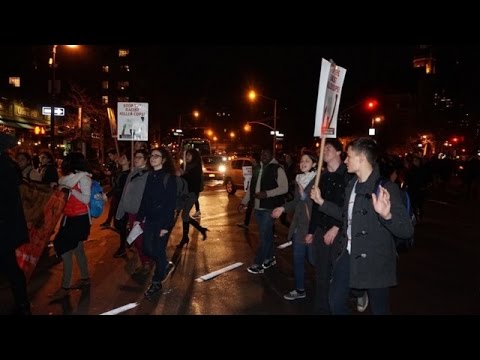 Demonstrators still seeking answers over the mysterious and troubling death of Freddie Gray, who died of a spinal injury while in the custody of the Baltimore Police Department, circled City Hall on Thursday after Maryland Governor Larry Hogan announced that he had called in state troopers to help quell the protests.

Anger seems to be reaching a boiling point. On Wednesday, the Baltimore Police Union issued a statement comparing the peaceful demonstrators to a “lynch mob”—the irony of which has only inflamed tensions.

RT has a live-stream of the growing demonstration.

“While we appreciate the right of our citizens to protest and applaud the fact that, to date, the protests have been peaceful, we are very concerned about the rhetoric of the protests,” the Baltimore Fraternal Order of Police Lodge 3 said in a statement.

“In fact,” the statement continues, “the images seen on television look and sound much like a lynch mob in that they are calling for the immediate imprisonment of these officers without them ever receiving the due process that is the constitutional right of every citizen, including law enforcement officers.”

Daily demonstrations have grown since Sunday, when news broke that Gray, a 27-year-old black man, had died from his injury a week after he was arrested. The protesters are seeking answers and accountability for a tragedy which is being compared with other recent incidents of police brutality against people of color.

During the Thursday protest, demonstrators raised their arms in the air in the “hands up don’t shoot” gesture that became a symbol of the uprisings that followed the killing of black teenager Michael Brown in Ferguson, Missouri last August.

Earlier in the day, Maryland State Police spokesman Sgt. Marc Black confirmed to the Baltimore Sun that 32 troopers “with expertise in crowd control” had arrived in Baltimore to “be in place for help whenever the Baltimore City Police department asks.”

Images from the protest is being shared online under the hashtag #FreddieGray.