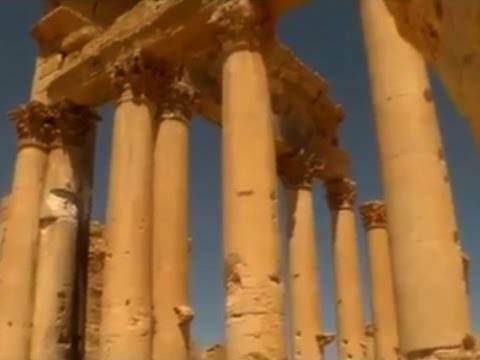 Nearly 500 people died in the campaign by Daesh (ISIL, ISIS) to take the Syrian city of Palmyra, including 49 who were executed before the fundamentalists reached the city center. On Thursday, they are alleged by the Syrian Observatory on Human Rights to have beheaded at least 17 more people, among them Syrian Arab Army POWs, pro-regime militiamen, and pro-regime civilians. The terrorist organization ordered the population of the city to remain in doors. The city of some 140,000 (many of them refugees from Homs and other urban centers damaged by the civil war) fell to Daesh on Wednesday, marking the second city conquered by the organization this week (Ramadi in Iraq fell to them on Sunday).

On Thursday, Daesh forces took two villages outside Palmyra on the road to Damascus, claiming to have killed 50 Syrian Arab Army troops who were attempt to flee to Homs.

For Syrians, Palmyra is famous not only for its historical ruins but more darkly as the site of the notorious Tadmor Prison, where Muslim fundamentalists were imprisoned, including for thought crimes, and torture was practiced intensively. The regime is said to have moved the prisoners to a secret location before the city fell.

Personally, I disagree with those analysts suggesting that Palmyra is a strategic asset or that its fall brings Daesh to the gates of Damascus. It is a small town out in the eastern desert away from the population centers along the western border of Syria. Two-thirds of Syrians live in the corridors linking Damascus to Latakia and Aleppo via Homs. Daesh isn’t all that much closer to Damascus than it was in southern Raqqa province already. Maybe having it improves the organization’s logistics with its assets in Iraq, but that is about it. Some observers are also claiming that Daesh now controls half of Syrian territory. But that is a silly way of counting things. The eastern desert is sparsely populated and it isn’t even clear what ‘controlling’ it would mean. The scorpions and lizards wave black banners? What Daesh controls is mostly white in the below ethnic map of Syria (i.e. unpopulated). 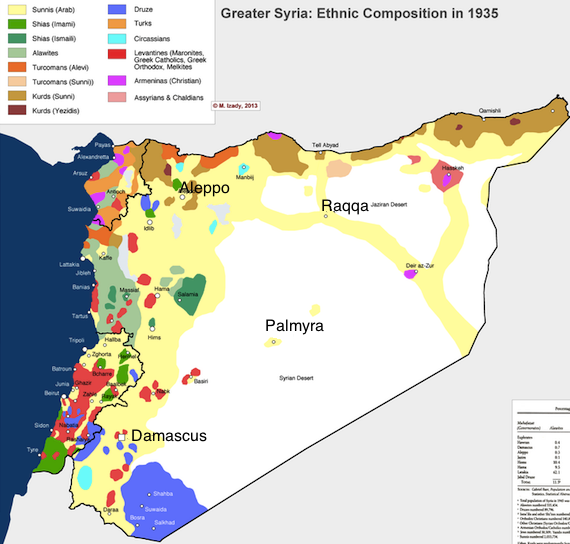 The more colorful spots are non-Sunni ethnic minorities like the Druze, Alawites, Christians, etc. However tired these groups might be of the war, they will go to Israeli-style mass citizen mobilization before they will accept being conquered by Daesh. That is, the al-Assad regime may well fall in the end, but the conquest of Palmyra by Daesh does not actually indicate that fall is imminent.

Many Syrians on Twitter are complaining that world leaders like President Francois Hollande of France are all of a sudden energized about Syria now that Palmyra has fallen to Daesh, because of the organization’s iconoclastic policies and the danger it will destroy the Roman ruins. They want to know where Hollande has been while over 200,000 Syrians were killed in the civil war.

The big question is how Daesh, supposedly being bombed by coalition aircraft, was allowed to send out a substantial convoy down desert roads to Palmyra from Raqqa. The Pentagon has been issuing statistics on so many bombing raids etc. for months, but unless the bombing is degrading Daesh’s capabilities then it is a waste of taxpayer money. In Kobane, the bombing succeeded in keeping the city out of Daesh hands because Kurdish Marxist guerrillas also fought it on the ground. But the US can hardly give the genocidal al-Assad regime close air support. Without a ground force to support, the US bombing is merely symbolic.

The situation is different in Iraq, where US and coalition bombing raids have helped push Daesh back in Diyala, Salahuddin and Ninewa Provinces, in conjunction with ground operations by Kurdish Peshmerga or the Iraqi army and its Shiite paramilitaries. In that context, the fall of Ramadi was probably preventable with the right coordination. In Syria, I don’t see the US aerial intervention as so far having been consequential.

Associated Press: ” Ancient City of Palmyra Falls to IS Militants”