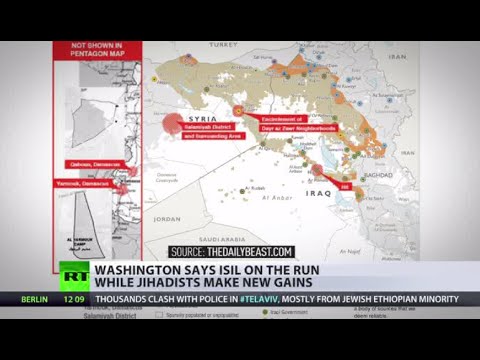 Refugees from Ramadi trying to escape the city and extremists.

Last week’s small extremist victories in Ramadi were fuelled by the work of sleeper cells, who spread rumours and panic that saw security forces abandoning the city and locals fleeing for Baghdad. But those worst fears were never really realised.  And locals think it was all part of a cunning strategy.

It has been almost two weeks since fierce fighting started around the Iraqi city of Ramadi in the province of Anbar. The Iraqi military began operations to expel fighters from the extremist group known as the Islamic State from the province around then but while they’ve made some gains, they also found that one of the two large cities in Anbar they still controlled came under attack.

In fact the extremist Islamic State, or IS, group had already made moves on Ramadi even before the government announced its new offensive and after a surprise attack, they had managed to take control of areas in the north and the west of the city. And their tactics give an insight into how the extremist fighters are using clever tactics as well as sleeper cells; it may also give an insight into why there is ever increasing distrust between Iraqis from different sects.

This surprise attack by the group, which bases its ideology on its own version of Sunni Islam, began with an attack on the barracks housing irregular Shiite Muslim militias in the Sajariyah area; the militias are mostly made up of volunteers. A few hours beforehand though, some residents of the area began roaming the streets nearby, shouting that the extremist group was coming and that they had a lot of fighters and weapons.

As a result the forces there abandoned their barracks and withdrew from the area. The Washington Post reported that almost 5,000 local policemen also fled Ramadi, leaving just a thousand troops to defend the city. One of them told the newspaper he just wanted to make sure his family was safe.

“The Shiite factions thought that there was an army coming to attack them even though later on they realised that the force coming towards them was actually a lot smaller,” Mohammed Daoudi, a captain in the regular Iraqi army, told NIQASH. “It quickly became clear that the locals in Sajariyah were intentionally spreading false rumours and sewing panic. They must have been affiliated with the IS group, part of what can only be described as sleeper cells.”

There were reports of the same thing apparently happening in other parts of the city, including the Bufarraj, Bueitha and Tamim. The subterfuge also caused many local people in those areas to leave as quickly as they could and try to make their way to the relative safety of Baghdad.

The rumours that caused the panic implied that a huge IS group force was on its way that would be able to occupy the territory in a matter of hours. In fact, almost two weeks have gone by and while fighting is ongoing, nothing like this has happened; in fact, some of the areas are still unaffected and remain under the control of either the Iraqi military or local tribal forces.

“The sleeper cells deceived us,” Salman Mohammedi tells NIQASH; he left the Tamim area where he lives with his family as quickly as he could and he’s now living on the outskirts of Baghdad. “They spread rumours about how quickly the IS fighters were advancing and they also spread rumours about how the IS group would kill us all. That’s why we left so quickly.”

“It was a clever lie,” Mohammedi admits. “Panic and fear just grew. But I know that the IS group hasn’t even been able to occupy our neighbourhood!”

In fact some of those who fled their homes have decided to return. They prefer to be at home rather than living in a tent with no power or running water and they’ve been buoyed by a number of victories achieved by Iraqi government forces this week.

The psychological battle in Ramadi has actually been a long one. Although the IS group have managed to occupy a lot of Anbar province – it has a mostly Sunni Muslim population and the group has formed alliances here among anti-government groups – they’ve never managed to take Ramadi. An alliance between the Iraqi military and a number of the city’s tribes has meant the IS group was unable to enter. Many locals believe that’s why the extremists resorted to trickery here.

The IS group has it’s own intelligence apparatus. It consists of locals – civilians – who have normal jobs. Some of them may even be members of the army or police. Their job is to gather information about the areas they live in: things like the number of troops there, how many checkpoints there are and where members of the local security forces live. They are also supposed to spread rumours and disinformation among their neighbours, sewing both fear and panic as well anger and distrust toward the Iraqi government and military.

Once the IS fighters have succeeded in occupying a city, the sleeper cells come into their own. They become the IS-sponsored administrators of the city. Some of this kind of strategic planning was recently outlined in the German news magazine, Der Spiegel.

An Iraqi intelligence officer, who asked to remain anonymous, told NIQASH that security forces had learned several things thanks to interrogations of IS fighters they’d captured.

“There are three kinds of sleeper cells,” the officer explained. “The first category are not active. The second is composed of individuals who are supposed to infiltrate the local police and military and we believe that some of them are high ranking officers. And the third category is for those whose primary mission is to spread rumours and disinformation.”

Government intelligence agencies believe that there are around 5,000 members of the IS group in Baghdad right now but that it is almost impossible to identify them. According to the officer, the spies receive money from the IS group.

“There are lists of payments and salaries that are with the highest commanders in the IS group,” he says. “But the spies are all given nicknames so even if we do manage to get these lists, it would be very hard to identify the spies.”

This kind of information is part of what causes ever-increasing distrust between the different components of Iraqi society. Humanitarian organisations suggest that around 90,000 people fled Ramadi for Baghdad. However many have not been able to enter Baghdad because in order to do so, they must be sponsored by someone already inside the city. The security forces say they also need proof of an address before the displaced families can enter, in case extremist fighters are coming to Baghdad from elsewhere in Iraq, sneaking in among the displaced. And many Anbaris are still considered security risks for the reasons above.

It seems as though the Iraqi government doesn’t really have too many effective solutions for the sleeper cells here. One suggestion would be the building of closer alliances with local Sunnis so they can monitor their own people – however at the moment, the government still seems to believe that the only solution is military.