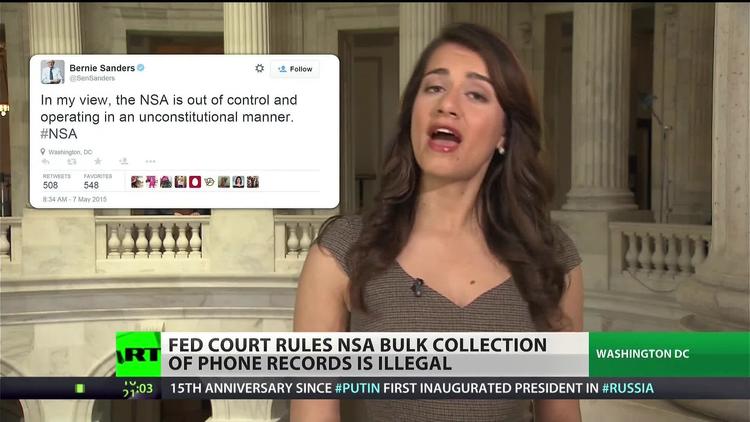 We now have the first decision from a court of appeals on the NSA’s mass surveillance program involving bulk collection of telephone records under Section 215 of the Patriot Act, and it’s a doozy. The U.S. Court of Appeals for the Second Circuit issued an opinion in ACLU v. Clapper holding that the NSA’s telephone records program went far beyond what Congress authorized when it passed Section 215 of the Patriot Act in 2001. The court completely rejected the government’s secret reinterpretation of Section 215 that has served as the basis for the telephone records collection program. EFF filed amicus briefs in this case in both the district and circuit courts, and we congratulate our colleagues at the ACLU on this significant victory.

The Second Circuit’s opinion stands as a clear sign that the courts are ready to step in and rule that mass surveillance is illegal. As we’ll discuss in a future post, it also marks a significant change in the context of the ongoing legislative debate in Congress about these issues. Above all, it is clear that Congress must do more to rein in dragnet surveillance by the NSA.

Relevance Means What You Think It Means

The public first learned that the NSA was collecting millions of Americans’ phone records on a daily basis back in 2006. However, it wasn’t until June 5, 2013, when the Guardian published a secret document disclosed by former NSA contractor Edward Snowden, that we learned the government’s full legal justification for the program. That document was an order from the secretive Foreign Intelligence Surveillance Court (FISC) directing Verizon to turn over the private calling records of ordinary people in bulk pursuant to Section 215.

Shortly afterward, the ACLU filed suit to stop the program, arguing both that it violated the First and Fourth Amendments, and the statute itself did not authorize the NSA’s program. In December 2013, the district court ruled for the government on all of these claims.

On appeal, the Second Circuit agreed with the ACLU that the government’s formerly secret interpretation of the law is wrong. Rather, the text of the law provides no clue to the massive programs the government claims it secretly authorizes. The Second Circuit court pointed out that the language of Section 215 only allows the government to get “an order requiring the production of any tangible things” if it provides “a statement of facts showing that . . . the tangible things sought are relevant to an authorized investigation.”

But, the court reasoned, a decade-long program of dragnet surveillance involving the bulk collection of millions of Americans’ telephone records simply can’t be “relevant to an authorized investigation.” The court explained it this way:

The government takes the position that the metadata collected—a vast amount of which does not contain directly “relevant” information, as the government concedes—are nevertheless “relevant” because they may allow the NSA, at some unknown time in the future, utilizing its ability to sift through the trove of irrelevant data it has collected up to that point, to identify information that is relevant. We agree with appellants that such an expansive concept of “relevance” is unprecedented and unwarranted.

The court also found that other language in Section 215 proved the government’s arguments wrong. Section 215 also links the scope of the orders it authorizes to that of grand jury subpoenas. The court explained that the orders to telecommunications providers “extend to every record that exists, and indeed to records that do not yet exist,” and there has never been a grand jury subpoena like that.

In the Second Circuit’s view, such an unprecedented expansion of the concept of relevance would require significant public debate. That simply didn’t happen with Section 215—despite the fact that Congress has (somewhat blindly) renewed Section 215 seven times. As the Supreme Court charmingly put it, Congress does not “hide elephants in mouseholes.”

There are a number of other important elements in the opinion, in particular the discussion of the ACLU’s standing to pursue its claims. Standing is a legal term of art that refers to the right to sue. In legal challenges to mass surveillance, the government routinely argues that even if it is collecting the contents and/or metadata of individuals’ communications, these individuals do not have standing to challenge the government’s actions because they are not harmed by mere collection, as opposed to government search or review of the records.

The Second Circuit’s opinion demolishes this argument on a number of grounds.

First, the court explained that collection of an entity’s metadata alone is enough to confer standing because the ACLU’s records “(among numerous others) have been targeted for seizure by the government.” That’s right—collect and seize mean pretty much the same thing. EFF similarly argued in its Jewel v. NSA lawsuit that the government commits a Fourth Amendment seizure when it collects communications directly from the Internet backbone.

Second, the court held that when the NSA queries its database of these seized phone records—including the ACLU’s—it “searches” them, thus conferring Fourth Amendment standing. The fact that such a search is done by computers doesn’t matter—an argument we also made in Jewel.

Third, the court held that the ACLU has standing to challenge the NSA’s program on First Amendment grounds because when the ACLU’s metadata is collected, its “members’ interests in keeping their associations and contacts private are implicated,” creating a chilling effect. This is similar to the theory in EFF’s First Unitarian Church of LA v. NSA lawsuit, in which 24 non-profit groups are challenging the NSA’s collection on First Amendment grounds.

Also noteworthy is the Second Circuit’s rejection of the government’s line when defending the program that “it’s just metadata.” Drawing on an expert declaration from Professor Ed Felten, buttressed by EFF’s amicus brief on behalf of 17 computer science experts, the court explained that metadata is often a proxy for the content of the communication, and that phone records can “reveal a startling amount of detailed information” about callers. Closely tracking arguments made by EFF in its amicus brief, as well as our arguments in Smith v. Obama and Klayman v. Obama, the court also recognized that aggregation of calling records matters because collection of large amounts of metadata plus the application of sophisticated data processing technologies gives the government access to even more revealing portraits of individuals and groups. The court also noted that there’s very little anyone can do to avoid generating this information.

What About the Constitution?

Chief among these vexing issues is the so-called third-party doctrine. Just this week, the Eleventh Circuit issued a disappointing decision holding that the third-party doctrine eliminates cell phone users’ Fourth Amendment rights in historical cell phone location information. The doctrine is before the courts in Smith v. Obama, the Fourth Amendment challenge currently before the Ninth Circuit in which EFF and the ACLU are co-counsel, and Klayman v. Obama, currently under submission in the D.C. Circuit, in which EFF argued as amicus. Hopefully those courts will pick up on the Second Circuit’s “constitutional concerns” and hold that the third-party doctrine does not shield the phone records dragnet. We’d like to see similar rulings in our other cases that involve phone records collection, including Jewel, First Unitarian, and Human Rights Watch v. DEA.

The Problem with Secret Law and Secret Courts

Both the Second Circuit panel opinion and a concurrence submitted by Judge Sack emphasized that the NSA’s faulty interpretation of Section 215 was even more galling because it was “shrouded in secrecy” having been approved by only a one-sided, secret court, the Foreign Intelligence Surveillance Court.

Shining a light on the FISC has been central in EFF’s legislative efforts to reform the intelligence community. This ruling affects that legislative landscape, which we’ll discuss in a future post.

The ACLU v. Clapper opinion marks a breath of fresh air, not only in bringing notable sensibility to interpreting the statute but also in dealing directly with the special problems caused by both the changes in technology we use and the shift to mass collection, aggregation, and analysis.