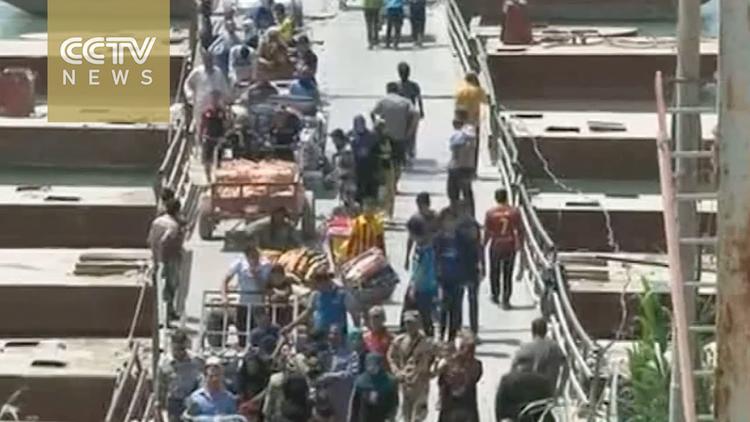 (Beirut) – Iraqi authorities are preventing thousands of families fleeing the fighting in Ramadi from reaching safer parts of the country. The government of Iraq has primary responsibility for protecting internally displaced people and should allow those fleeing danger in Ramadi or elsewhere to enter safer areas.

Since April 2015, the government has imposed restrictions on entry into Baghdad and Babylon provinces affecting just under 200,000 people fleeing fighting between the extremist armed group Islamic State (also known as ISIS) and government and tribal forces in Ramadi, capital of the majority Sunni Anbar province. Kurdish authorities are also imposing restrictions on people trying to enter by land areas under their control. By requiring those who enter to have local guarantors, the restrictions in practice discriminate against Sunni Arabs. Thousands of people remain stranded in Anbar province putting them at risk should there be a further advance by ISIS. In addition, Sunnis in Baghdad have reported attacks and threats against them.

“International law prohibits ethnic and religious discrimination even in times of conflict,” said Joe Stork, deputy Middle East and North Africa director. “Prime Minister Abadi should immediately order these restrictions lifted so that all Iraqis can seek refuge in Baghdad, regardless of origin or religious affiliation.”

The provincial authorities only allow displaced people to enter if they can present a local resident as a guarantor, or sponsor, at the entry checkpoints, an Anbar Provincial Council member, Sabah Karhout, told the media.

Two displaced people fleeing Ramadi said that the security forces at a checkpoint told them the restrictions were “to protect Baghdad” from ISIS fighters infiltrating the capital to carry out car bombings. The authorities can individually question suspected ISIS operatives at checkpoints and should not impose a generalized ban, Human Rights Watch said.

One guarantor, who has to personally come to the entry crossing, can vouch for up to four families, the security forces told them. One showed Human Rights Watch a copy of a guarantee – a post-it sticker with a faded Iraqi Army stamp, the handwritten name of the head of the family entering, the number of accompanying family members, and a signature by an army officer, but not the name of the guarantor, which is entered into an electronic database.

People displaced from Ramadi in mid-April told Human Rights Watch that they got no further than the bridge over the Euphrates River at Buzaibiz, 80 kilometers southeast of Ramadi on the border between Anbar and Baghdad provinces. The bridge is currently open for only an hour a day, Manaf al-Ma’ani, an Anbar provincial council member, told Human Rights Watch by telephone from Erbil, adding that hundreds remain stranded.

One father of two children, who had sent his family out of Anbar months before, said he slipped through by inserting himself within another family because he did not have a sponsor.

“I was at the bridge, around 3 p.m. or 4 p.m. on April 17, when I saw three people who apparently died from the crowded conditions,” he said, describing the chaos at the bridge. “They were old. From a distance, I saw how one father, a heavy-set man, lifted his two young children, perhaps 5 or 6 years old, and threw them into the Euphrates, before jumping in after them. There was a lot of screaming, but it was so crowded no one could move. The security forces did not attempt a rescue.”

When Ramadi fell to ISIS on May 17, another 69,000 people fled, according to the United Nations. Within one day, Baghdad authorities closed the bridge entirely, even to those with a sponsor, leaving thousands stranded, before reinstating the sponsorship system a few days later, Abu Lujan, an electricity worker who fled Ramadi in May, told Human Rights Watch.

The majority of Ramadi residents remain within Anbar province, the UN said. Abu Lujan said that he is in the town of Amiriyat al-Fallujah because without a sponsor he could not get to Baghdad. The UN has been able to access displaced people, set up camps, and distribute aid.

Sunni Arabs attempting to enter the Kurdish region of Iraq by land, though not by air via the airports in Erbil and Sulaimaniya, also require a local guarantor. These restrictions have left thousands of displaced people from the Tikrit area in Salah al-Din province stuck in Kirkuk, where relations between Kurds, Turkmen, and Sunni Arabs remain tense. Human Rights Watch spoke with seven displaced people from Salah al-Din in Kirkuk in April and May.

According to the UN Guiding Principles on Internal Displacement, internally displaced persons have “the right to seek safety in another part of the country” and “to be protected against forcible return to or resettlement in any place where their life, safety, liberty and/or health would be at risk.” On May 15, Chaloka Beyani, the United Nations special rapporteur on the human rights of internally displaced persons, concluded a visit to Iraq, saying that he was disturbed by “reports of IDPs being barred entry” to Baghdad and other areas “on the basis of their identity,” and “deeply concern[ed]” about guarantor requirements.

Several thousand people from Anbar who have succeeded in entering Baghdad have flown from Baghdad to Erbil, apparently because they did not feel safe in the capital. Five Anbaris told Human Rights Watch that as Sunnis they felt threatened by Shia militias and government security forces in Baghdad.

On May 14, Shia pilgrims on the way to the Imam Kazhim shrine passed through Baghdad’s mostly Sunni Adhamiyya neighborhood. Video evidence reviewed by Human Rights Watch shows some shouting anti-Sunni slogans. The houses of Sunnis and a Sunni religious endowment building were set on fire, drawing condemnation from the UN.

Human Rights Watch learned from family members of one kidnapping for ransom of displaced people from Ramadi at a checkpoint in Baghdad in April, apparently by self-described Shia militia members, but the family did not want to make details public, fearing further attacks.

Human Rights Watch spoke with two Ramadi women who survived a separate deadly attack on their family home in Baghdad. The family, of the al-Bu Nimr tribe in Ramadi, had left Ramadi in October 2014 and moved to Baghdad’s Jihad neighborhood in late January 2015 after finding a guarantor and registering with the local police.

On April 28, four unidentified men who appeared to be security officers entered the home, saying they were there to conduct a search. Family members said the men wore masks and that some were in the blue uniform of the Federal Police and others in desert camouflage military uniforms.

The intruders gathered all valuables from the women, and took away eight blindfolded men, then shot them in the head at the nearby al-‘Abbasi school, and called the police to collect the bodies, the women said of the police’s account to them. Falah Sabr Nijras, 48, survived.

The wives of two of the Nijras family men said they left for the Kurdish region a few days later, and had Falah transported to a hospital, where he is recovering, unable to speak, but able to write and point. Iraqi police did not take their statements, they said, and they are unaware of any investigation into the killing. The Iraqi authorities should immediately open an investigation into the attack, Human Rights Watch said.

“Iraqi authorities should do more to protect Sunnis from violence whether from militias or criminal gangs,” Stork said. “The Iraqi government needs to make sure that people fleeing the Anbar violence can reach safety, not live in fear of the fighting or of hate crimes against them.”