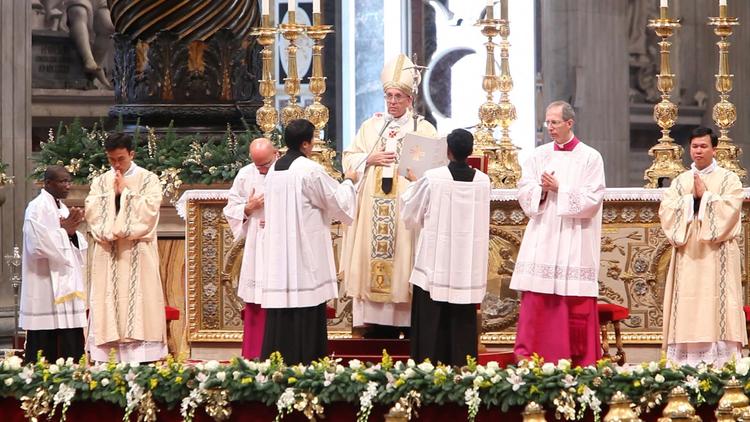 Leader of Catholic Church says the richest owe the poorest a ‘great social debt’ for creating the climate crisis, ignoring warnings of its dangers, and refusing to act

‘The climate is a common good, belonging to all and meant for all,’ reads Pope Francis’ encyclical on the environment which also says the most developed nations owe a ‘grave social debt’ to the poorest people on the planet who are being disproportionately and negatively impacted by human-caused global warming. (Photo: NASA/Wikimedia Commons)

A message to leaders and supporters of the Roman Catholic Church by Pope Francis, cataloging the threat of climate change and the moral imperative to act aggressively to combat its root causes, is being heralded around the world on Thursday as a powerful—even ‘radical’—statement from one of the world’s most recognizable religious leaders.

“What makes the pope’s message so radical isn’t just his call to urgently tackle climate change. It’s the fact he openly and unashamedly goes against the grain of dominant social, economic and environment policies.”
—Steffen Böhm, Sustainability Institute at University of Essex

Released in the form of a 180-page Papal Encyclical (pdf)—a formal letter to all the bishops of the church—the document codifies an official message from the spiritual leader, who makes the case that acting on climate change is not just a matter of decreasing the amount of greenhouse gas emissions that are fueling global warming, but also involves addressing the inequities and injustices caused by the fossil fuel-driven economy and resulting climate change.

“This home of ours is being ruined and that damages everyone, especially the poor,” reads the pope’s message on the environment, climate, and social justice.

The climate is a common good, belonging to all and meant for all. At the global level, it is a complex system linked to many of the essential conditions for human life. A very solid scientific consensus indicates that we are presently witnessing a disturbing warming of the climatic system. In recent decades this warming has been accompanied by a constant rise in the sea level and, it would appear, by an increase of extreme weather events, even if a scientifically determinable cause cannot be assigned to each particular phenomenon. Humanity is called to recognise the need for changes of lifestyle, production and consumption, in order to combat this warming or at least the human causes which produce or aggravate it. It is true that there are other factors (such as volcanic activity, variations in the Earth’s orbit and axis, the solar cycle), yet a number of scientific studies indicate that most global warming in recent decades is due to the great concentration of greenhouse gases (carbon dioxide, methane, nitrogen oxides and others) released mainly as a result of human activity. Concentrated in the atmosphere, these gases do not allow the warmth of the sun’s rays reflected by the Earth to be dispersed in space. The problem is aggravated by a model of development based on the intensive use of fossil fuels, which is at the heart of the worldwide energy system. Another determining factor has been an increase in changed uses of the soil, principally deforestation for agricultural purposes.

Though a draft of the encyclical, leaked earlier this week, gave a sense of what Francis’ message would be, the Guardian notes that the document is “not only a moral call for action on phasing out the use of fossil fuels, as was expected,” but is also “infused with an activist anger and concern for the poor” that castigates “the indifference of the powerful,” including government leaders of the richest nations and the industrialists who profit most from the fossil fuel paradigm.

In his letter, Francis charges that the world’s most developed countries, which have benefited most from the use of coal, oil, and gas, owe a “grave social debt” to everyone else. “The developed countries ought to help pay this debt,” Francis states, “by significantly limiting their consumption of non-renewable energy and by assisting poorer countries to support policies and programs of sustainable development.”

In the letter, the pope chastises those who would ignore the growing crisis despite all the warnings from the scientific community and beyond. It continues:

Many of those who possess more resources and economic or political power seem mostly to be concerned with masking the problems or concealing their symptoms, simply making efforts to reduce some of the negative impacts of climate change. However, many of these symptoms indicate that such effects will continue to worsen if we continue with current models of production and consumption. There is an urgent need to develop policies so that, in the next few years, the emission of carbon dioxide and other highly polluting gases can be drastically reduced, for example, substituting for fossil fuels and developing sources of renewable energy. Worldwide there is minimal access to clean and renewable energy. There is still a need to develop adequate storage technologies. Some countries have made considerable progress, although it is far from constituting a significant proportion. Investments have also been made in means of production and transportation which consume less energy and require fewer raw materials, as well as in methods of construction and renovating buildings which improve their energy efficiency. But these good practices are still far from widespread.

Though acknowledging his message is aimed at the bishops and followers of one specific church, secular advocates for climate justice and international campaign groups welcomed the message as a powerful statement from an undeniably influential and global voice.

As Kumi Naidoo, head of Greenpeace International, stated: “Everyone, whether religious or secular, can and must respond to this clarion call for bold urgent action.”

And Lucy Cadena, climate justice campaigner for Friends of the Earth International, said her group welcomes the pope’s explicit connections between poverty, inequality and the need for climate justice. “Pope Francis is right to say that there is a moral imperative to act on climate change with the utmost urgency and ambition,” she said. “He is a friend of the earth and of the poorest and most vulnerable. Addressing climate change is a matter of justice: those who have contributed least to causing the crisis are suffering the greatest consequences.”

Nicholas Stern, the British economist and author of an influential report on climate change, said the pope’s encyclical was of “enormous significance” because it could guide other leaders to follow suit. “Moral leadership on climate change from the Pope,” Stern said on Thursday, “is particularly important because of the failure of many heads of state and government around the world to show political leadership.”

Declaring that the pope’s message, in fact, is addressed people of all faiths as well as those who do not adhere to any religion, Janet Redman, director of the climate program at the Institute for Policy Studies, said Francis has challenged “the entire human community to take an honest look at the foundations of our society that has created wealth for some at the expense of the planet. The Pope has drawn a significant connection between our individual responsibility to care for creation and for each other, and the way we build the global economy.”

And his message is “crystal clear,” argues Redman. “The current development model, based on the intensive use of coal, oil, and even natural gas, has to go,” she said. “In its place, we need renewable sources of energy and new modes of production and consumption that rein in global warming. Taxing carbon, divesting from fossil fuels, and ending public corporate welfare for polluters can help end the stranglehold dirty energy companies have on our governments, economies and societies.”

Many people, including author and activist Naomi Klein earlier this week, have expressed surprise and gratitude that Francis is willing to push boundaries by linking climate change and capitalism, the role of economic inequality, the machinations of consumerism, and the long-held (but largely ignored) demand that the global North owes the global South a significant social and financial debt when it comes to paying for the damage its done to the planet over the last hundred years or more.

As Steffen Böhm, director of the Sustainability Institute at University of Essex, notes, what makes the message “so radical isn’t just his call to urgently tackle climate change. It’s the fact he openly and unashamedly goes against the grain of dominant social, economic and environment policies.” Böhm praised the pope’s bold announcement, because “untainted by the realities of government and the greed of big business, he is perhaps the only major figure who can legitimately confront the world’s economic and political elites in the way he has.”

Speaking to the idea of what climate justice means in practice, Winnie Byanyima, international executive director of Oxfam International, said that because “gross and growing inequality between rich and poor has been made worse by the climate crisis” and “the emissions of the rich are driving weather extremes that hit the poorest hardest,” there is no other pathway than addressing both concerns as a single problem. According to Byanyima, “Only when world leaders heed the Pope’s moral leadership on these two defining issues, inequality and climate change, will our societies become safer, more prosperous and more equal.”

“The language of the climate justice movement has just been adopted by the pope.”
—Naomi Klein, author and activistIn the end, Böhm says the pope’s historical statement will help establish in the mind of the global population that the “time for bold, radical action on the environment as well as poverty eradication has come.”

Klein, who literally wrote the book on this subject and appeared on Democracy Now! Thursday morning to discuss Francis’ message, might be hard pressed to put it better. Perhaps most notable, she explained, is how closely the message that Francis has formalized as the church’s position corresponds to the critique articulated by activists and experts like herself. “The language of the climate justice movement has just been adopted by the pope,” she said.

If you support Common Dreams and you want us to survive, we need you now.
Please make a tax-deductible gift to our Mid-Year Fundraiser now!