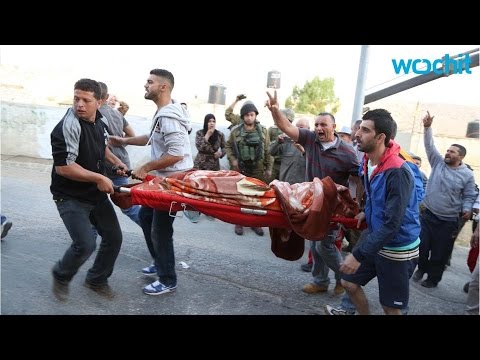 The army said on their Twitter feed: “Three civilians were injured & are receiving emergency treatment. The assailants fled the scene. Forces are searching the area.”

Separately, Israeli news site Ynet reported that four Israelis had been injured in the attack, including one seriously.

The report said the Israeli settlers were driving north through the occupied West Bank when they came under fire from a car travelling in the other direction.

Ynet published images of a bloody car with a bullet-riddled door.

Palestinian locals told Ma’an that Israeli forces had arrived on the scene and were beginning a search operation.

They added that dozens of soldiers stormed the nearby village of Qaryout and imposed a curfew.

A Ma’an reporter said that Israeli soldiers had set up military checkpoints on the road between the site of the shooting and Nablus, and were firing dozens of flares into the sky.

The shooting comes following a string of “lone-wolf” attacks by Palestinians on Israeli military and civilians in recent months.

Earlier on Monday a Palestinian woman was arrested after she stabbed an Israeli soldier at the 300 checkpoint in Bethlehem, and another Palestinian was shot after stabbing an Israeli border policeman in occupied East Jerusalem on June 21.

An average of two Israeli civilians per week have sustained injuries by Palestinians so far in 2015, with one Israeli killed, according to the UN Office for the Coordination of Humanitarian Affairs.

In the same time period, however, an average of 39 Palestinians have been injured by Israeli forces per week and 13 killed, including two since the beginning of this month.

The number does not include incidents of injury by Israeli settlers on Palestinians in the West Bank.