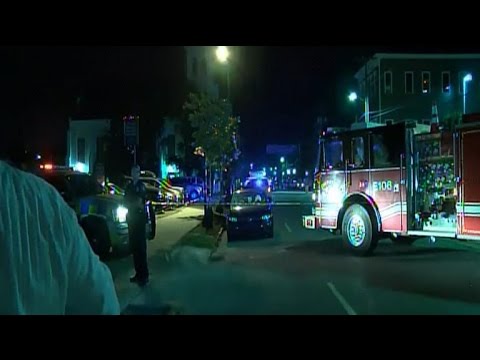 Update: Suspected shooter Dylann Roof has been apprehended. He had a gun with him at the time. It is being alleged that he wore Apartheid South Africa flag, complained of African-Americans raping, taking over US. So, then, it was political and indubitably terrorism.

Police in Charleston, S.C. have termed the shooting deaths of at least 9 people at a black church by a young 21-year-old white man Wednesday night a “hate crime.” The perpetrator also made a bomb threat against the downtown. The shootings took place at the historic Emanuel AME Church, which played a key role in the Civil Rights movement. Although the fact that the police knew the man’s age suggests they also knew his identity, it wasn’t revealed Wednesday night.

South Carolina Nikki Haley, herself of Indian origin, was criticized for her Facebook posting,

Michael, Rena, Nalin and I are praying for the victims and families touched by tonight’s senseless tragedy at Emanuel AME Church. While we do not yet know all of the details, we do know that we’ll never understand what motivates anyone to enter one of our places of worship and take the life of another. Please join us in lifting up the victims and their families with our love and prayers.”

Given that Gov. Haley has supported flying the Confederate flag from the statehouse, here incomprehension provoked a good deal of derision:

Cant make this up: S. Carolina governor who defends flying confederate flag at statehouse can't understand what motivates someone to do this

South Carolina has one of the biggest African-American populations, proportionally, of any state in the nation, at about a third of the roughly 4 million residents. Some 73 percent of whites there believe that the Confederate flag should fly not just on the grounds of the statehouse but above its dome, as used to be the case a decade ago. 61% of African-Americans disagreed. African-Americans see the flag as a defense of slavery and racism, while South Carolinian whites see it as a way of honoring the war dead on their side in the Civil War.

@nikkihaley Governor, "we'll never understand" sounds to me like giving up. We can not afford that. #BlackLivesMatter #CharlestonShooting

In other kinds of terrorist attacks, you don’t typically hear such fatalistic pronouncements. Officials don’t say, well, we’ll just never understand why they do these things. They say we know why they attack, it is because they hate our values, and we now have to spend trillions of dollars to combat them. This guy in Charleston obviously hates American values. But the governor is just urging resignation. No one will call for a ‘war on hate crimes.’

CNN called the shooter a “gunman.” I complained about this wimpy diction in my “Top Ten differences between White Terrorists and Others”.

A pic of Martin Luther King Jr @ the Emanuel AME Church in #Charleston. Praying for the church & all impacted. So sad pic.twitter.com/9MOz1kqibM

This was obviously an act of terrorism, which is what it would have been called if carried out by a non-white person. There was even a bomb threat! Terrorism can also be a hate crime if conducted on an ethnic basis. Middle Easterners had no difficulty seeing the resemblance between this racial violence and the religious/ethnic violence in their region:

First picture: Attack on a mosque in #Sanaa. Second picture: #CharlestonShooting attack on a church in the US. pic.twitter.com/JETYsXCnoL

Observers wondered why cable news did not go into its 24/7 *there is only one story* mode at this news, which broke around 9 pm. Fox Cable News aired a long interview with Donald Trump.

Why am I getting more information about the #CharlestonShooting from twitter than I am from @CNN @FoxNews @MSNBC @ABC @NBCNews @CBSNews?

If a Muslim who had walked into McDonalds and killed 9 diners, was still armed and at large, there would be blanket coverage.#Charleston

And, wait for it…

Interesting. The suspect is unknown and at large. But already he being discussed as mentally ill? Oh, okay. #CharlestonShooting