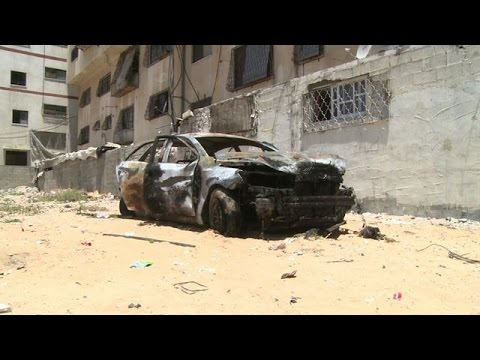 GAZA CITY (Ma’an) — Five car bombs targeting the armed wings of Hamas and Islamic Jihad went off in near-simultaneous blasts on Sunday morning in the center of Gaza City and its northern neighborhood of Sheikh Radwan.

Witnesses said the explosions that went off at around 6:30 a.m. appeared to have been caused by bombs placed underneath the cars parked in front of their owners’ homes.

Shrapnel from the blasts hit residential houses, shattering windows and lightly injuring two people who were transferred to a local hospital.

There were no reports of serious injuries.

According to witnesses, the explosions occurred within an interval of 15 minutes.

Graffiti on a wall near one of the bombs reportedly read “Daesh,” the Arabic acronym for the Islamic State group (IS), although no group has claimed responsibility for the attacks.

Police working under Hamas, the movement that rules the Gaza Strip, did not say who they believed was responsible, but vowed action against the culprits.

“Security forces have opened an investigation and are searching for those responsible. We assure that the criminals will not escape punishment.”

The explosions appeared to be intended as a warning rather than an attempt to inflict casualties given the early hour, as has occurred with previous incidents.

Since last summer’s devastating war in Gaza, there have been growing signs of internal unrest between Hamas security forces and other militant groups, with a string of small-scale explosions.

Sunday however marked the first time Islamic Jihad was targeted, in an indication the group is viewed as part of the establishment in Gaza.

Many of the more recent attacks are believed to be the work of fringe Salafist groups that have made a name for themselves as unafraid to challenge Hamas, seeking to outbid them in the fight against Israel and the defense of Islam.

There have also been attacks claimed by groups purporting to be from an IS branch in Gaza, although such claims have so far been largely discredited by online militant forums.

According to witnesses, the five explosions in Gaza City on July 19, 2015 occurred within an interval of 15 minutes and three of the cars were said to have belonged to members of Al-Qassam and two to members of Al-Quds. (AFP/Mohammed Abed)

Salafis are Sunni Muslims who promote a strict lifestyle based on the traditions of early pious ancestors. While the vast majority of Salafis in Gaza are apolitical, a violent fringe has emerged in recent years.

Hamas has in the past cracked down hard on all Salafis, particularly as the religious group enjoys the support of Fatah.

But more recently Hamas has targeted the more extreme groups, which it views as a threat to its power.

Experts warn that the appeal of extremist groups is growing, particularly among Gaza’s disaffected youth who have been particularly hard hit by conflict, grinding poverty and soaring unemployment and feel let down by traditional Palestinian nationalist movements.

There has been no confirmation from IS itself that it has a presence in Gaza.

However, a number of young Palestinians with few prospects have left Gaza to fight in Iraq or Syria, while others have been drawn towards extremist groups involved in a deadly insurgency against Egyptian forces in the Sinai Peninsula.

Gazans who have gone to fight with the IS in Syria recently released a video calling for Hamas to be toppled in the territory.

In May, mortar rounds were fired against a base for Al-Qassam in an incident claimed by a group calling itself Supporters of the Islamic State in Jerusalem, which has also taken credit for recent rocket fire into Israel.

Growing extremism has led some to renew their call for an easing of the crippling Israeli blockade against the Gaza Strip in hopes that conditions will improve. Gaza’s border with Egypt also remains strictly controlled.