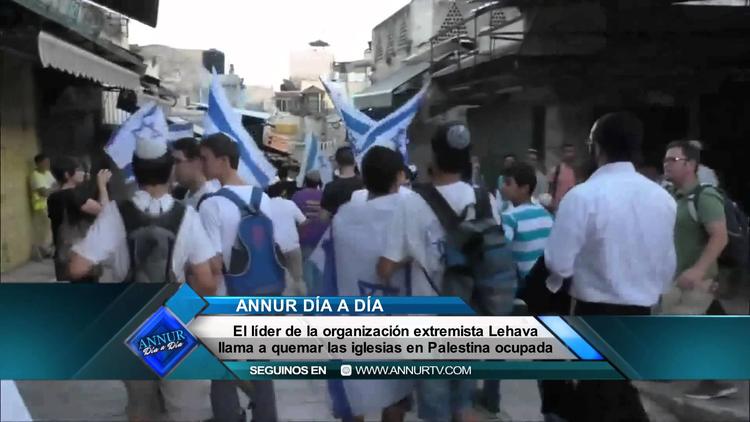 JERUSALEM (Ma’an) –The leader of a Jewish extremist group in Israel allegedly called for arson attacks on churches in front of Israeli students, Israeli media reported on Thursday.

Benzi Gopstein, leader of anti-Arab group Lehava, allegedly called for the burning of churches at a panel held this week for Jewish yeshiva students, using ancient Halachic, or Jewish law, to condemn what he called Christian “idol worship.”

When a journalist at the panel informed Gopstein that he was on camera and could be arrested for his comments, Gopstein said he is prepared to spend 50 years in jail for his remarks, according to a video of the panel released by the Haredi website Kikar Shabbat.

After the release of the video, Gopstein said he “stressed several times” that he was “not calling to take operative steps,” instead he said that it is “the responsibility of the government, not of individuals” to abolish the Christian practice of idol worship.

The Israeli government has taken steps to crack down on Jewish extremism over the past week, after suspected Jewish extremists torched two West Bank homes, burning an 18-month-old infant alive and critically injuring the baby’s mother, father and brother.

There has been a long line of attacks on Christian and Muslim holy places in both Israel and the occupied West Bank in which the perpetrators were believed to be Jewish extremists.

Despite announcements by the Israeli government in May 2014 to crack down on violent attacks carried out by Israelis against Palestinians, prosecution rates on Jewish extremist remain remarkably low.

NB: didn’t find an English-language clip on this incident & figured many readers can follow the Spanish.