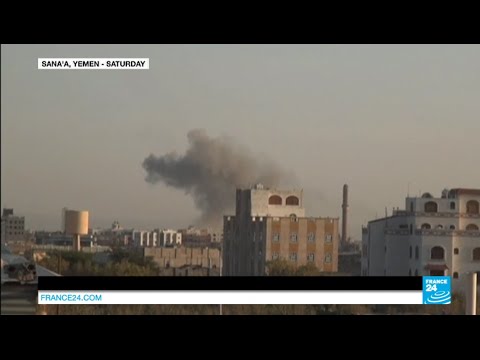 Many women and children among the dead in ‘mistake’ attack

Monday’s accidental attack on a Yemeni wedding party drew references to the United States’ December 2013 drone bombing of another wedding party in Yemen, which resulted in the death of the 15 people. (Photo: AFP)

Saudi Arabia-led airstrikes “mistakenly” struck a wedding party in Yemen early Monday killing at least 38 people, many of which were women and children.

The U.S.-backed coalition was purportedly targeting Shiite rebels, known as Houthis, when it bombed a celebration in al-Wahga, a village near the strategic Strait of Bab al-Mandab. One senior government official declared the two airstrikes a “mistake.”

According to the BBC, “First reports from the village said that 12 women, eight children and seven men had been killed, with dozens more wounded, when the air strike hit two tents during a wedding for a local man linked to the Houthi group.”

And the Associated Press notes that the village in which the strikes took place “lies in the battered Taiz province, where civilians routinely fall victim to daily Saudi airstrikes as well as rebel mortar shells.”

The United Nations estimates that roughly 4,900 people have been killed and more than 25,000 wounded in the six months since the Saudi-led bombing campaign began in March. Further, roughly 21 million of Yemen’s population of 25 million have been impacted by the conflict.

The incident immediately drew references to the United States’ December 2013 drone bombing of another wedding party in Yemen, which resulted in the death of 15 people.. .