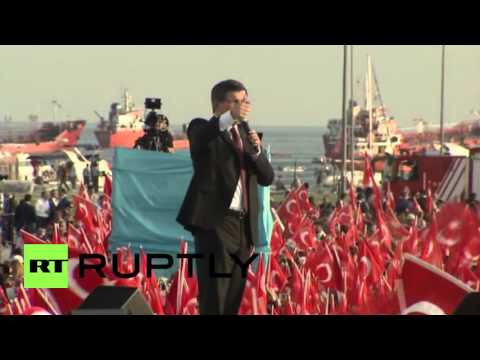 Though often depicted as a relatively stable exception in a turbulent region, the Republic of Turkey has also wrestled with burdens of the Ottoman Empire. Arguably, the most troublesome legacy has been the multi-ethnic and multi-religious character of post-Ottoman society, because even after the transition from Kemalist authoritarianism to multi-party democracy in 1950, the Republican regime has not adapted itself to the nature of society but continuously sought to mould it instead.

The will… of decision-makers in Ankara to create a homogeneous society out of highly heterogeneous communities is one of the few characteristics shared by all successive governments—regardless of their radical differences in ideological outlook.

While the Kemalists aimed to form a westernised, secular, exclusively Turkish nation; social conservative or centre-right administrations such as the incumbent AKP (Justice and Development Party) have been less dedicated to the idea of state-imposed secularism. Yet the maxim of ‘one nation, one state and one flag’—- recently ‘one religion’– can be argued to have been added by the AKP to this list—has remained intact. The harrowing yet unsurprising side-effects of this vision of homogeneity has been seen in the form of assimilation campaigns, mass deportations and massacres against those who have refused to conform. Just as Islamists challenged Kemalist rule, minority groups such as Kurds and Alevis have also resisted top-down impositions of identity. As a result, contemporary Turkey is inhabited by a deeply polarised society and the state has been engaged in a violent conflict with an armed Kurdish organisation, the PKK (Kurdistan Workers’ Party), since the 1980s. Let us look at Turkey’s recent travails in dealing with its society before discussing its current predicament in an ever more unstable Middle East.

The rise and fall of ‘the Human Security Moment’

The so-called ‘Peace Process’, launched by the AKP administration in 2013 for the purpose of developing a peaceful resolution to the conflict with the PKK, was unprecedented in the history of Turkey in terms of its underlying rationale. The main idea behind the entire enterprise was publicly and strongly voiced by both the spokespeople of the government such as Beşir Atalay and the representatives of the Kurdish political movement such as the HDP (Peoples’ Democratic Party) co-chairperson Selahattin Demirtaş, namely their shared belief that this conflict could not possibly be resolved via the conventional approach of the Turkish state which securitised the issue and resorted to measures such as launching military operations against the PKK, arresting its sympathisers, imposing martial law in predominantly Kurdish provinces and banning successive pro-Kurdish political parties on charges of supporting terrorism.

In contrast with these earlier methods, the AKP ceased military operations as a response to the public declaration of ceasefire by the PKK on 23 March 2013, leading to a protracted negotiation process between the government, Abdullah Öcalan—the imprisoned leader of the PKK—the BDP/HDP and the PKK.

As part of the Peace Process, a committee that consisted of various well-known intellectuals, artists and journalists (Akil İnsanlar Heyeti) was established to inform the public about the negotiations and gain the support of the citizenry. A widely publicised slogan was ‘Let’s not allow mothers to cry any more!’. This succinct yet effective sentiment was utilised to help the public understand the main objective of the initiative: to prevent more people from becoming the victims of the 30-year old civil conflict that has caused immeasurable pain and suffering since 1984.

The mentality of the Peace Process and the approach of both sides of political negotiations at the time was derived from or at least influenced by an understanding of security that diverged from the hitherto pre-dominant narrative of governments, military and mainstream media. Conventionally, the concept of security had been invoked as a dedication to ensuring the salvation of the Turkish nation-state at all costs, a practice of governance based on a top-down organisation of state-society relations, exclusive nationalism and the frequent repression of minorities. Hence, the term almost entirely referred to national security, commonly used by government officials and newspaper columnists from the 1980s onwards to identify threats against the integrity of the idealised nation-state, the most commonly cited of these threats being the PKK—the so-called internal enemy—and its supposed external sponsors such as the USA, Israel, Syria, Iran or various EU countries.

The Peace Process represented a radical departure from the national security narrative, putting forward a human-centric imagination that prioritised the well-being of individual citizens over that of an abstract entity such as the state or the nation – arguably much more difficult to grasp and relate to. The aforementioned emphasis on the pain felt by mothers who lost their children to the conflict and various activities initiated as part of the process such as the ‘Peace and Fraternity Picnics’—which sought to bring Turkish and Kurdish youth together to foster empathy and solidarity between communities—were all indicative of a mind-set that stressed the value of human individuals and the need for mutual understanding to ultimately ensure the security of all peoples of Turkey.

This short-lived age of ‘the human security moment’ in Turkey seems to be over today. In the run-up to the June 7 parliamentary elections of 2015, the discourse used by the AKP during its campaign displayed numerous signals of a change in attitude, with President Recep Tayyip Erdoğan declaring that there was no ‘Kurdish question’ in Turkey any more and that ‘all possible rights had already been granted’. In the aftermath of the elections—the 20 July Suruç bombing that resulted in the deaths of 34 socialist/pro-Kurdish activists and the ensueing assassination of two policemen rapidly increased the tensions between the government and the Kurdish political movement—the Peace Process came to an end and intense waves of violent clashes between state forces and the PKK began.

The entire country has been swept up in renewed conflict since then, as curfew has been imposed in hundreds of predominantly Kurdish districts, several mayors have declared ‘self-rule’ and got arrested for their pains and many HDP buildings have been attacked by Turkish nationalist groups seeking revenge for the PKK attacks on Turkish military and police.

As of September 2015, the human tragedy and overall death toll have already reached catastrophic levels. From June 2015 onwards, the socio-political life in the country has once again been heavily dominated by the national security oriented discourse as mainstream newspapers and television channels—regardless of their stance towards the AKP administration itself—have heavily utilised a jingoist language in an attempt to mobilise the Turkish public behind the so-called ‘war effort’. In this respect the HDP’s human security oriented discourse and mediator role needs to be perceived by both antagonistic actors.

Until the last few years, Turkey has been portrayed in international media and scholarly literature alike as a ‘role model’ of democratisation, Islamic moderation and pluralism for the Middle East and the broader Muslim world beyond the region. In this regard, the Peace Process and the AKP-led political reforms undertaken during the EU accession process had gained particular acclaim among numerous observers. However, the stalling of the EU accession talks, the collapse of the Peace Process and the dramatic return to the national security oriented discourse have completely changed the game in town. Currently, Turkey’s endeavours to develop a new social contract with its Kurdish citizens have failed and the country has once again entered a vicious cycle of violent conflict with the PKK, basically a ‘tit for tat war’ that breeds endless civil strife with the potential to spiral out of the control of all relevant actors at any point—as seen in conflicts that have arisen in post-revolutionary Middle Eastern countries since 2011 such as Libya and Syria.

Since the American invasion of Iraq in 2003, the regional balance of power has oscillated between Kurds and Arabs as well as Shias and Sunnis. The Kurdistan Regional Government (KRG) has gained de facto independence in northern Iraq after the fall of Saddam Hussein. However, peace and stability has neither been established in Iraq nor in its neighbour, Syria, which has also plunged into chaos following the uprisings of 2011 and the rise of ISIS (Islamic State of Iraq and ash-Sham). Consequently, violence has escalated and expanded in the entire southern border of Turkey, while a new Kurdish political unit—the Kurdish Democratic Union Party (PYD)—has strongly established itself in the form of autonomous cantons in Rojava, northern Syria. The rapid expansion of the military power and influence of ISIS in both of the post-Ottoman ‘failed states’ has meant that fear, torture, rape, kidnappings, and mass killings have all become part of daily life in the region, unleashing millions of refugees across the world.

Apart from becoming the main destination of refugees, Turkey’s role in the ongoing humanitarian crisis of the Levant has been relatively limited as the issue of Turkish foreign policy towards Syria and Iraq has been over-shadowed by domestic troubles. While the conflict with the PKK continues at full throttle, lynching campaigns and pogrom-like mass attacks have been launched by ultra-nationalist mobs against Kurds, further straining already problematic relations between the state and Kurdish citizens as well as resulting in new deep wounds in the psyche of Turkish and Kurdish communities.

The economy has been heavily damaged by political uncertainty and security concerns since the beginning of the summer as foreign direct investment levels have fallen, the number of tourists has dramatically decreased and the Turkish lira has rapidly devalued vis-à-vis the US dollar, reaching a record low. It is clear that the PKK-focused, national security oriented ‘new politics’ is the main factor that consumes Turkey’s energy, resources and it also constrains its role in the Middle East and beyond.

Not so long ago, when the Peace Process was ongoing and Turkey was strictly adhering to Prime Minister Ahmet Davutoğlu’s ‘zero problems with neighbours foreign policy’ in the early 2010s, the country possessed significant influence in terms of determining the course of events in its region. Today, a different Turkey and an AKP administration that constantly evaluates domestic and international issues through the lens of a narrow national securitisation perspective can be expected to remain occupied in a vicious domestic struggle for the foreseeable future—boding a grim future for all the peoples of the region and for the world that must face the consequences of events in some form or another, including the inflow of refugees.