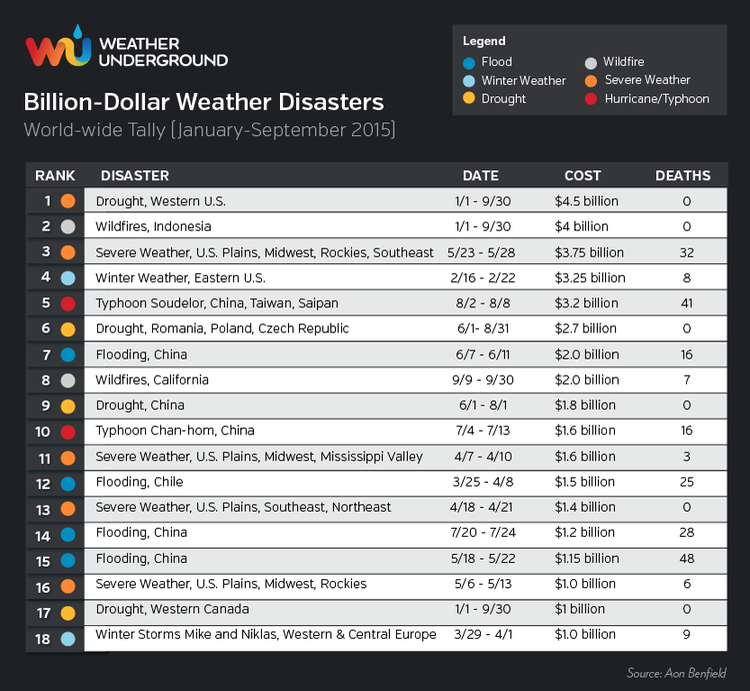 With many eyes turning to UN talks in Paris, Earth continues to exhibit symptoms of a planet on fire

How much is 2015 ahead of other recent warm years? It’s not pretty. “It’s just incredible to me. I’ve never seen anything like this before.”

That’s what Jessica Blunden, a climate scientist with the National Ocean and Atmospheric Administration (NOAA), told the New York Times in an interview following the agency’s release on Wednesday of new figures showing that last month was the hottest September since records began and offered further confirmation that 2015 is on track to be the hottest year experienced in modern human history.

Dr. Blunden pointed the Times to measurements in several of the world’s ocean basins, “where surface temperatures are as much as three degrees Fahrenheit above the 20th century average,” an increase described as “substantial” given the large size of these areas. “We’re seeing it all across the Indian Ocean, in huge parts of the Atlantic Ocean, in parts of the Arctic oceans,” she said. The bottom line, she added: “the world is warming.”

As Andrea Thompson at Climate Central
notes, the findings show that “September 2015 was not only the hottest September on record for the globe, but it was warmer than average by a bigger margin than any of the 1,629 months in [NOAA’s records]—that’s all the way back to January 1880.]

NOAA’s latest assessment on global temperatures arrives just weeks ahead of high-profile UN climate talks in Paris, where world leaders will once again come together with the stated goal of reaching an international agreement for addressing the runaway temperatures—and associated social, ecological, and financial costs—associated with global warming and climate change.

This table published by the Weather Underground, citing statistics generated by insurance broker Aon Benfield, shows that this year’s record temperatures also coincide with a 2015 that has seen numerous “billion-dollar weather disasters”—all of which were driven, or exacerbated by, the climate fluctuations scientists have warned would correspond with increased warming of the world’s oceans and atmosphere. 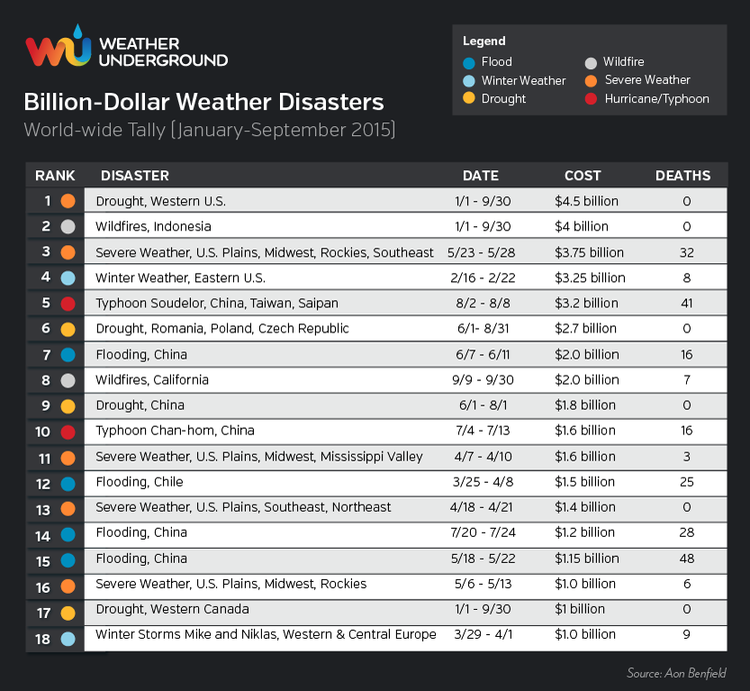 These trends, coupled with the myriad other dangers associated with life on a hotter planet, have turned much of the world’s attention toward what transpires in Paris when the COP21 talks begin at the end of November.

According to a recent piece by Brad Plummer at Vox.com, however—given the gap between what governments are pledging for the talks and what the science demands—the outlook is not pretty. Encapsulating the current situation with a “good news vs. bad news” paradigm, Plummer put it this way: “The good news: Every country is submitting a detailed pledge to curb greenhouse gas emissions… The bad: Those pledges, added together, aren’t nearly enough to keep us below 2°C of global warming. Short of drastic changes, we’re in for some serious shit.”

Meanwhile, commenting on developments at meetings in Bonn, Germany this week where climate ministers were preparing a draft text for Paris, Susann Scherbarth, a climate justice and energy campaigner at Friends of the Earth Europe, said the world’s richest and most polluting nations are wildly off-target when it comes to addressing the crisis.

“Emission-cut pledges made by rich countries so far are less than half of what we need to avoid runaway climate change,” Scherbarth said. “The draft Paris agreement on the negotiating table this week shows that many seem ready to accept irreversible and devastating consequences for people and the planet.”