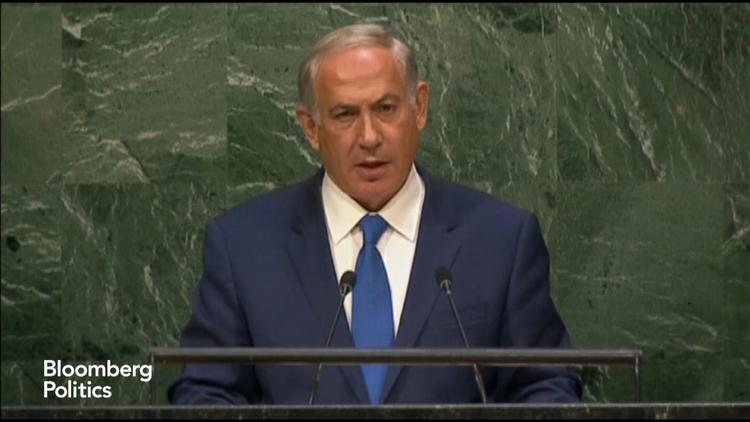 Netanyahu did have Mahmoud Ahmadinejad, disgraced former Iranian President, who with the support of Khamenei, would say one foul thing after another about Israel.

Hassan Rouhani speaks in New York City about stabilising the Middle East, September, 2014. President Hassan Rouhani speaks in New York City on stabilising the Middle East, September, 2014. Demotix/ Nancy Siesel. All rights reserved.On the surface it appears that no other two political leaders hate each other more than Ayatollah Ali Khamenei, the Supreme Leader of the Islamic Republic of Iran and Benjamin Netanyahu, Prime Minister of Israel. However, while no love is lost between these two fellows who would want to bring harm to each other’s nation, both have discovered that they badly need each other to cover up the messes they have created in their own respective countries and the region.

In early September 2015, Khamenei told the usual rent-a crowd audience that in 25 years there would be no Zionist regime, meaning Israel. This could not have come at a better moment for Netanyahu who was visiting London amidst enormous demonstrations and petitions demanding his arrest for human rights violations.

In the past Netanyahu had Mahmoud Ahmadinejad, the disgraced former Iranian President, who with the full support of Khamenei, would say one foul thing after another about Israel, whenever he needed to divert attentions from pressing internal problems. Ahmadinejad became the “Godsend” fellow who helped the successful elections of Netanyahu and Lieberman in 2009 and then again in 2013, by encouraging Iran to be seen as the “existential threat” to Israel.

With the failure of the hardline gangs to win the last presidential elections in Iran, Netanyahu could not get his favourite type of Iranian President. His efforts to frame the new president, Hassan Rouhani as a “wolf in Sheep’s skin”, was not successful either. However, this time the Ayatollah himself came to the rescue. Netanyahu’s staunch opposition to Iran/P5+1 Nuclear Deal might have placed the pragmatist factions of the Islamic regime in a more difficult position and helped the hardliner inside Iran, but the massive support of the Iranian people again changed the situation.

Many were surprised when Khamenei chose to attack the US administration and pulled out his anti-Israel card after the agreement was reached in Vienna. Khamenei was openly on the side of the hardliners, but circumstances forced him to support the deal, without which the Iranian negotiating team would not have dared to sign. It is revealed by some internal sources within the country that during the Lausanne round of negotiations in March 2015, under the pressure of the hardliners Khamenei decided to openly object to the negotiations. When Rafsanjani, a former President and a most influential leader of the pragmatist faction, found out, he met with President Rouhani and suggested that he should go to the Supreme Leader and hand in his resignation in the event that Khamenei announced his objection to the deal. Rouhani obliged and Khamenei who did not want to shoulder the blame for the failure of this very popular deal, gave in. Hence negotiations continued and led to the Vienna Deal in July.

Aside from the vast majority of the Iranian people, a significant number of the Pasdaran (Revolutionary Guards — IRGS) top commandants, supported the deal for their own self-interest. Most of these powerful military men, whose names were on the sanction list, are major industrialists, mining magnates, and developers, and unlike some of their counterparts who were benefiting from the anarchic situation of the sanctions, were suffering losses. The same was true for the sons of the top clerics, who despite their allegiance to their mostly hardliner fathers, were torn between their convictions (if any) and their business interests.

Signing the deal made the pragmatists of the regime, called “reformists”, more popular, and further intensified inter-factional conflicts and their confrontations with the more powerful faction of hardliners, known as “principlists”. The situation is more tense now given the two important elections ahead in just a few months; the Parliamentary elections, and the election of the Assembly of Experts (a 88 member all-Mullah body which selects the next Supreme Leader – and in whose eight-year tenure the present Supreme Leader Khamenei is likely to die). Both factions are trying very hard to have their mullahs “elected” to this Assembly for the crucial vote of selecting the new Supreme Leader.

Khamenei’s recent words against Israel should be understood in the context of his concern at being seen to be in a weak political position. This is despite the fact that notwithstanding the now popular support for the “reformists,” the hardliners can count on the formal-legal structure to reach their goals. In the bizarre electoral process of the Islamic regime, candidates for both bodies should be ratified by the Guardianship Council (a 12 member appointed body of clerics and Islamic lawyers which also acts as an upper House}. This powerful Council is totally under the control of the hardliners, and they can reject any candidate without any explanation. That is why, President Rouhani, anticipating that the Guardianship Council would reject most moderate candidates, for the first time questioned its authority in the ratification process. This led to immediate reactions, among others, by the head of the Islamic Guards who gave a warning to the sitting president. So did the Head of the Judiciary, another stronghold of the hardliners.

With increased inter-factional conflicts, both factions are exposing each other’s corruptions and embezzlements. Rouhani’s government has brought legal cases against top officials of the Ahmadinejad Presidency, and has put one of his Vice Presidents in jail. The hardliners have managed to put Rafsanjani’s son in jail, and have forbidden former President Khatami from any public and media appearances. Not to mention the continued house arrest of Mehdi Karubi, the former Speaker of the Parliament and Presidential candidate, and Hussein Moussavi, the former Presidential candidate who “lost” to Ahmadinejad through an electoral coup, which led to the mass uprisings and suppression of the “green movement” in 2009. Several “reformist” groups formed a new party in preparation for the elections and chose its Secretary General, who was quickly sent to jail by the Judiciary.

The “principlists” are divided and concerned about the upcoming elections. They are also worried about the presidential election that is a little far away. They feel that they may have a tough fight ahead in putting forward a candidate to compete with Rouhani or his Foreign Minister Javad Zarif, who has gained much popularity and fame in the process of the nuclear negotiations. Ahmadinejad is also trying to make a comeback. The hardliners were grooming the Commander of the Quds Brigade, General Qassem Soleimani as a possible candidate for presidency, but wrong calculations in the Houthi’s uprising in Yemen and not foreseeing the inevitable Saudi entry into the Yemen war, seem to have weakened his position.

Netanyahu is likely to know of these serious internal conflicts and confrontations within the Iranian regime. But he needs to present the regime as a homogenous and unified bunch that has nothing else in mind other than plotting for the destruction of Israel and preparing for another holocaust! He is not totally wrong in assuming that both sides are part of an oppressive Islamist regime. But he is wrong in presenting both factions as exactly the same, and alleging that they present a threat to the existence of Israel. Netanyahu and his right wing coalition need to use the politics of fear and present to the Israeli public and to the world the imagery of such a powerful external enemy, to divert attention form the very serious and real Palestinian issue, and Israel’s internal economic and social problems.

Nonetheless, regardless of how hard he tries, Netanyahu cannot divert world attention from the real issues that Israel faces. As evidenced by the very recent heightened tensions and confrontations in the West Bank, East Jerusalem and Gaza, without resolving Palestinian issues, halting the settlements, lifting the strangulation of the Gazan people, and working towards the establishment of a viable democratic and secular Palestinian state, Israel will continue to face increasing internal problems and further isolation.

Both Israeli and Iranian peoples need and deserve a different type of leadership. Iranians live under a brutal clerical-military regime and for now they do not have the possibility of changing their regime through a democratic process – something that the Israelis have, and we should hope that, instead of buying into the politics of fear, they would use this process to elect a pro-peace government.